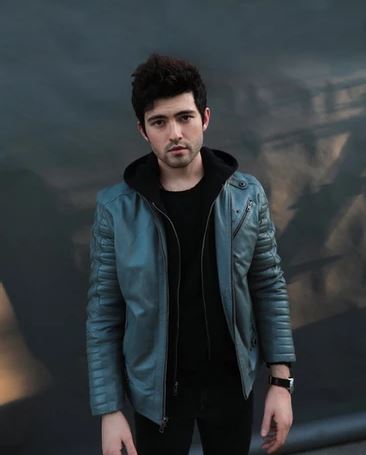 You may know Ian Nelson from his roles in such movies as The Boy Next Door, where he played alongside Jennifer Lopez, or from his leading role on There’s Johnny!, which you can watch now on Peacock! And though Ian is still working on a myriad of acting projects, he is also diving into a new industry: music. His debut single, 21st Century Love, hit all platforms today. We sat down with Ian to chat about his inspirations, how he got started with his music, and more.

Sam: What was your Inspiration behind your debut single?

Ian: “So, I’ve been singing since I was a little kid. I started off in musical theatre, and something that not a lot of people know about me is that I was a boy soprano; I sang in an opera when I was younger! That was my first professional job, so I’ve been taking voice lessons since I was very young. Recently, I started taking lessons with a new teacher in Los Angeles, who looked at me and was like, ‘you know you can’t keep singing covers for the rest of your life, right?’ Typically, as an actor, you have audition songs, which are technically covers. That shocked me; I had never heard that before, that I should write my own songs.

Ian goes on to share that his first foray into songwriting was working on the songs for a musical he was writing.

Ian: “Once I finished the book for the musical, I started working on the songs. But the structure of musical theater songs is very different from that of pop songs.”

As Ian finished writing his musical, he traveled to upstate New York to work on his upcoming film, Paper Spiders.

Ian: “I took my guitar with me up to the set and immediately started researching how to write pop songs. I wrote my first song when I was on set, and when I got back to LA, I recorded a demo with a friend. From there, my voice teacher introduced me to producer Jacob McCaslin. He took a listen to my demo, and liked it. Then I showed him this other song I had been working on. At the time, it was just called “I fell in love with you on a screen,” and there wasn’t much of it, but when I played what I had for Jacob, he immediately ran to the piano and began essentially finishing the song with me.”

As for the inspiration for “I fell in love with you on a screen,” now called 21st Century Love?

Ian: “I was on a dating app, and I saw this gorgeous girl with long red hair and freckles, like in the song. I don’t know how to describe it, but there was an added level of importance to this interaction. I think we’ve all been on dating apps and match with people we think are attracted to and stuff, but you can’t really tell if it’s real. But there was this weird aura surrounding this moment. I was sitting at my desk, and was like ‘okay, there’s something weird happening here.’ So I just started to write down everything I was feeling. It was poetry, essentially. And that became the inspiration for the song. When I wrote down the line “I fell in love with you on a screen,” I was like, huh, that’s interesting. This total illusion of seeing a photo…and the mind just takes off. A lot of what the song’s about stems from the observation of how we live in such a technological world, and how the distance between us creates this very sincere desire for connection. Yet, with our circumstances, especially with Covid, we’re very distant and the song is unfortunately more relevant than ever. We need that connection so badly, and the connections we make online can be just as real as meeting someone on the street. The way I see it, the internet and dating apps just make it easier to connect with the people who are supposed to help us on our journey and vice versa, without the limits of proximity. It’s made the ability to connect with people more immediate.”

Ian: “One thing I’ve noticed is that a lot of music is made on laptops these days. It’s a plus, and a minus; it makes it more accessible to more people, but sometimes I feel like some of the soul is lost from the music. Some songs are very cookie cutter. And some of those cookie cutter songs are really terrific, but something I love about my producer is that he sits down and plays the music rather than generating it with a computer. It creates such an amazing feeling. There’s a guitar riff in my new song that has such longing, and brooding, and soul. You can’t recreate that with a computer. I think we need to maintain some of the messiness in the sound along the way.”

Sam: Can you speak to the importance of using emotion in acting versus in music and how the experience is different in each medium?

Ian: “You’re always playing a character. Creating a song is like creating a character, just like in acting. You’re using your own emotions, and using the song or character in the scene as a vessel for the emotion. I really treat acting and music as the same when it comes to emotion. You start to learn more about yourself, more about your voice, and it’s really just about telling a story. That’s what everyone is trying to do, whether you’re a violinist or a dancer or a singer. You’re trying to convey a story through your art. I love songs because they’re really just vessels for emotion. For acting, you need a lot of time, money and crew, but with music, all I need is me and my guitar. It’s a more immediate expression than acting.”

Sam: Next, my favorite question: what’s something you’ve always wanted to be asked in an interview, but never have been?

Ian: “You know what it might be? “What are you proudest of?” Not what project I’m proudest of, but outside of that. A lot of times, as an actor, you really only get to talk about your craft when you have some level of success. No one really knows the experience that artists go through to get to that place where they can make something. I don’t really care about people understanding me; I understand that as an actor, feeling things deeply is part of my job. Forget the projects, forget the songs: I’m most proud of my ability to show up for myself. As an artist, no matter how successful you are, you’ll hit roadblocks. You’re constantly bumping up against your limits of expression, of your own knowledge. It impresses me when I keep going when I hit these limits and roadblocks. I wish people would talk about the experience of creating rather than success. People see my Instagram and think I’m happy all the time, but that’s not true. I wish artists would glamorize their experiences less. I don’t know why acting and music are held above everything else. It’s a strange hierarchy that I’ve thought about a lot. When watching a movie, people seem to revere the mirror they see there. I don’t understand it.”

Sam: Thanks so much for chatting with me! What’s next for you in the music and acting worlds?

Ian: “We just shot a music video for the second song. It’s completely different from the first one! And the song…it’s very good. We’re recording the third song right now, and I think it’s really beautiful. It’s very different from the first two. In acting, I have a new film out, Paper Spiders, that’s making the festival circuit and winning some awards, so that’s been exciting. That was the set I wrote my first song on. The director especially has been so supportive of my music, so it’s so cool that this film is coming into the world as the same time as the music. Other than that, I’m working on producing a film, doing some writing, and trying to stay creative. I’m happiest when I’m making stuff.”

A huge thanks to Ian Nelson for sitting down and chatting about his new music and upcoming projects. Listen to 21st Century Love below, and be sure to follow Ian on social media. We can’t wait to see what he does next!