Texts From A: The 13 Most Bonkers Lies Told in Season 5 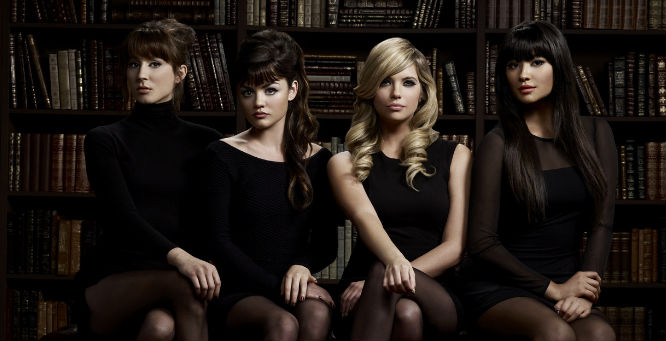 Hello, friends, and welcome to Texts From A, where I’m binging Pretty Little Liars and telling you all about it! As I write this, we’re only four days out from PLL leaving Netflix, and when this is posted, it will either by gone or going in a few hours.

So hopefully you’ve already finished your binge by the time you read this. Personally, I’m just getting into season seven and have eighteen episodes left.

But we’re not here to talk about season seven yet. There’s a couple more weeks before we do that. No, we’re here to talk season five, and the biggest lies told in it.

1. When everyone convinced themselves that Shana was “A” even though she never actually confessed to that and the timing matched up exactly zero percent.

2. Alison deciding to tell the police that she had been kidnapped the night she went missing and held prisoner ever since.

4. Mona twisting her fight with Alison to make it look like Alison was threatening her with a return to loserdom just to threaten her, when actually Alison was responding to Mona’s threats.

5. This isn’t strictly a lie, but I have to talk about how Caleb returns from Ravenswood and Ravenswood, the failed supernatural Pretty Little Liars spin off, all traumatized from his time there, and after weeks of hiding the pain, he ends up telling Hanna the truth about all the supernatural shit and she just, uh, goes with it? And it basically never comes up again except with a psychic thing later. They definitely never tell anyone else, “Hey! Ghosts and psychics are real!”

6. The lie the show told me by letting me believe that they’d introduced an adult male character who isn’t total trash in Piper’s new fiance, only for him to come on to Hanna.

7. Alison having Noel Kahn break into her house to threaten her because…reasons? More lying to back up the big kidnapping lie?

8. Alison PAYING A MAN to CONFESS TO KIDNAPPING HER. That is how far she’s taking this! She hunted down a man WHO, BTW, STABBED HER AND STOLE HER SHIT, and pays him to CONFESS TO THE POLICE THAT HE KIDNAPPED HER.

9. Mona absolutely could not let things just be even, by the way, because she fakes her whole-ass death in order to frame Alison for murder. 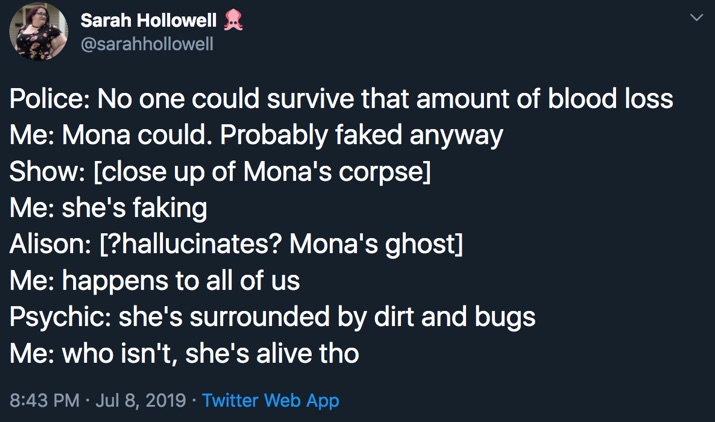 10. This also isn’t lie-related, but I canNOT let the Christmas episode go un-commented on. 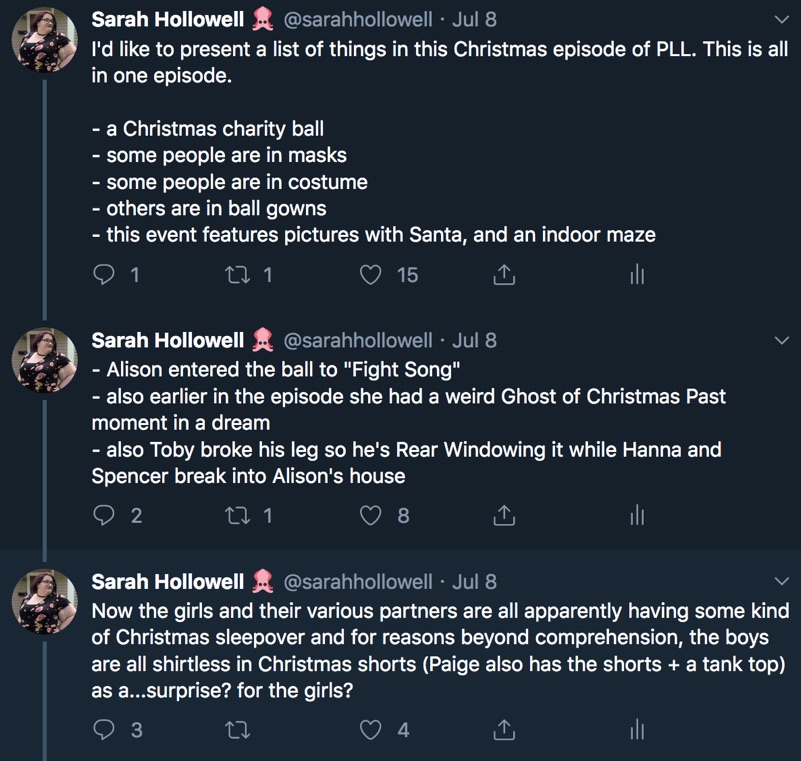 11. Aria getting so goddamn close to self-awareness when she writes an essay about how secretly dating an older man in high school was damaging and stole her opportunities to have a normal life with friends her own age, and then sends it to Ezra’s ex (Jackie, from a few seasons ago?) who works admissions at the college Aria is trying to get into.

12. Emily’s new girlfriend 1) lying about being married, 2) lying to Emily about her marriage being open and 3) lying to her husband by telling him Emily is just an experiment.

13. A friend of Mona’s lying in court about the girls threatening her and acting suspicious (and then in the next season getting pissed at the actually-alive Mona because she…willingly perjured herself? Like I think that’s on you, girl.)

And then the whole season ends in the girls getting kidnapped and trapped in A’s giant underground maze-prison and forced to do elaborate play-acting to atone for their sins, Saw-style, minus the death.

Because of course it does.

Sarah Hollowell is a fat Hoosier writer working to up the magic quotient of Indiana. She's been published on Huffington Post, Fireside Fiction, and Apex, among others. She spends most of her time binging podcasts and needle felting characters from Animal Crossing.
All Posts
PrevPreviousExclusive: Cover Reveal of All the Befores by Samantha Chase
NextDaily Frolic: Shakespeare Themed Cards Against Humanity? Sign Us UpNext