Texts from A: The Case Against Ezra Fitz Using Evidence From Season 4 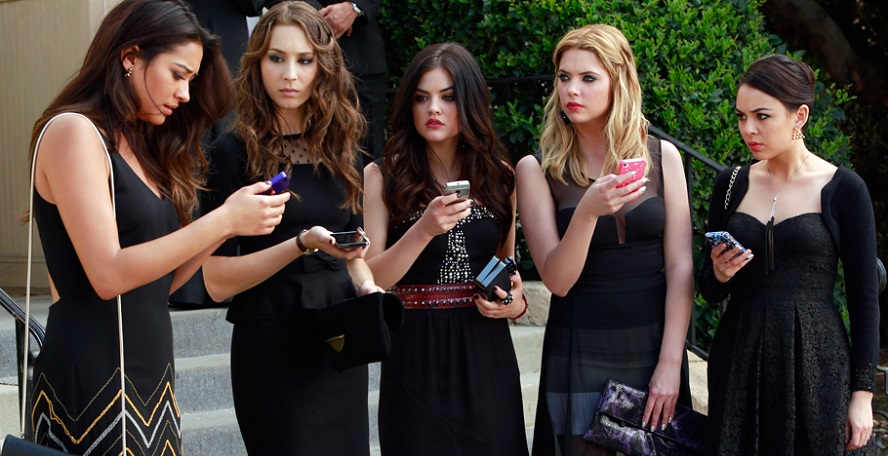 Hello, friends, and welcome to Texts From A, where I’m continuing my first-time binge through Pretty Little Liars (which leaves Netflix July 27th, everyone!!) and telling you all about it, season-by-season. We’re on season four now. I wrote seasons two and three in listicle format and I intend to go back to that for 5-7, but season four is different.

I’ve made no secret of hating Fitz. Don’t get me wrong, I understand why Aria/Ezra is a popular ship from the show, I get why people ship it. I’m against it in the show, but I’m not against it as a ship. 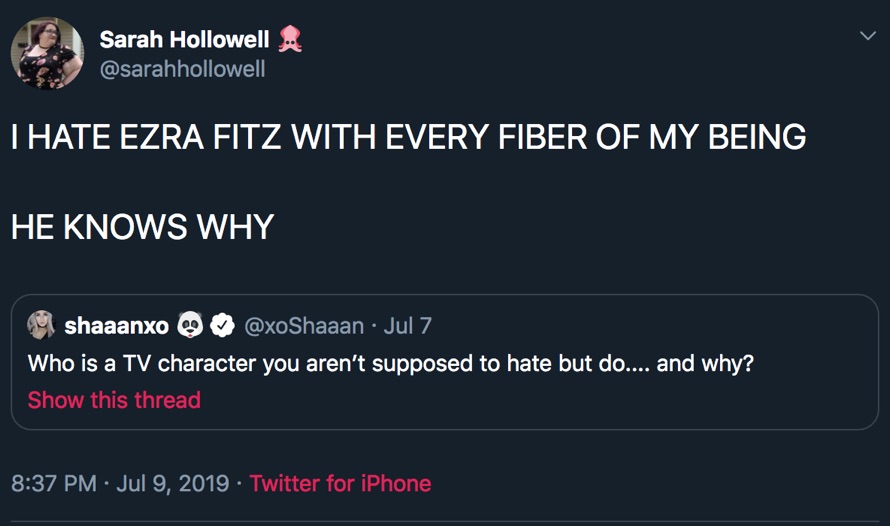 Season four is the season of Ezra Fitz. Under most circumstances, this would make me both grumpy and bored, as those are my default emotions when Fitz is on screen.

But again – season four is different.

In season four, we’re given reason to believe that Fitz might not just be a creepy older man with a trust fund who pretends to be poor while dating his underage student.

(He’s not. This is one of the many terrible things about him. He couldn’t even be interesting enough to be A.)

(But also I’m only halfway through season six, so, for all I know, there will be another twist by the end of the show and SURPRISE he really is A. Or an A, as there are many A’s. This whole A thing has actually not become less confusing.)

Somehow I came out of this season ultimately hating Fitz more than I ever had before. He went from being “ugh the worst” to “I WISH HE’D DIE OF THAT GUNSHOT WOUND”.

So what happened in season four to make Fitz more hateable than ever?

Some of it isn’t technically his fault – it’s the writers.

(I mean, I guess if you want to get really technical, everything is the fault of the writers since Ezra Fitz, fictional character, doesn’t have agency over his own life.)

In season three, we learn that Fitz got his high school sweetheart pregnant, and that she had the child and kept it secret from him for years after his mom blackmailed her into disappearing.

…And in season four that is quickly disposed of because actually she was lying, the kid wasn’t his, it was someone else’s, and she let Fitz believe he was the father for…reasons? She and her son move away and uh that’s…it.

I’m in season six and she has never been mentioned again. What was the point of this storyline? To break Aria and Fitz up? Because there’s many other reasons they could have and should have broken up that have nothing to do with, “Here’s your kid! Oh no he’s not your kid. Okay well everything back to normal I guess.”

When it seemed like this was going to be his season four story, I was in that “grumpy and bored” place. But then we find out that he knew Alison before he ever met Aria or the others, that they may have been involved (gross, though at least then, she’d lied about her age), and that he might be A.

The evidence stacks up against him. He has a secret apartment in another town full of what has to be tens of thousands of dollars of surveillance equipment. He’s stalked the girls and their families. He’s working with Mona. When Spencer starts seeming to get suspicious, Fitz tells Aria that she’s addicted to ADHD meds. That turns out to be true, but it sure looked like something he was using as a convenient distraction and way to discredit her. He also starts isolating Aria more and more, taking her out to a cabin with no cell reception, away from her friends.

Add all of that up, and it really looked like he might be A. I was sure believing it!

And for a little while, I…kind of liked Fitz. Yes, he was making me look like a fool, and yes, he was still doing awful things, but Fitz as a secret supervillain who’s done a great job of acting like a mediocre trust fund boy in love with his student? There’s something interesting there.

I also find it more palatable than the truth – which is that Fitz actually does love Aria, and he still spied on her. He still spied on everyone who matters to her. He still lied about knowing her missing/maybe murdered best friend, blackmailed Mona (another teenager, and also one who had stalked Aria before!) into helping him, used Spencer’s addiction against her.

Fitz stole his underage girlfriend’s most vulnerable moments, put it in a book, and sold it to a publisher. He didn’t stop – had no intention of stopping – until he was caught. I don’t think Fitz is remotely sorry that he spent the last several years surveilling their every move. He’s sorry that he was discovered before the book could come out.

He did all of these things while believing that he loved Aria and they could have a relationship. He seems to think that love is stalking your partner, but it’s okay if they don’t know.

That’s so much worse to me than if he’d just been A and pretending to love her. He’s not A, the mysterious and super extra force behind the scenes. He’s just your average creepy, entitled, dangerous Tinder match.

In the end of season four, Fitz gets shot while trying to protect the girls. This is apparently supposed to be very noble and we’re supposed to be worried and forget everything else. It’s like the writers realized they’d set him up in a place where it was impossible for anyone who had been paying attention to forgive him, so they went to an extreme and tried to play on our emotions by having him risk death to save Aria.

I don’t know about you, but it didn’t work on me.

Sorry – this ended up being Serious, not just funny jabs at Fitz. But I’ve been making jabs at him for months now, and I needed to get serious. Pretty Little Liars has a really big and pervasive problem with older men and underage girls. It goes far beyond Fitz and Aria. It’s every interaction the girls have with an older man. 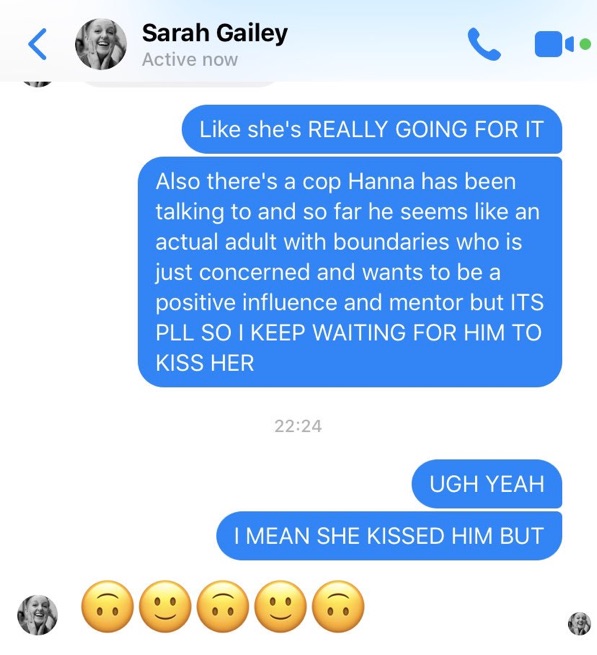 So there it is, the case against Ezra Fitz. The evidence is before you, dear readers of the jury. Let your heart decide.

P.S., if none of that was enough, just consider the fact that in the year of our lord 2014, he was communicating with his literary agent through snail mail. Who does that?

Sarah Hollowell is a fat Hoosier writer working to up the magic quotient of Indiana. She's been published on Huffington Post, Fireside Fiction, and Apex, among others. She spends most of her time binging podcasts and needle felting characters from Animal Crossing.
All Posts
PrevPreviousDiverse Book Corner: Top Vacation Reads!
NextThe Scent of a Novel by Heather Webb and Hazel GaynorNext