The Feel Good Rom Com You Need: An Excerpt from Very Sincerely Yours by Kerry Winfrey 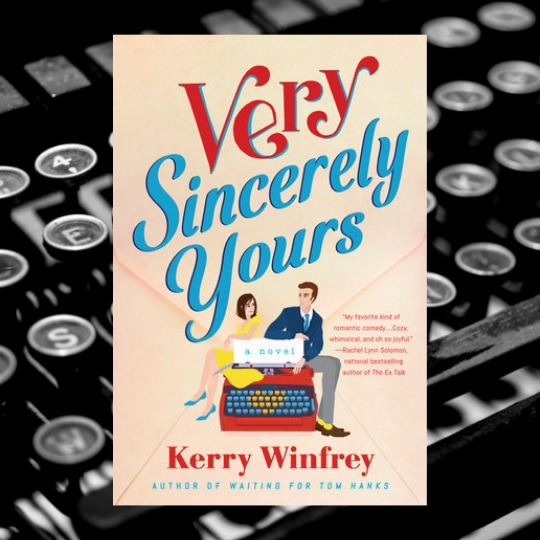 We are so excited to bring you this exclusive excerpt from Very Sincerely Yours by Kerry Winfrey! 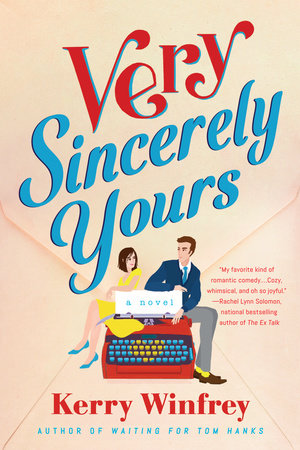 About Very Sincerely Yours:

Teddy Phillips never thought she would still be spending every day surrounded by toys at almost thirty years old. But working at a vintage toy store is pretty much all she has going on in her life after being unceremoniously dumped by her longtime boyfriend. The one joy that she has kept is her not-so-guilty pleasure: Everett’s Place, a local children’s show hosted by Everett St. James, a man whom Teddy finds very soothing . . . and, okay, cute.

Teddy finds the courage to write to him, feeling slightly like one of the children who write to him on his show. He always gives sound advice and seems like he has everything figured out—and he pretty much does: Everett has a great support system, wonderful friends, and his dream job. But there is still that persistent feeling in the back of his mind that something is missing.

When a woman named Theodora starts writing to Everett, he is drawn to her honesty and vulnerability. They continue writing to each other, all the while living their lives without meeting. When their worlds collide, however, they must both let go of their fears and figure out what they truly want—and if the future they want includes each other.

Teddy didn’t believe in guilty pleasures, as a concept. She figured if you liked something, whether it was the Taco Bell Crunchwrap Supreme or the music of boy bands from the late ‘90s (okay, so those were both examples from Teddy’s life), why feel guilty about it? The world was a tough, cruel place. Why not find joy wherever you could, grab that joy by the metaphorical joy-reins and hold on tight?

That being said, Teddy did feel, if not guilty, then definitely in the neighborhood of weird-ish about her love of Everett’s Place, despite the fact that the message board moms reassured her she wasn’t the only one. Given that she worked in a toy store, her obsession with puppet-based entertainment might give the impression that she was a perpetual child.

But there was something about Everett, the titular host and puppeteer, that soothed her. Something about his large, brown eyes and open, honest face that made her feel better about the world. Something about the way he managed to maintain a conversation with a puppet while responding to a heartfelt letter from a child, which seemed like it was an extremely specific version of the “get you a man who can do both” meme, tailor-made for Teddy.

Everett’s Place was largely about feelings, a favorite topic of both Teddy and preschoolers. Each week, Everett and his crew of puppet friends (an alligator, a raccoon, a sloth, and a llama wearing a particularly sassy hat) explored some predicament that allowed them the chance to examine anger, or jealousy, or love. And then at the end of every episode, Everett and one of the puppets read a letter from a viewer who’d written in with a question. Sometimes they were silly, like the time a boy wondered why he couldn’t pee outside like his dog did. And sometimes they were more serious, like the little girl who asked Everett where her grandpa went when he died (that one made Teddy cry, with Everett and his big brown eyes explaining that the girl’s Grandpa would always be alive in her memories).

As the theme song began, the bell above the door jingled, but Teddy didn’t bother to close her laptop. “Good morning,” she said, offering a wave.

The man grunted at her as he speed-walked to the back of the store, a magazine tucked under his arm. Several days a week, he came in to use the restroom, never speaking to Teddy. Technically, the restroom was for paying customers, and she should’ve demanded he at least buy a Ring Pop if he wanted to relieve himself on the premises.

But also…well, Teddy had a hard time turning people away when they had to perform a basic bodily function. There but for the grace of God go I, and all that. And so, since he always kept the restroom clean, she let him stomp past her without saying a word. She didn’t know what happened on her mornings off—did he come in? Did Josie or Carlos, the shop’s other employee, turn him away? Teddy didn’t know, but she enjoyed the slight mystery it added to her predictable days.

Teddy watched most of the episode without a single customer walking in. She barely noticed time passing until the restroom door flew open and the mysterious bathroom bandit stormed through the shop and out the door.

“Have a great day!” she called as the bell rang.

The episode was almost over, meaning it was time for Teddy’s favorite segment—Letters to Everett.  This week’s letter, as Everett read to the llama, was from a little boy named Keegan. Everett cleared his throat before he started reading and Teddy, she admitted, swooned a little bit. There was something about a man who looked like Everett taking a child’s feelings seriously. It did things to a lady.

All of my friends are good at something. Jayden is good at basketball. Sasha won the spelling bee. Marlon was on Chopped Jr. But I’m not good at anything. I’m okay at lots of things (soccer, math, drawing) but not great. How do I find my thing?

Teddy smiled at the formal send off, even as her heart twisted at the child’s words.

“Well, Keegan,” Everett said, looking straight into the camera (and straight into Teddy’s soul), “I bet you’re good at lots of things. For starters, this was a pretty good letter. Right, Larry?”
The llama nodded, and Teddy found herself forgetting, as she did every week, that the llama was controlled by a puppeteer’s hand and wasn’t acting independently.

“I bet you’re a good friend, and a good son, and a good student. I can tell that you’re kind and generous and helpful. But I know that’s not what you’re asking. You want to find your thing. Well, you might have already found your thing. It might be one of those things that you told me you’re just okay at. Maybe once you spend lots of time practicing soccer, math, or drawing, you might find that you really are great at them.

But maybe—and this is kinda cool to think about—your thing is out there, waiting for you. Maybe your thing is fencing, or singing, or playing the flute. But you won’t know unless you try, right? So that’s my advice for you, Keegan. Try everything you can. Even—or maybe especially—the things that scare you. Keep your mind and your heart open and be on the lookout, and I know you’ll find your thing.”

Teddy swallowed, hard. “How does he know?” she whispered to the case of original GI Joe figurines beside her.

Kerry Winfrey grew up in Bellville, Ohio, where she spent most of her time reading inappropriate books at the library. Not much has changed. Kerry writes for HelloGiggles and blogs at welcometoladyville.com. She lives in Columbus, Ohio with her husband, their son, and their dog, Merlin.