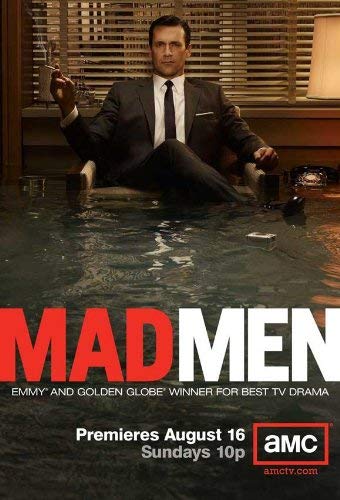 Before we kick off to fun discussions of one of the last decade’s most-adored shows, allow me a bit of an academic digression with this bit from a paper about Mad Men.

“The process of applying a melancholic framework to a media text like Mad Men involves identifying textual materials that deal with sexism as a culturally pervasive problem in the past and, by implication, the present… The relationship between the contextualized plots that take place in the 1960s and the problems of the present is made clear though multiple aspects of the text, including visual signifiers of modern-day sexism like the emphasis on women’s appearance, musical cues that link the 1960s to the present, and voiced critiques of sexism by characters within the show,”  (Phelps, 2013).

The above quote (Congrats if you bothered to look it over) came from my Master’s Project in Women’s and Gender Studies. At the culmination of my degree that made me the “Gender Master” I am today, I spent hours upon hours of my life researching, dissecting and defending the way Mad Men wrote about, meditated on and used the stories of women for a potentially politically progressive agenda.

First, a little background: academics and critics alike tend to see nostalgia of any kind as a toxic impulse. I used my paper to argue that Mad Men uses nostalgia to draw viewers in, but then engages them in something deeper that’s used for progressive purposes. The pretty veneer catches our interest. The ugly truth reminds us of society’s ills in the past and, most importantly, in the present.

There was a lot more to it, but in my eyes it seemed that the popularity of Mad Men signaled that people were willing to look at the problems of the past, analyze them, and recognize the way in which they mirrored contemporary sexism, racism, homophobia and so on. I argued that to look at a fictionalized past was to move toward a better future.

Three years after I finished my big paper, a national election rocked my world and made me want to throw all my lovingly crafted academic arguments about a nostalgia’s role in a better tomorrow out the window.

My whole country was thrown into rhetoric about returning to a collective “Again,” and I couldn’t stop feeling sick at the implication. The “Again” of our president’s famous slogan seemed to be a landscape I recognized from the hallways of Sterling Cooper Draper Price and the kitchen table of Betty Draper.

Ever since then, I’ve had a pretty difficult time returning to the show I loved so very much. I’d spent literally countless hours with these charming, difficult, interesting characters and their stories…but they now felt like strangers to me.

Now that we’re entering a new decade, though, I pondered about whether I could reconcile a bit with one of my former favorite shows. “What might one of my favorite shows from the last decade,” I wondered, “have to say to us as we enter the next one?”

So, after re-watching a smattering of episodes, I’ve been able to work toward a tenuous peace with the famous prestige drama. I found that some parts are still as difficult as I found them post-2016. Some parts, however are still worth appreciating and holding onto.

*Racial Issues: Mad Men has a reputation for weakness when it comes to racial representation. Much like a certain contingency of the romance community that claims historical stories just don’t have a place for racial representation (which, for the record, I hope we all know is FALSE), Mad Men didn’t have much imagination for how to incorporate racial diversity into its stories. Even in past seasons, when gains from the civil rights movement became part of the show’s story, its black characters felt peripheral and under-examined.

*Its Portrayal of Sexism: One of the greatest ideas I fought against in defending my Master’s project was that Mad Men was fundamentally created so we can enjoy the sexist things that are said in the 1960’s office environment. While I still believe that the show is on the side of its women, there are times that the shocking sexism displayed onscreen doesn’t serve the plot—it just reinforces the painful truths of the era that we as viewers are already familiar with.

*Mad Men Behaving Badly: I don’t have an exact answer for this, but every so often during my recent re-watch of Mad Men episodes, I’d stop and ask, “Are we served by stories like this? Of privileged men behaving badly and then feeling sad when their own bad decisions come back to get them?”…I don’t want to paint with a broad brush and say men’s emotional lives aren’t important, but it’s harder than ever to give energy to watching Don’s stumbling path to questionable redemption.

Love It: The Qualities That Keep Me Coming Back To Mad Men

*Its Portrayal of Sexism: I know, I know…I just listed this quality as a problem in the section above! But I still stand by some of the old academic arguments I’ve made—while the writing for some of the show’s more sexist lines seems a bit heavy-handed, there’s a special kind of catharsis that it may bring in the wake of #MeToo conversations. There’s a reason that the gif of Joan in an elevator with Peggy saying, “I want to burn this place to the ground,” is evergreen. The sexism in Mad Men is still compelling and revealing of our current struggles as a culture.

*The Humor: Though Mad Men has a reputation as a prestige drama, its dry humor still makes it incredibly watchable. From the reactions to Megan’s cringey performance of “Zou Bisou” to Pete Campbell tumbling down the stairs, there are plenty of ways humor provides a breath of fresh air in this series. Heck, my husband and I still regularly say Pete Campbell’s darkly comedic, “Not great, Bob!” to each other on at least a weekly basis. Honestly, I think Mad Men’s unique comedic sensibility paved the way for the tone of the current darling Privilege Dramedy of HBO’s Succession!

*Comfort During Chaos: The last time I truly sat down to engage with Mad Men was in December of 2016, when for some reason I was compelled to re-watch Season 6 (which is generally my least favorite). The season takes place during a year of great upheaval, with riots and assassinations leading characters to constantly wonder, “just what the hell is going on?!” Now, years later, I see that the threads of fear and humanity throughout a chaotic history make me feel at least a little better—not about the state of the world, but about the fact that people decades before me lived through frustratingly uncertain times and likely felt what I regularly feel, too.

Unlike most of the pieces I write for Frolic, I can’t wholeheartedly recommend that everyone should watch or re-visit Mad Men. Some of the problematic aspects may just be too painful or zap too much energy. In fact, I sometimes wonder if my willingness to go back to the series is based in my own misplaced nostalgia for a time in which my narrow feminism made it easier to watch the show without criticism.

Regardless, I do firmly believe that it’s an incredible piece of art from the last decade, with insights into uniquely American conflicts of society and self, and I am glad to have the stories from the ad agency refreshed in my brain as I head into the next decade.

Erin Phelps is a lover of swoony romance novels, superb television and movies, and splendid comedic podcasts! In addition to writing for Frolic, Erin works at a fun customer service-oriented job at a salon. Sometimes, she can even be found teaching Women’s and Gender Studies at her local college! Her love language is well-constructed pop culture references and her favorite treat is a caramel latte.
All Posts
PrevPreviousTurning My Nerdy Obsession into a Profession by Joanna Hathaway
NextBest Bookish Places in OxfordNext