The Heart of a Story: A Highlander Walks into a Bar by Laura Trentham

Most Highlander stories are historical romances set in Scotland. While there are tartans aplenty in this book, this is a modern-day story of Scottish Highlanders unfolding in America. 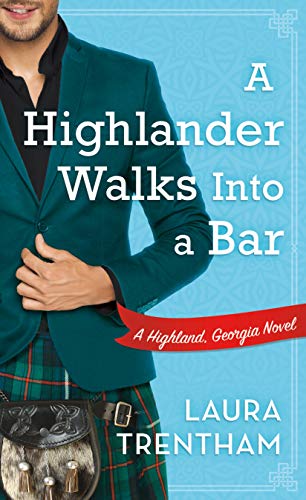 Isabel “Izzy” Buchanan and her mother, Rose, live on the estate of Stonehaven in Highland, Georgia located in the rolling green foothills of the Blue Ridge Mountains. The town of Highland is about everything Scottish, almost to the point of a fetish. Tourists find it cute and fun and flock to it regularly during the summer months. Isabel and Rose are in charge of organizing the huge Highlands Festival on their estate every summer, complete with bagpipes, caber tosses, and dancing. The townspeople derive a large part of their annual income from the festival, so Isabel feels that the burden of the welfare of the entire town rests on her shoulders.

Gareth Connors is the Earl of Cairndow, an estate in the Scottish Highlands. He and his nephew, Alasdair Blackmoor, are estranged since the death of Alasdair’s father, who was also Gareth’s brother. Before their estrangement, Alasdair had had a wonderful mentor in Gareth and his happiest memories are from his summers spent at Cairndow. Alasdair now works in London for an acquisition and redevelopment shark — he is superb at his job and has been focused on climbing the corporate ladder. His mother’s panic over Gareth being taken advantage of by a fast woman is what sends Alasdair to Highland to assess the situation and, if possible, spirit Gareth back to Cairndow.

Isabel’s mother, Rose, met Gareth in Edinburgh on a recent trip, and in the space of two weeks, the two of them developed a decided tendre for each other, so much so, that Rose brought Gareth back home to Stonehaven for a visit. They’ve been spending the ensuing days romancing each other.

Isabel is shocked to the core of her being and on suddenly shifting sands. On one hand, she does want her mother to be happy, on the other, Isabel still misses her father very much and her parents’ marriage had been a happy one for all intents and purposes. So why is her mother moving on? Isn’t she, Isabel, enough for her mother’s happiness? Why does Rose need a stranger?

This comes up again and again in Isabel’s thoughts and affects her behavior towards Rose and Gareth. She voices it to Rose once, at which point, Rose says that Isabel will understand when she grows up. This is such a mom thing to say to comfort a daughter, and it is also a bracing rejoinder to mature a bit. Her mother hopes that when Isabel falls in love with someone, she will realize how, when it happens, all things in life appear in soft focus as that person comes into sharp focus. Being smitten with Gareth doesn’t mean that Rose loves Isabel less — it’s just that at this moment in time, Gareth occupies more of Rose’s attention and thoughts.

Given that she still lives in the same town and in the same house and with her mother no less, Isabel has always played second fiddle to her glamorous mother. She is the gauche, awkward girl, whereas her mother is the epitome of the Southern woman. However, Rose’s selfishness now in letting Isabel handle most things to do with the festival and Stonehaven while she focuses on Gareth, allows Isabel to finally see her mother, not as an infallible person, but as someone with flaws and individuality. This allows Isabel to recognize that there is strength within herself, that she does not have to rely on her mother, that she can take charge of her life and things around her and succeed. Trentham does such a wonderful job with the unfurling of Isabel’s individuality and sense of self-worth.

Alasdair and Isabel’s relationship is charming. While steadily growing attraction simmers between them, what brings Alasdair and Isabel together is their love of nature. It is in their blood from running wild during their childhood through fields of wild flowers, among cool glens and forests, and getting wet and muddy from streams. Their carefree childhood is given free rein when they are together. This freedom is exactly what they need to look at their life anew. Are they happy? And if not, what is it they need to do to be so?

A Highlander Walks in a Bar is a fun, light-hearted story with two warm, tender romances and is a perfect beach read.

Keira Soleore writes for the International Examiner and Cogitations & Meditations. She enjoys connecting with readers on Twitter (@keirasoleore) and through her website (www.keirasoleore.com). Her interests include medieval manuscripts, philosophy, poetry, picture books, choir, sunshine and beaches. Keira is a pseudonym.
All Posts
PrevPreviousDaily Frolic: This Ice Cream Themed Eye Shadow is Adorable
NextMy Obsession with Whip-Smart, Sexy, Enormously Satisfying Rom-Coms By Jessica PetersonNext