The Heart of a Story: American Dreamer by Adrianna Herrera

Everyone needs a Nesto Vasquez in their life. Someone who’s there to welcome you home, comfort you with a hug just when you need it, and warm you up from the inside with beautifully-made food. And when that larger-than-life person comes with a willingness to be honest about their feelings and to openly share their life with you, you hold on fast to them and thank your lucky stars you have someone this good in your corner of the world. That is exactly what Jude Fuller does. 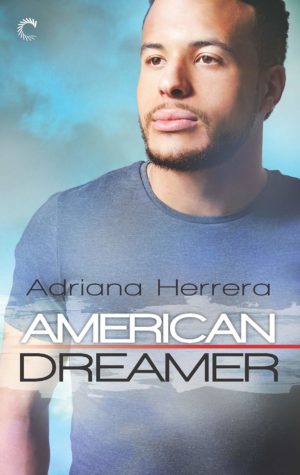 Nesto is a Dominican American chef who owns a Caribbean food truck in NYC. His teenage afternoons spent with a chef who was more father to him than his own missing one, have left Nesto with a hankering to make a  living feeding people with food handmade with love. So he chucks his office job goodbye and starts a food truck. When the story opens, Nesto has decided to try his hand at making a success in Ithaca, where his mother and sister live. He is plagued with doubts: Will Ithaca be ready for his type of food? From a food truck? Will he be able to find enough gigs to earn a comfortable living? Menacing him is a racist lady from the City Council who wants to run people of “his kind” and who’re competition for her son’s food truck out of town.

Jude is a youth services librarian in Ithaca. He works by day at the local library with his best friend, Carmen. By night, he retreats to the house he owns and which he has made into a haven with carefully chosen furnishings and art he’s collected from his travels. When the story opens, he is working on getting his mobile library project passed by the library board. Putting him through the grinder is the well-connected librarian grant writer who is putting up all kinds of hindrances to having his project passed by the board’s inspection.

Nesto’s mother and friends have always been so open and accepting of his being gay that he has never felt a moment of not being comfortable in his own skin. Jude, on the other hand, has had a terrible experience coming out to his family. Their shunning and hate have eviscerated his self-confidence in who he is. His long travel through Honduras had restored some sense of self to him, but he is still a bundle of insecurities when he meets Nesto.

Nesto’s larger-than-life presence is at first disquieting to Jude — he seems too good to be true. No one can be this friendly, this caring, he thinks. As the days go by, by slow degrees, Nesto grows on Jude. He cautiously starts trusting Nesto and believing in his good fortune for having met someone wonderful.

Herrera has done a wonderful job showing how different these two men are and yet how perfectly they fit together and how they’re there for each other in times of difficulty and in times of joy. Herrera’s sensitive portrayal of their strengths and anxieties and quirky personalities makes them easily relatable and understandable — I was invested in their story from the get go.

I loved Nesto’s largesse and generosity of his time and attention towards everyone around him. I loved seeing how under Jude’s influence, his contemplative nature comes to the foreground. I also loved seeing Jude coming out of his protective shell under Nesto’s regard. Seeing him finally make the decision to entrust his heart into Nesto’s safekeeping was such a triumph for Jude and the reader who’s been completely devoted to the story.

American Dreamer belongs on your keeper shelf. It’s a story well-worth investing your time in, because it’s what romance is all about.

Keira Soleore writes for the International Examiner and Cogitations & Meditations. She enjoys connecting with readers on Twitter (@keirasoleore) and through her website (www.keirasoleore.com). Her interests include medieval manuscripts, philosophy, poetry, picture books, choir, sunshine and beaches. Keira is a pseudonym.
All Posts
PrevPreviousHow to Live Your Best Hogwarts Life in Edinburgh, Scotland
NextDaily Frolic: Idris Elba has melted our hearts in this new comedy seriesNext