The Heart of a Story: Ayesha at Last by Uzma Jalaluddin

Ayesha at Last is a delight from the first word to the last. Rich with cultural texture, replete with social nuance, and brimming with humor, it is one of the best retellings of Austen’s Pride & Prejudice. 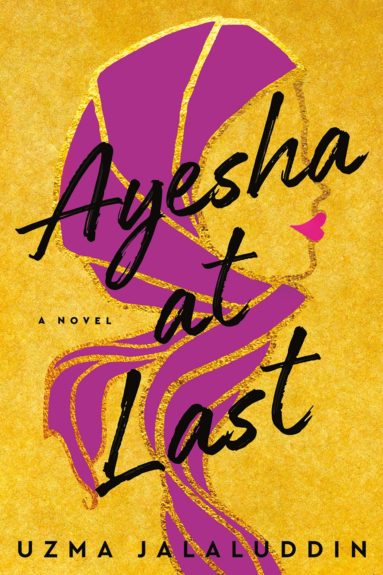 Khalid Mirza is a conservative Indian-Canadian Muslim man, who works as an IT specialist in Toronto. Religion is very important to him and he prays five times daily. He takes his conservative and religious values further by abstaining from drinking alcohol, refusing to shake hands with women or to look at them, wearing the prayer robe and skullcap as part of his normal clothes, even at work, not dating and certainly not sleeping with a woman who is not his wife. He is a virgin who is waiting for his mother to select his wife for him.

Ayesha Shamsi is an Indian-Canadian Muslim woman, who is a poet and a newly minted teacher working as a substitute in a Toronto high school. Strongly opinionated with a no-nonsense demeanor, she is aided and abetted in her behavior by her grandfather. While she wears a hijab, she conveys an image of a modern woman who does not approve of arranged rishta proposals, which she deems are outmoded mating rituals.

While outwardly in charge of their destinies and uncaring of other people’s criticism, inwardly, they question their life’s choices all the time and battle loneliness. It is one thing to charge onward on the path you’ve defined, but it is quite another to have to go it alone. It is not that they don’t have close family members who live with them and love them, but that they are a square peg in the family circles. A part of them — hidden from others and sometimes even obscured from themselves — longs for that someone who “gets” them.

Before they meet, neither is willing to compromise an iota of who they are and what they value. However, in a case of opposites coming together, attraction does spring up between them. A romance uniting the two means that not only do they have to balance the expectations of their immigrant parents, but they have to understand each other’s Muslim-ness, desi-ness (Indian), and Canadian-ness just as much as they have to understand each other’s values, personalities, pet peeves, and hobbies. While it is a long time coming, as they grow together, they discover what they treasure in the other and rediscover what they each cherish in themselves.

While staying true to the broad strokes of Pride & Prejudice, Jalaluddin has gone one step further than Austen by introducing religion into the maelstrom of Indian-Canadian cultural norms and societal mores. This adds a complexity to the novel that Austen sidestepped. Not only do Khalid and Ayesha both feel like they’re part of both worlds — India and Canada — yet part of neither, they feel the same about Islam. How Muslim are they? Jalaluddin allows them to guide their natural impulses and struggle with their human feelings and align them with what the holy Qur’an ascribes as being a good person.

Some authors reveal character through that character’s internal monologue. However, Jalaluddin skillfully develops her people through their interactions with other people. Thus, instead of an info-dump for that character, you get a gradual trickling in of details and a building up of a whole picture, pixel by pixel. This intricate image is constructed by every action and every dialogue informing on the character. Jalaluddin accomplishes this for every character by navigating the difficulties with dexterity and skill. This is where her writing style is closest to Austen’s.

For fans of Pride & Prejudice, this novel is a must-read.

Keira Soleore writes for the International Examiner and Cogitations & Meditations. She enjoys connecting with readers on Twitter (@keirasoleore) and through her website (www.keirasoleore.com). Her interests include medieval manuscripts, philosophy, poetry, picture books, choir, sunshine and beaches. Keira is a pseudonym.
All Posts
PrevPreviousComics and Chatter: Let’s Talk About July Releases
Next#TBT Recs: National Day of the CowboyNext