The Heart of a Story: Crashing into Her by Mia Sosa

Biting humor really works in catching my attention. Pair that with sharp characterization and sharper dialogue, and I am hooked. Crashing Into Her by Mia Sosa has it all in spades. 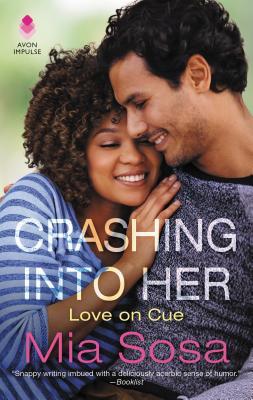 Anthony Castillo is a Hollywood stunt professional for TV and film and an instructor at a stunt training company. He lives at home with his father and is hoping to buy a home, but his non-steady income makes it difficult for him to get a mortgage. He is adamantly, uncompromisingly determined that he wants to remain relationship-free.

Eva Montgomery is a fitness instructor. She lives in the shadow of her father’s concern — a concern that can be as smothering as it is manipulative. After a scumbag of a boyfriend tried to force her to marry him by attempting to impregnate her, she is single-mindedly resolute in avoiding future serious entanglements.

Eva’s best friend, Tori, is Anthony’s first cousin. Eva and Anthony meet at Tori’s wedding and the attraction is definitely on, but the sparks really fly when they meet over being bumped off full flights leading to a hookup. Despite it being spectacular, both vow that this is a one-night-only deal and choose to move on with their lives.

Fast forward three months and Eva gives in to Tori’s urging to move across the country to Los Angeles and join Tori’s gym as a fitness instructor of Zumba. And as luck would have it, Anthony is a fitness instructor of self-defense at the same gym. Now suddenly their one-night-only deal becomes the one night they cannot banish from their minds. It’s right there in front of their noses every time they see each other.

When Eva finds out about how much stunt doubles get paid in Hollywood, she is convinced that being a part time stunt person on movie sets would be a good way for her to capitalize on her physical fitness potential to ensure a supplemental income. Unfortunately, Anthony is the one making decisions about who to admit to the best stunt school in the city.

And Anthony is adamantly opposed to Eva doing stunt training. He thinks she’s a dilettante and not thinking of doing it as a career. He knows it is dangerous work. He also doesn’t want to be in her proximity, for every charged encounter with her leads to him thinking of her constantly afterwards. Neither is Eva enthused to be taking instruction from Anthony. But she needs the income and thinks that stunt work is her best option. He is constantly at the forefront of her mind, and that makes her wary.

Unfortunately for them, sparks do fly every time they are in the same room. They cannot keep their eyes off each other — they make each other’s hearts soar. They also cannot avoid goading the other into more and more indiscreet and outrageous conversational gambits. They are doppelgängers of each other, tinder to the fire between them.

Both are convinced that: In every relationship, you run the risk of either being hurt or doing the hurting. No relationship can achieve that perfect balance, that point when two halves love each other equally. This is what they grew up with in their families and this is their outlook.

How these two wounded souls cut through the tough shell of sarcasm and bruising wit to be willing to reveal their vulnerabilities and sensitivities — those places inside them that are still tender and haven’t scabbed over — is a testament to Sosa’s writing chops. She develops their characters over the course of the story such that by the end of the book they still retain their chutzpah while also layering in tenderness. That intoxicating combination of love and sass works like magic on their confidence as individuals and confidence as a couple. Despite their history, they become convinced of the rightness of their being together.

What can be more romantic for a stuntman to say than “I am so glad you crashed into my life. The biggest fall of my life is falling in love with you”?

Keira Soleore writes for the International Examiner and Cogitations & Meditations. She enjoys connecting with readers on Twitter (@keirasoleore) and through her website (www.keirasoleore.com). Her interests include medieval manuscripts, philosophy, poetry, picture books, choir, sunshine and beaches. Keira is a pseudonym.
All Posts
PrevPreviousFor the Love of Lists: My Life is a Real Life Listacle
NextDaily Frolic: You gotta buy this typewriter!Next