The Heart of a Story: Kiss and Cry

Kiss and Cry by Mina V. Esguerra is all about kilig (Tagalog), that sense of romantic excitement in a love story. Even as the characters in the story feel it from their first kiss through all their tender moments together, the reader feels it watching them. That ability of the author to not only show her characters feel this emotion but to make the reader feel that emotion as well makes an ordinary story extraordinary. 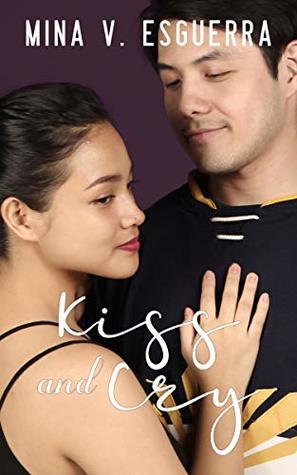 Calinda “Cal” Valerio is a figure skating superstar in the Philippines, having won numerous gold medals in various competitions. From a very young age, she has been hyper focused on the ice. And her parents made sure she stayed focused by not allowing her to date — not seriously, not casually. Now Cal is retired and no longer competes; instead, she choreographs routines for other figure skaters and puts on shows and performances. She also courts donors to help fund skaters who cannot otherwise afford to pay for this expensive sport.

Filipino-American Ramirez “Ram” Diaz-Tan is an award-wining star of the Philippine national hockey team. Living part of the year in Houston, where he is an English teacher, and part of the year training and playing in Manila, Ram leads a busy life moving seamlessly between his two worlds. Using his time and money, he has also helped other kids take up the sport. However, money has always been tight for him, and he is tired of not being able to hold down a steady job, since hockey has always come first for him. So he is retiring from playing the sport.

Cal and Ram used to be great friends when they met ten years ago. But when rumors of their friendship reached her parents’ ears, they were adamant that she stop seeing him, and Cal and Ram’s relationship died aborning. Over the years, they have kept abreast of each other’s careers, because after all, the world of winter sports in a country with no winter was a small world. Now, ten years later, they meet on the set of a video shoot of thirty most accomplished people in their thirties.

And they realize that their attraction for each other has simmered unawares these fallow years. With maturity and independence on their side now, they embark on a no-holds-barred relationship for the three weeks Ram has left in Manila before he returns to Houston. I enjoyed seeing them discover how they each have changed and yet not changed. The things that were attractive about the other have remained the same, yet they are clearly now different people from ten years ago.

Cal suggests they each come up with a list of things they want to do with the other. I loved that they had things on there from the sweet to the sexual — a great way for them to lay their expectations on the table before each other, so no one is blindsided by unwritten expectations. For the first time in their lives, they find they’re officially dating someone. Their kilig over it, especially hers, is very sweet.

It was good to see the clear-sighted maturity both of them bring to their sport and to life — when it is right to push the boundaries to advance and when it is time to pull back and shift gears. Life is all about reexamining assumptions and goals and deciding on the best path forward. The sport will always be with them, but a failing career marked by injury is not how they want to run their life, so they both decide to retire at the height of their sporting careers.

I loved the little details in the book to which Esguerra pays such keen attention. As all immigrants know, when you move countries, you miss the foods and smells and sights of home and try to recreate in part what you cannot bring with you in whole. Trips home always involve bringing empty luggage to be filled up to take back with you. I was pleased to see Ram doing this for his mother every time he visits Manila. Such a small thing, but it speaks volumes of the type of person he is and how much he cares about the people he loves.

Relationships play a big part in this story, and I was especially pleased to see how Ram and Cal are with their relatives. The camaraderie and solidarity that Cal has with her brother. The respectful way in which Ram lives with his Tito (uncle) and Tita (aunt), and how he is ever mindful and appreciative of their kindness to him. The way Cal wants to let bygones be bygones with her parents by bringing Ram to their home for Sunday dinner and having them seeing what a sweet relationship she now has with Ram.

Esguerra’s talent for bringing Manila alive for the reader is superb. It’s again the little details that make it memorable — the sights and sounds of this busy city, the food, the places — the make-believe all blends seamlessly into reality.

I loved this quiet story Esguerra has laid out from Cal and Ram’s meeting on the set of the video shoot to the ball held by the same organization. The deep affection between them interleaved with frissons of attraction is a tale as sexy as it is tender. Esguerra’s writing is sure and understated and she allows her characters to tell their story — there is no authorial shepherding. I highly recommend this book.

An aside: I enjoyed Googling the Tagalog words and phrases Esguerra has sprinkled in her book. They add so much richness to the story and characterization. There’s one way to read the story by skipping over the words and then there’s another by knowing their approximate meanings. I urge you to look up the words.

Keira Soleore writes for the International Examiner and Cogitations & Meditations. She enjoys connecting with readers on Twitter (@keirasoleore) and through her website (www.keirasoleore.com). Her interests include medieval manuscripts, philosophy, poetry, picture books, choir, sunshine and beaches. Keira is a pseudonym.
All Posts
PrevPreviousContemporarily Ever After: Top Picks for the Week of March 10th
Next10 Ideas to Boost Your Bookstagram AccountNext