The Heart of a Story: The Austen Playbook by Lucy Parker

I have loved all three previous books in the London Celebrities series, so The Austen Playbook was easily one of my most anticipated reads of 2019. And it has fulfilled all its promise. Lucy Parker truly knows how to wring every emotion out of you, from tears of empathy to tears-in-the-eyes laughter. Her razor-sharp dialogue and witty observations will leave you riveted and enjoying every moment of it. 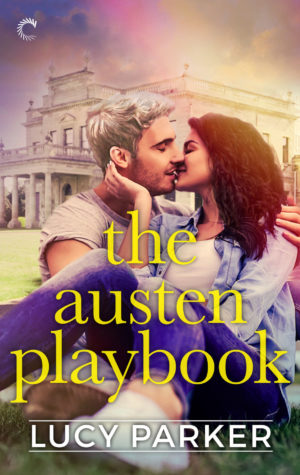 A bubbly, sassy, perennially optimistic actor is paired with a dour, curt, glacial theater critic — how delicious is this premise? And Parker spins this into an edge-of-the-seat, rollicking tale with drama, intrigue, and a soft, tender romance.

A soft, tender romance with someone whose scathing review calls her an “overexposed, chronically confused crowd-pleaser who’s built a career riding on her family coattails”? Yes, indeed. He has hidden depths of loyalty and empathy and affection, which she has to drill down to discover, and to the reader’s enjoyment, she does it with insouciance, self-possession, and protective concern for him. These two really fancy each other, and Parker proceeds to convert the reader’s “no way” to their relationship to “of course.”

Frederica “Freddy” Carlton is a seasoned actor who loves musicals and effervescent plays that bring joy to her audiences. But her father has dragooned her into high-brow dramas that will presumably bring her fame just like his mother, Britain’s famous actor and playwright. Freddy is miserable but cannot deny her father to whom she feels she owes her life — in an act of parental love, he had saved her young life while sacrificing his up-and-coming acting career to pain. She also feels a suffocating mandate to uphold four hundred years of Carlton history in London Theater.

J. Ford-Griffin “Griff” is the terror of the theatrical world with his acerbic pen and perceptive, knowledgeable remarks. That he can often be tactless is for the actor to labor under; Griff’s star is only in ascendance. He is used to command and control, not only in his professional world, but also in his life at home. He is always called in to rescue his brother and parents from one hapless scheme after another that they’ve managed to embroil themselves in — and also to rescue their country estate from financial ruin.

Freddy and Griff couldn’t be more dissimilar — in personality, outlook and prospects. And yet, to their utter disbelief, they are drawn to each other. He doesn’t need another impulsive person he has to rescue and she doesn’t need another control freak. But fate always has a chuckle tucked up its sleeve.

Working together to unravel the mystery of her grandmother and his father’s relationship, forces them into proximity with each other and having to collaborate on thoughts and ideas. It is always interesting how perceptions of a person change when we are forced to look at them from a different angle. Having to work and compromise with a person gives you an “in” to the person that you would normally never have from afar. I was fascinated as Parker showed how Griff’s and Freddy’s cognizance of each other’s strengths and weaknesses adds to their preoccupation with each other. Adding emotions to this mix unleashes a maelstrom of drama between them.

Having spoken with a couple of contemporary West End Theater enthusiasts, I am convinced Parker really “gets” the London theatrical world. And she casually drops the reader into it without fanfare or forced “Here Be Worldbuilding.” The practicality of it and the ethos of it build organically from her knowledge and is an immersive experience for the reader.

I have been on this journey with Parker from her very first Act Like It, and year after year, she has proceeded to fascinate me with her stories, distinctive voice, and deft observations rendered in precise language. Now I cannot imagine a year of reading without a Parker novel to anchor it.

(Here is an excerpt from the book.)

Keira Soleore writes for the International Examiner and Cogitations & Meditations. She enjoys connecting with readers on Twitter (@keirasoleore) and through her website (www.keirasoleore.com). Her interests include medieval manuscripts, philosophy, poetry, picture books, choir, sunshine and beaches. Keira is a pseudonym.
All Posts
PrevPreviousThe Most Anticipated Beach Reads of Summer
NextCo-Author Crossfire with Samanthe Beck and Robin Bielman, Authors of ‘Promise Me’Next