The Little Toe Ring: A Love Journey Through Jewelry by Lisa Straussberg 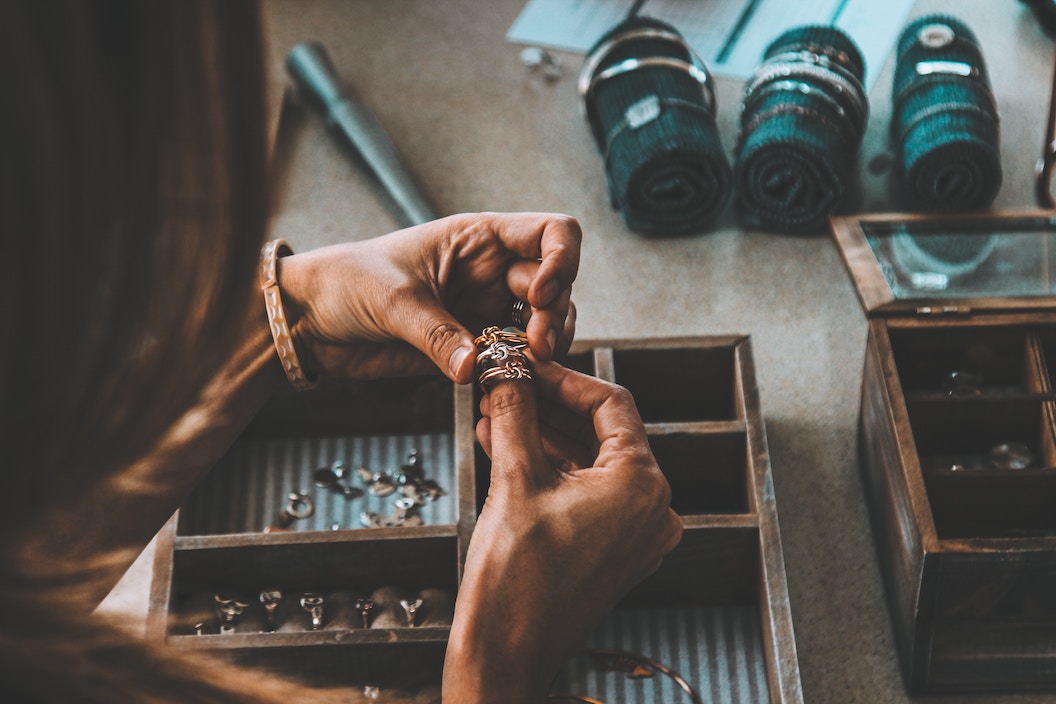 [Note from Frolic: We are so excited to have  Lisa Straussberg guest post on the site today. Take it away, Lisa!]

This is a story about a little toe ring– actually 3– representing a single symbolic thread throughout the course of my life thus far.

I was 16 years old perusing the jewelry stands at my local flea market. At that age, which teen doesn’t bedazzle herself with accessories or seek unique pieces to set her apart, while trying to fit in? Not long before, I declared acting as my passion, and opted to pursue it indefinitely. I also decided I preferred silver, and silver would be my aesthetic. So when I came across a silver toe ring designed with the comedy and tragedy theater facemasks, it was kismet.

Once the ring dressed my 2nd left toe– because I’m a lefty– we were inseparable. I never took it off. Milestones came and went. It became much like a tattoo; a reminder of what I had been after: my awe inspiring hiking voyage in Israel, my entire college career from Queens College to the prestigious NYU, the first film I made, the first boyfriend I had, 4 European backpacking trips, a stint as a US Adventure Tour Leader, the big move to LA, the hard road of auditioning, the first film I starred in, and years after that. I could look down at my feet, and those drama masks would look right back at me. In a way, the toe ring made me feel like me, and it was a constant I relied on. A photographer once took a close-up black and white photo of it while we were supposed to be shooting my headshots. It was that endearing.

When I met my new boyfriend barely into my 30’s, acting and auditioning was still an active pursuit. Feverishly I tried to push my career forward desperately hoping for a break I could celebrate. But I found my tolerance for striving followed by rejection, wavering. My heart began leaning instead towards the relationship that was blossoming, with someone who seemed to accept me unapologetically, ring toe and all. It definitely felt more validating at the time.

This is why the first heartbreak could have been meaningless on the outset, but when my trusty face masks broke apart in the shower, perhaps from all those years of wear and tear, I gasped on the inside and became mildly distraught on the outside. My partner must have thought I was nuts because it felt like a bad omen. The universe was trying to tell me something, and my best guess was rather discouraging; “It means you didn’t try enough. You won’t fulfill your dreams after all. You gave up on acting.”

It was a blip in my current events I just tried to come to terms with. The romantic love I was experiencing anyway seemed to far outweigh any misgivings I had about my future. Months went on. My toes were naked. One day, strolling on the Venice Beach Boardwalk, my boyfriend motioned me over to look at the toe rings on display. How thoughtful was he, to pay attention and find a new ring to replace my broken one. My eye was drawn to a silver piece encased with elephants. Before our courtship, I backpacked Thailand and gushed about the adorable elephants. It reminded me of a close cousin in Israel who also traveled to Eastern Asia and fancied anything elephant-themed. It felt like a good choice.

I wore my new toe ring with renewed confidence. Maybe this is more me. Maybe I’m a traveler, a free spirit, a lover of the exotic, and that’s who I really am. And I’m in love, and I found a man who loves me for being me. That’s all I really could ask for, right?

The elephants toe ring outlasted the relationship. It stayed with me during the next painful phase, and accompanied a move to my first solo apartment– the silver lining I should say. It was another milestone I wanted to accomplish– live roommate free– and finally I allowed it to happen. During this deep introspective period, now following a spiritual path, the elephants broke in half. What could this mean now? Maybe it had been time to move on. Maybe the universe was trying to tell me all the techniques I learned for taking care of myself, forgiving myself, and honoring myself had finally taken hold. So I did move on– from silver– and decided rose gold would be my new aesthetic. And what do you know, I found the perfect toe ring; a rose gold, lotus flower.

A native New Yorker, Lisa Straussberg holds a film degree from NYU and wrote, directed, and edited the award winning short “Queen of Heaven” before moving to LA to continue her pursuits in acting and entertainment. She is a freelance Script Supervisor, Associate Producer, Sometimes Actor with added passions in writing and travel. Her affinity for adventure lead to backpacking Europe four times, circumnavigating the Middle East, celebrating New Year’s in Brasil, festival hopping in Thailand and spending a summer leading camping tours across North America. Writing is her constant companion and she’s excited to share more of it to the world.

Where Romance and Pop Culture Live Happily Ever After.
All Posts
PrevPreviousAbdi Nazemian: This is the Story I’ve Been Wanting to Tell Since I Started Writing
NextLove YA: Top 3 Y.A. Reads for the Week of August 20th!Next