The Magic of Watching Magic Mike XXL With My Mom 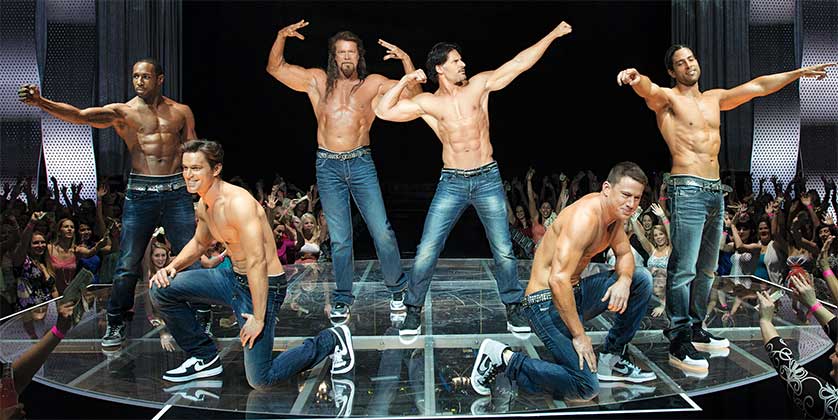 So, Mom, what is it that you expect from this movie we’re going to watch?”

“Well, I know to expect attractive men doing some dancing. I don’t know if they stay in one place or travel around. I’ve heard that this one has more going for it than the first one. More plot, maybe. And there will probably be some sexy parts. Oh! And isn’t Michael Strahan in it?”

“Yes. But he…doesn’t have a speaking part.”

Thus began my movie night experience with my mom. We were going to watch one of my favorites, Magic Mike XXL, and I was ready to follow her reactions.

If you’ve been reading Frolic for a while, you may remember the awesome piece by romance author Alisha Rai that argues that Magic Mike XXL is a feminist masterpiece. I’m absolutely in agreement with her on that: it’s a great model for rejecting toxic masculinity, embracing feminine pleasure, pursuing your passion, and injecting some silliness into our American sexual consciousness.

It’s one thing to spread the Gospel of the Kings of Tampa to like-minded fourth wave feminists and romance readers. It’s another thing entirely to take the plunge and watch this movie with your own mom. But that’s exactly what I set out to do. It’s what Channing Tatum and Andie McDowell would want me to do to honor their efforts, right?

Lucky for me, I have an awesome mom who was happy to take part in this whim of mine. A play-by-play of the movie would be boring, so here are a few takeaways from our mother-daughter male entertainer experience.

Before we started the movie, I asked my mom to think while she watched about which of the guys was her favorite. This was partly so I wouldn’t catch her off guard when I asked her later, but also because I personally think Magic Mike XXL has a lot to say about embracing your personal fantasies, desires, and interests. It’s no fun if you’re not mentally participating at least a little bit, right?

By the early scene on the beach, we already had a frontrunner: Ken, the reiki-healing, mysticism-believing aspiring actor. As Ken and Mike had a conversation about their careers and ambitions, Mom looked over at me and said, “Oh, I just love Matt Bomer!”

I need to give credit where credit is due: my husband handily predicted that Ken would be my mom’s favorite. I thought she might be more of a fan of “Big Dick Richie,” portrayed by the hunky Joe Manganiello.

“Oh, do you think it’s because he’s one of the more sexually conservative of the acts in the final showcase?” I asked.

“No,” my husband responded, “I just remember she really likes that USA show White Collar.”

At the movie’s conclusion, I turned to Mom and asked her which guy had most won her heart, and she confirmed: it’s Ken! But her appreciation for him comes from more than the fun tv show affiliation.

“I thought I would like Joe Manganiello’s character the most, because he’s so—“ here, Mom struggled to find a word to describe the Manganiello magnificence.

“But,” she continued, “there wasn’t as much to his character. Sometimes he came off as cocky. Matt Bomer’s character was nicer, had a little more backstory, AND was fun to watch!” We also concluded that Matt Bomer’s stage persona is much less intimidating than Mangianello’s Big Dick Richie.

That’s fine, Mom! More Manganiello for me, I guess.

At the end of the sequence at Domina, Rome’s subscriber-based club for women to enjoy beholding beautiful male entertainers, my mom said something that made me pause the movie.

I think she was afraid I was going to get into an argument or call her on her opinions, but I really just paused the movie so I could understand what she meant before I got to writing.

“How so? Who would you say is being objectified?” I asked, trying not to lead her answer but just let her share (even though I was having BIG FEELINGS about what she might mean).

Her answer surprised me, but then made me instantly more grateful for this weird, sexy little movie.

What followed was a brief, but fascinating conversation, in which Mom and I worked out together that the women were acting very sexually, but they were the patrons at the club. If anything, the men were being objectified.

Without putting words in my Mom’s mouth, this is what I think was going on as we both made meaning from that sequence. In our culture, any show of female sexuality is often tied to a history of also treating those women as sex objects.

There are so few examples of women-centered sexual pleasure narratives in our culture that it took some time to process that the women who pay to go to Rome’s club are happy to be there. They are the ones in control. They are the ones who are worshipped and served and treated as important. They are not disposable the way so many women in media are.

And let’s get one thing straight: “equal opportunity objectification” is NOT the logical or meaningful endpoint of this feminist discourse. Veering away from male-gaze-driven media tools IS the meaningful endpoint. Movies like Magic Mike XXL are just the stepping stones to a more diverse, equitable sexual narrative for people in our media.

“There’s No Judgment In This Movie”

The above quote comes from Mom as we were debriefing about the film. This is one of the major things she picked up on. As we expanded on the idea, I realized how right she is.

There’s no judgment for the women who go to establishments like Domina or spend their time and money at the stripper convention in Myrtle Beach. Furthermore, a wide variety of body sizes and women of different races are depicted at these events and NO ONE is made to look like a joke for wanting to get her needs met. Nor is there any judgment passed on to the affluent middle-aged women who are sipping wine and swapping stories about good and bad husbands with the traveling group of male entertainers.

There’s no judgment for the men’s dreams. Mike’s furniture business is already perceived as a legitimate pursuit. Tito’s artisanal frozen yogurt and Tarzan’s love of art are also treated as important passions. And there’s no judgment in the actual act of stripping and dancing for crowds of women.

My mom didn’t exactly see this movie as the feminist masterpiece that Alisha Rai and I think it is. She did see that it was fun, filled with gorgeous men, and sexually liberated in a way that confronted and surprised her.

So, maybe you’re like my mom, and you’ve never seen a movie like this. Maybe you’re like us, and have never been to a strip club, so you fail to see the appeal. But if you’re in need of some male-gaze dismantling fun, I can’t recommend watching this movie highly enough. You’ll get no judgment, that’s for sure.

Erin Phelps is a lover of swoony romance novels, superb television and movies, and splendid comedic podcasts! In addition to writing for Frolic, Erin works at a fun customer service-oriented job at a salon. Sometimes, she can even be found teaching Women’s and Gender Studies at her local college! Her love language is well-constructed pop culture references and her favorite treat is a caramel latte.
All Posts
PrevPreviousI Read a Romance that Reflected My Son’s Condition and Here is Why It Was So Important
NextModern Love Poems: 5 Poems to Keep Close for Rough DaysNext