The Need for New Retellings by MarcyKate Connolly 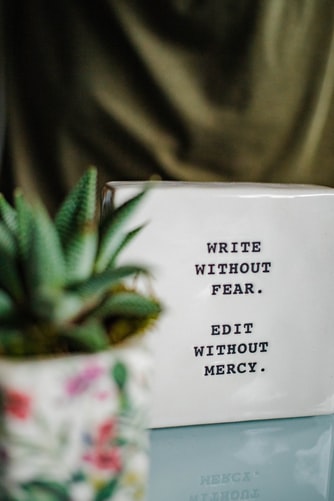 [Note from Frolic: We’re so excited to have author MarcyKate Connolly guest posting on the stie today. She’s talking all things retellings. Take it away, MarcyKate!]

It’s an old adage for writers that there are only so many plots in the world. The number can vary anywhere from 6 all the way to 36. As humans, we’re drawn toward stories that strike a chord in us, and I’d be willing to bet that if we gave it some thought, each of us probably has a favorite plot archetype (as for me, I love a good quest!). That’s what I love most about retellings of classic stories and why I believe they resonate so well—there’s the hint of the familiar, but with the new unknown elements to surprise.

There is another thing that many of the books in the classical canon also have in common: they’re outdated. But as writers we have the opportunity to put our own stamp on those stories and modernize them. It’s a big part of what makes writing them so appealing (and fun!).

My brother was an English literature major. He’s about ten years older than me so when I was growing up, I was that bratty little sister who’d go into his room and steal his books off his shelves to read them on the sly. Because of this, I first began reading Shakespeare, Poe, Dickens, and more when I was in elementary school. While a lot of what was going on in those stories went way over my head at the time, they still resonated with me and have influenced my writing and reading habits my whole life.

I credit this foundation with leading me to writing retellings as well as stories that are inspired by a particular source material, but don’t necessarily follow the plot as closely. My latest book, Twin Daggers, is my first young adult novel and a fantasy spin on Shakespeare’s Romeo + Juliet, if Juliet and her twin sister were magic wielding spies set in a world of magic versus machines. I adored Shakespeare’s play in high school—I do love me some angsty teens!—but was always bothered by how the characters, especially Juliet, had seemingly few real choices due to Fate, with a capital F.

My retelling uses the basic plot points of the original as guideposts, but set in a very different world and with a “Romeo” and “Juliet” who are much more in control of their own fates. I wanted to put a more feminist spin on the story, putting the Juliet character (her name is Aissa in my tale) in the spotlight and giving her the power to drive the story forward and the agency she lacked for me in the original.

She’s also literally very powerful. In the world of Twin Daggers, the faction of magic users, called the Magi, are only able to use their magic on organic matter. But Aissa and her twin can use their magic on everything, including the machines that their enemies, the Technocrats, build. She’s also confident, which in a male main character would likely be seen as normal. But in a girl, some might see that as arrogant. But I disagree—there is nothing at all wrong with a girl who knows her own worth and capabilities. And it’s frustrating to see society change their tune for the very same actions purely based on a character’s gender. Turns out, it’s rather fun to write someone who just wants to burn down all the norms and rebuild.

But most importantly, I wanted my main character to have the capacity to effect change within her world without becoming a sacrifice on the altar of a moral lesson, like Juliet does in the original. Aissa is a spy in a network placed in the Technocrats’ main city. She has a mission that she and her sister work together to achieve. Once she meets the Romeo character, he up-ends many of her plans, causing her to question everything she’s always assumed to be true. She falls in love, which she never intended to do, and the themes from Romeo + Juliet about how brutal love can be are woven in throughout. But that love is what finally sparks change in my heroine and sets her on a path to transform herself and her world, but not according to the Magi or the Technocrats’ designs. And since this is the start of a duology, she doesn’t have to die by the end of the first book in order to do it (no guarantees about the second :P).

As a reader, I love retellings because I can dive into a new world and look for the little clues to the original story—it’s like hunting for Easter eggs. As a writer, I think retellings are a delightful way to modernize beloved stories and make them your own, by challenging and twisting those well-known archetypes and themes. 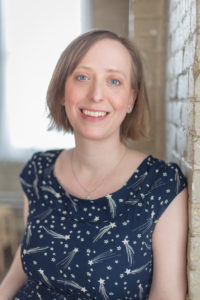 MarcyKate Connolly is a New York Times Bestselling children’s book author and nonprofit marketing professional living in New England with her family and a grumble of pugs. She can be lured out from her writing cave with the promise of caffeine and new books. Twin Daggers is her debut young adult novel, and she’s also the author of several middle grade fantasy novels including Monstrous and Ravenous, and the Shadow Weaver series. You can visit her online at www.marcykate.com. 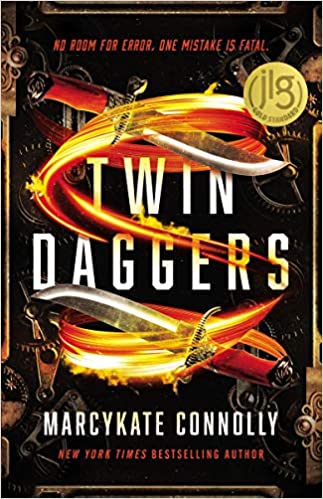 Aissa’s life is a web of carefully constructed lies. She and her twin sister, Zandria, are Magi spies, a magical people most believe to be extinct. And they’re on a mission for revenge.

This action and adventure spy thriller—a fantasy spin on “Romeo and Juliet” from New York Times bestselling author MarcyKate Connolly—is perfect for fans of Marissa Meyer and Elly Blake and is about to become your new obsession!

By day, Aissa and Zandra play the role of normal young Technocrats eager to fulfill the duties of their new apprenticeships. By night, they plot their revenge to retake their city from the Technocrats. But then Aissa is given a new mission: find and kidnap the heir to the Technocrat throne, who is rumored to be one of the Heartless—a person born without a working heart who survives via a mechanical replacement—and has been hidden since birth.

Aissa is more likely to be caught than to be successful, but she’s never been one to turn down an assignment, even if the hunt is complicated by a kind Technocrat researcher who is determined to find a cure for the Heartless. But when Zandria is captured by the Technocrats, Aissa will do anything to get her sister back. Even if it means abandoning all other loyalties and missions … and risking everything by trusting her sworn enemies.

Where Romance and Pop Culture Live Happily Ever After.
All Posts
PrevPrevious5 Must-Read Short Stories by Women
NextModern Love Poetry: I Have Visited Here Everyday by Shrutee ChoudharyNext