The Sweeping Romance You Need: The One You’re With by Lauren K. Denton Excerpt 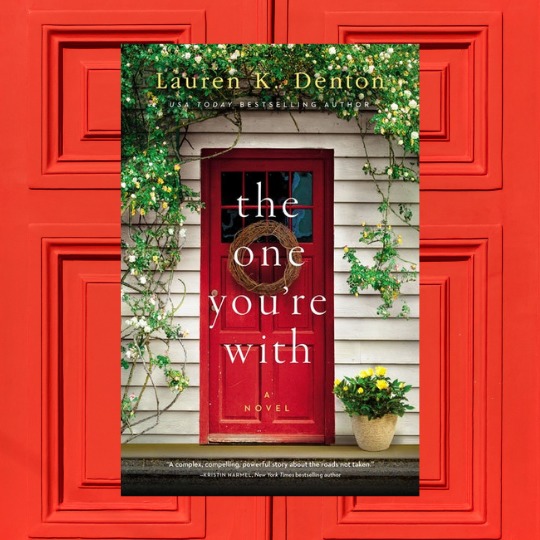 We are so excited to bring you this exclusive excerpt from The One You’re With by Lauren K. Denton! 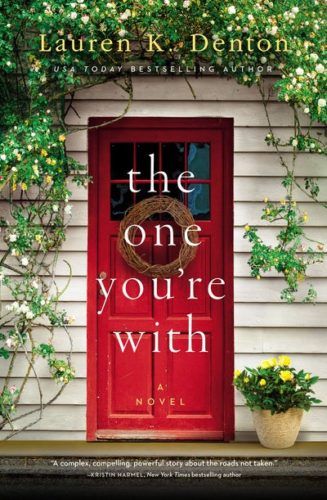 About The One You’re With:

High-school sweethearts Mac and Edie Swan lead a seemingly picture-perfect life in the sleepy-sweet community of Spring Hill, near Mobile, Alabama. Edie is a respected interior designer, Mac is a beloved pediatrician, and they have a historic home on tree-lined Linden Avenue, two great kids, and an orange cat named Ramona. From the outside, the Swan family is the definition of “the good life.” And life is good–mostly. Until a young woman walks into Mac’s office one day. A young woman whose very existence threatens all Mac and Edie have built and all they think they know about each other.

Nineteen years after a summer apart, with a family and established lives and careers, the past that Mac and Edie thought they left behind has come back to greet them. For the first time, constants in their lives are called into question: their roles as parents, their reputation as upstanding members of the community, and the very foundations of their marriage. As they wade through the upheaval in both their family and professional lives, they must each examine choices they made long ago and chart a new course for their future.

Mac heard the deep voice but was sure it wasn’t directed at him. He’d been at Sunset Marina less than three minutes. Only enough time to park his truck and make his way to the dock, where the woman on the phone had said she’d meet him on his first day of work. No one even knew who he was, much less that he was the marina’s newest summer employee. At least he was supposed to be a new employee, if he could just find his way to the woman who was supposed to give him the paperwork to fill out.

“Yo, Polo Shirt.” It was the same voice, and this time Mac turned. A pale, skinny guy with tattoos stretching from his wrists to his shoulders stood behind the bar of the tiki hut overlooking the marina. He had a shaker in one hand and held out an empty Styrofoam cooler in the other. He tossed the cooler toward Mac, where it landed a few feet shy and rolled to a stop at his tennis shoes.

“I need ice.” The guy shook the canister in his hand. It was only seven o’clock. Who would be drinking this early? His black T- shirt was ripped on the sides and bore Alice Cooper’s face on the front, complete with black nakes and creepy makeup. “Ice machine’s at the back of the dock store,” the guy said around the cigarette in his mouth. “Fill it all the way up, if you think you can carry it.”

The guy widened his eyes. “Who else would I be talking to? You work here, right?”

“Carla had to pull Ruiz’s boat out of storage.” He set the canister down and took a long drag on the cigarette. “El Patron doesn’t like to wait, even when he forgets to follow the rules and call ahead. Ah.” He gestured with the tip of his cigarette to a tall lift truck rounding the corner of the tiki hut, holding what must have been a thirty- foot boat high in the air. Driving the contraption was a slight woman with brown, leathery skin and brown- gray hair pulled back in a tight ponytail.

“There’s the lovely Carla now. Soon as she gets that bad boy in the water, she’ll come around with the clipboard. She does it for all the new guys. Wait for her here. After you get the ice, that is.” He flicked a glance down the walkway. “Behind the dock store.”

“Yep.” He squinted at the smoke curling from the corner of his mouth. “What’s your name, kid?”

Mac shouldered the empty cooler and followed the wooden walkway past the bar and the shop to a large ice machine out back. He set the cooler at his feet and reached for the edge of the lid, but before he could lift it, someone else sidled up next to him and yanked the lid up. A strong tanned arm plunged in elbow- deep and unearthed the scoop.

Mac straightened up and glanced at the girl next to him. “You’re cutting in line,” he said with half a smile.

“It’s not cutting if there’s no line. And I’m in a hurry.” She kept her head down as she dumped scoop after scoop of ice into the red Igloo of Miller Lite at her feet.

As she leaned forward, Mac’s eyes were drawn down by a power much stronger than his self- control. Her cutoff jean shorts were ripped at the bottom and a hole at the corner of the back pocket showed just the briefest glimpse of something red underneath.

“Who says I’m not in a hurry?” Mac tilted his head to try to see her face. “If I don’t get ice to Dave with the tattoos, I’m afraid he may add me to his blender the next time he makes a mixed drink.”

“Don’t worry about Dave. Depending on how many Bloody Marys he’s had this morning, he may not even remember he asked you for ice.” She let go of the lid and it slammed shut. Finally she turned and thrust the ice scoop at him. “It’s all yours.”

Born and raised in Mobile, Alabama, Lauren now lives with her husband and two daughters in Homewood, just outside Birmingham. In addition to her fiction, she writes a monthly newspaper column about life, faith, and how funny (and hard) it is to be a parent. On any given day, she’d rather be at the beach with her family and a stack of books. Her debut novel, THE HIDEAWAY, was a Wall Street Journal, USA Today, and Amazon Charts bestseller. HURRICANE SEASON, released in spring of 2018, is a USA Today bestseller. GLORY ROAD was chosen as one of Southern Living’s Top 25 Beach Reads. THE SUMMER HOUSE, release in June, 2020, received a starred review from Publishers Weekly. THE ONE YOU’RE WITH releases 7/6/21.

Where Romance and Pop Culture Live Happily Ever After.
All Posts
PrevPreviousNew YA Contemporary Fantasy Books To Try
Next5 Fresh Start Romances to Usher in SpringNext