Turning My Nerdy Obsession into a Profession by Joanna Hathaway 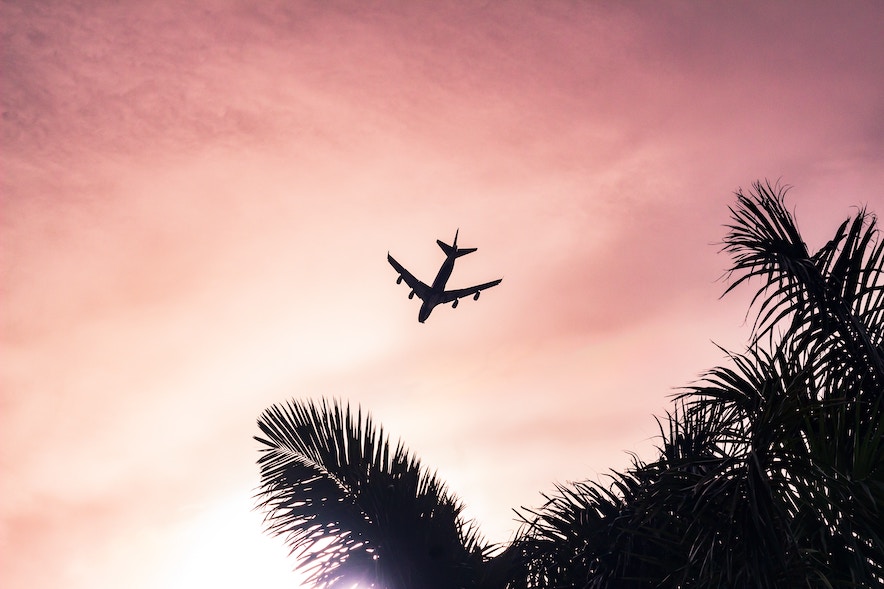 [Note from Frolic: We are so excited to welcome Joanna Hathaway to the site! Take it away Joanna!]

“Oh, I have slipped the surly bonds of earth,

And danced the skies on laughter-silvered wings;

and done a hundred things you have not dreamed of.”
– High Flight by John Gillespie Magee, Jr

I was seven years old when I first proclaimed I’d be a pilot. I’d spent the afternoon at a local airport, escorted by a friend’s father who was, as I recall, in the process of building an airplane in his basement (no, it doesn’t sound exactly safe to me in hindsight either), and at some point, he’d deposited us both by a wire fence to watch the runway while he did his important pilot things. It was sitting by that fence, on a lazy, golden afternoon, that I became smitten with the possibility of flight. The airplanes—tiny Cessnas and Pipers and such—purred up into the quiet sky and my little soul responded with magnificent delight.

I was going to be a pilot.

To my mum’s credit, she didn’t immediately dismiss the idea when I returned home with my happy announcement. She didn’t point out that I was only a child, and a girl at that, and maybe there were more attainable hobbies to aim for, like softball or ballet or even remote-control airplanes. Instead, she told me that the first girl to fly across the Atlantic, piloting her own plane, had been twelve years old, so perhaps I could beat her record? Since twelve still seemed a safe eternity away, I figured I had time, and I’d beat the record.

Somewhere in that sea of exciting years between seven and twelve—with hours spent on my swing-set, launching myself off at the highest point as I pretended to be parachuting from my imaginary plane —I lost track of the specifics to accomplish my trans-Atlantic dream. (Vicki Van Meter still holds that record, I believe, a daring young aviator with a tragic ending.) I did, however, watch Star Wars: A New Hope and a new dimension was added to my obsession: aerial dogfighting. As those X-Wing pilots made their harrowing run on the Death Star, I was captivated by both the heroism and the horror, and it wasn’t until years later that I learned George Lucas based much of his space battle visuals on the Second World War, infusing his films with the feel of those tense historical dogfights. When my burgeoning interest in history exploded around the age of thirteen, it all came together at once: I loved aircraft, I loved flight, and I especially loved learning about the pilots who participated in daring heroics that had once seemed like fantasy in a galaxy far, far away.

I started devouring history books and I didn’t look back.

A funny thing happened along the way, though. Unlike my mum, who never once doubted the sincerity of my desire to be a pilot and fly, who never once questioned my habit of returning home from the library with a hefty stack of war books, I began to notice that other people—nice people, well-meaning people—found something about my interests a tad… off. I’m sure it was a perfectly innocent question in their mind, usually revealed with a subtle eyebrow raise and a puzzling curiosity behind the eyes as they looked me up and down. But it’s a look I’ve seen enough times by now to recognize. A question I still encounter as a grown woman and a published author.

“She’s such a nice girl—why is she so interested in war?”

I get a similar look for my airplane obsession, and since the two are rather inextricably intertwined for me now, I feel I can’t address one without the other. I love talking about Spitfires and Mustangs and Hurricanes. Put me at a table with a crowd of older men, and we’ll have plenty to discuss fondly. We’ve read the same books, watched the same films, know the same facts. And you should see their expressions when they quiz me on Second World War airplane trivia and I know the answers! I’m hardly an expert (an armchair historian who has mild ADD and a difficult time remembering specifics), but I’ve spent the better part of my life reading memoirs and manuals, chasing a taste of what it might have actually been like to soar with wings in the golden age of flight. I know enough to scoot quietly under the radar.

I’ll admit, though, when I was younger and put on the spot about my interests, I wasn’t quite sure how to explain myself. I wanted to be a pilot. I enjoyed war stories. I was a hopeless romantic who dreamed of true love. These disparate parts felt entirely natural, but still made me feel like some kind of novelty, or worse, an anomaly. Looking back now, I think I know the answer I couldn’t quite articulate as a teen. I wasn’t fascinated with war itself. Not the ugly parts, at least. But I was fascinated by the lives of other young people, not much older than I, who’d “danced the skies on laughter-silvered wings” and also found themselves a breath away from death, learning to both fly and kill at impossible heights. Flying itself is no easy feat. I was given the controls of an airplane once, right as we were hurtling up off a runway, and let me tell you—all of that reading did literally zippo to prepare me for the actual moment of going airborne! Every muscle froze, my heart pounding, hands sweaty on the controls, and the only reason I’m alive today is because the pilot beside me did most of the hard work. (Okay, he did all of it.) My dreamy vision of “natural instinct” disappeared as soon as our wheels left the tarmac. Still, I definitely gained a more visceral appreciation for the courage it took the young pilots in my history books to fly into deadly skies with mere hours of training. There were no fancy computers in those WW2 airplanes. Pilot skill alone kept the whole thing aloft—hands and feet and eyes working in tandem—along with a few weapons to be aimed accurately. Then add in someone else in another airplane, chasing right behind with their own guns, and it’s getting pretty extraordinary.

I’ll confess, I’m not sure I’d have made it more than a few hours. Which might be why all of my childhood daydreams on the swing-set had me parachuting out of my aircraft …

In any case, I think it was this twin fascination that captured my younger self so completely: the allure of the thrilling sky and the tragedy of early death. When you’re a teenager, still confined to the established boundaries prescribed for you by adults, there is little that moves you more than the reckless desire to be free, at last, and the heart-tingling terror of not actually getting to reach that moment in life. Many of the young pilots I read about didn’t get their chance at adventure and love. They chose to sacrifice it for a greater good, and that was deeply convicting to me. Often, people seem to miss, at first glance, what our interests truly say about us. Most of us don’t love things just for the face-value reasons. We’re diving deeper, reaching for what’s pulsing beneath the surface, some question or curiosity that is unique to us alone. We can’t explain it, but if we chase it, our life begins to feel more whole and complete, all the disparate pieces come together at last.

I still get a thrill when I hear the sound of engines in the sky. The sight of an airplane way up high, especially a small one with propellers, makes my chest swell with a wild wistfulness I can’t explain. Whether I ever become an official pilot or not, I want to honour the certainty of my younger self in everything I do. She didn’t know what others would think, and she didn’t care. She was simply responding to the curiosity in her heart, excited to see where it would lead, what worlds would open up with a few simple questions. The heroes she found there inspired her to be the best version of herself at this moment in time, this moment in history.

And at the end of the day, that’s why this nice girl writes about war.

JOANNA HATHAWAY was born in Montréal and is an avid storyteller who was inspired to write after reading her great-grandfather’s memoirs of the First World War. A lifelong history buff, she now has shelves filled with biographies and historical accounts, and perhaps one too many books about pilots. She can often be found reading, traveling, or riding horses.

Her debut novel DARK OF THE WEST is the first in a World Wars-infused fantasy series of forbidden love and deadly revenge. STORM FROM THE EAST will hit shelves on February 11, 2020. Find her here: https://www.joannachathaway.com/ 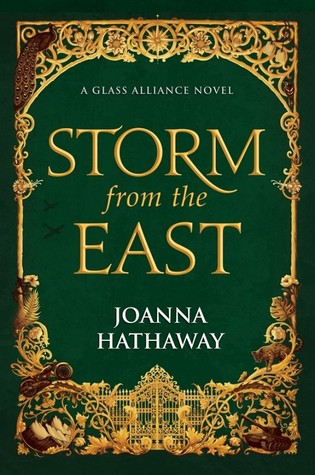 Storm From the East by Joanna Hathaway, out Feb. 11th!

War has begun, and the days of Athan’s and Aurelia’s secret, summer romance feel a world away.

Led by Athan’s father, the revolutionary Safire have launched a secret assault upon the last royal kingdom in the South, hoping to depose the king and seize a powerful foothold on the continent. Athan proves a star pilot among their ranks, struggling to justify the violence his family has unleashed as he fights his way to the capital―where, unbeknownst to him, Aurelia has lived since the war’s onset. Determined to save the kingdom Athan has been ordered to destroy, she partners with a local journalist to inflame anti-Safire sentiment, all while learning this conflict might be far darker and more complex than she ever imagined.

When the two reunite at last, Athan longing to shake the nightmare of combat and Aurelia reeling from the discovery of a long-buried family truth come to light, they’ll find the shadow of war stretches well beyond the battlefield. Each of them longs to rekindle the love they once shared . . . but each has a secret they’re desperate to hide.

Where Romance and Pop Culture Live Happily Ever After.
All Posts
PrevPreviousBook of the Week: Lilian and the Irresistible Duke by Virginia Heath
NextThe Good, The Bad, The Mad: Revisiting Mad Men in 2020Next