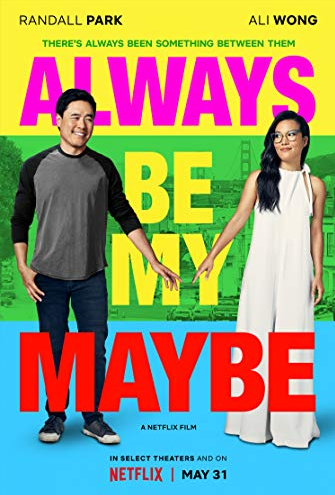 We all know and love stand-up comedienne Ali Wong. If you’re not familiar with her material from Netflix specials Baby Cobra and Hard Knock Wife, kindly stop reading this article now and go watch them. Here are the necessary trailers:

So anyway, she’s one of the priceless crown jewels of comedy, and irl she’s friends with this guy, Randall Park.

Together, they co-wrote and starred in a fabulous little romantic comedy called Always Be My Maybe.

It comes out Friday on Netflix, but Frolic attended an exclusive screening, and we’re here to tell you that it’s the BEST romantic comedy film that’s been out in a while.

The film is about two people – Marcus and Sasha, who grew up next door to each other in San Fransisco and have always been best friends. Right before they head off to college during a very tense time, they have sex for the first time in the back of Marcus’s Parmesan-scented Corolla. Afterwards, things get weird. Harsh words are exchanged. Sasha storms off and fifteen years go by without either of them speaking to the other.

At the END of that fifteen year silence though, Sasha is a fabulous celebrity chef who is engaged to her manager, a grade-A douchebag. Marcus is still living with his dad, working for his air-conditioning company, playing in the same band at the same venue, and dating free spirit Jenny who sports Asian dreadlocks.

When Sasha comes back to San Fransisco temporarily to open her new restaurant, she reconnects with Marcus thanks to the help of her nosy best friend/assistant Veronica, played by Michelle Buteau. They become friends again, with definite chemistry between them.

The biggest difference between Marcus and Sasha is their undying need to stay as close to home/get as far away from home as possible, respectively. Then you know what comes between them?

Where Romance and Pop Culture Live Happily Ever After.
All Posts
PrevPrevious5 Questions With: Amber Smith, Author of ‘Something Like Gravity’
NextLove YA: Top 3 Y.A. Reads for the Week of May 28th!Next