We’ve Got To Talk About How Good The Great Is 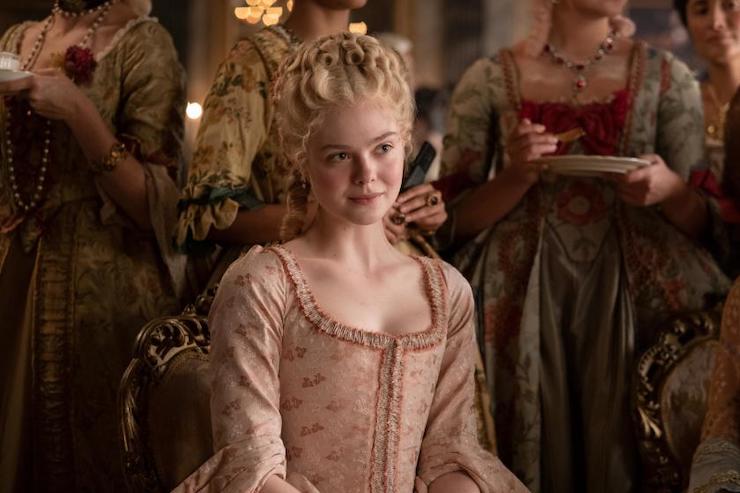 Here’s something true: I had a really difficult time starting this piece, because I both could not wait to write about Hulu’s new show The Great and also had a hard time figuring out what else to say besides, “It’s so good! Watch it! It’s SO GOOD!”

So, yes. The Great is very, very good.

If you haven’t seen the ads for the show popping up in your social media feed of choice, I’ll give a brief summary. The Great is an occasionally true television show about the young life of Catherine the Great right after she moves to Russia to marry Peter (the…not great). Viewers get glimpses of her everyday life full of wacky customs, historical misogyny, and sycophantic court members. Catherine doesn’t love Peter, but she definitely does love progressivism and power.

Let’s dive in and talk about what makes The Great so great!

In her role as Catherine, Elle Fanning has the difficult task of giving us a heroine to root for without making her too perfect or ahead of her time. She imbues her performance with charm and a bubbly optimism that kept me engaged in each episode. That said, with every eyebrow furrow and square-shouldered saunter, she also manages to convey Catherine’s shortcomings. For example, Fanning’s Catherine confidently waxes poetic about enlightenment and liberation while her maid/BFF/co-conspirator is still forced to walk a step behind her and help dress her for major political moments.

In Fanning’s performance, viewers are also treated to an extra layer of fun whenever she’s committing subterfuge of any kind. Every fawning compliment she gives to her hated husband is laced with delicious subtext. Every openly-stated plan to inspire confidence in her coup is tinged with uncertainty beneath the strong veneer. Catherine’s character is playing a dangerous game, and Fanning’s charismatic persona demonstrates the stakes on multiple levels throughout the series.

This marvelous take on a young Catherine the Great reminds me of another blur-the-lines-of-history performance that I loved in the last year: Hailee Steinfeld’s portrayal of Emily Dickinson in Apple TV’s show, Dickinson. Performances like these are refreshing and vital because they remind us of why we find these historical figures so compelling…but also that these characters were real people with flaws and shortcomings like all of us!

On the other hand, we have Nicholas Hoult’s performance as the delightfully terrible Emperor Peter III. Hoult’s Peter is rude, entitled, vengeful, and dimwitted. But (and I almost hate to say it…) he’s also so fun to watch.

This is due in part to the amazing writing that positions Hoult’s Peter as a lost fool. His first appearance onscreen is—I kid you not—a re-contextualized version of one of Michael Scott’s most famous bits from The Office. Much like any great literary allusion, I believe with every fiber of my tv-loving being that this is intentionally meant to show us exactly the kind of person Peter is.

Would he rather be feared or loved? Well, much like Michael Scott, it’s clear he wants people to be afraid how much they love him. He’s someone who longs for love, but is so out of touch with real emotions and compassion that he doesn’t have the faintest clue of how to inspire that kind of love in his own “friends,” let alone an entire country. Hoult’s performance never lets us forget how terrible Peter is, but his expressive eyes and varied intonations also help us understand the vulnerabilities of a leader who’s in way over his head as he tries to replicate his father’s leadership and make people think the emperor could be great again.

If the occasionally true version of history in The Great allows us to see the flaws in Fanning’s Catherine, then it also allows us to see the sad slivers of humanity in Hoult’s Peter. Don’t get me wrong; this doesn’t mean Peter is good or worthy of redemption. Rather, the nature of The Great reminds us of the complexity of famous figures both in the past and the present.

One of the top strengths of The Great is its ensemble cast full of supporting characters whose political allegiances, interpersonal dynamics and levels of tolerance for absurdity go a long way in fleshing out the world of the Russian court.

There’s Count Orlo, the mild-tempered intellectual whose instinct is to play it safe. There’s Marial, Catherine’s maid who longs to be restored to her previous status as a lady. There’s Archie the Archbishop, whose allegiances and perceptions of the situation are ever-shifting based on who might be most willing to uphold the political power of the church. And then there’s Grigor and Georgina, a married couple who Peter considers to be his closest friends even though each member of this triad has the emotional power to dismantle the bond between the other two. These characters, along with many others, make The Great much richer as a story.

One aspect that also makes The Great’s cast so special is that the show’s occasionally-true-ness provides opportunities for more racial and sexual diversity. Instead of the usual period drama question of, “is this what [insert character] really was like?” The Great’s flexible relationship to history allows the creators to find and create the best performers and performances to suit the larger story. Of course this approach doesn’t fully solve the problem that marginalized people of all kinds face when it comes to seeing themselves in history and historical fiction, but it’s still important that The Great is willingly tackling the problematic trend of all-white period pieces.

So, if you’re trying to find the next wonderful show to get into, might I suggest The Great? All of these performances along with the show’s wacky-yet-serious tone make it the perfect show to parcel out a little bit at a time or to devour in one Huzzah-filled binge!

Erin Phelps is a lover of swoony romance novels, superb television and movies, and splendid comedic podcasts! In addition to writing for Frolic, Erin works at a fun customer service-oriented job at a salon. Sometimes, she can even be found teaching Women’s and Gender Studies at her local college! Her love language is well-constructed pop culture references and her favorite treat is a caramel latte.
All Posts
PrevPreviousDaily Frolic: Female Stand-Up Comedy Specials to Stream!
NextMy Hip Dad Shares His Work from Home PlaylistNext