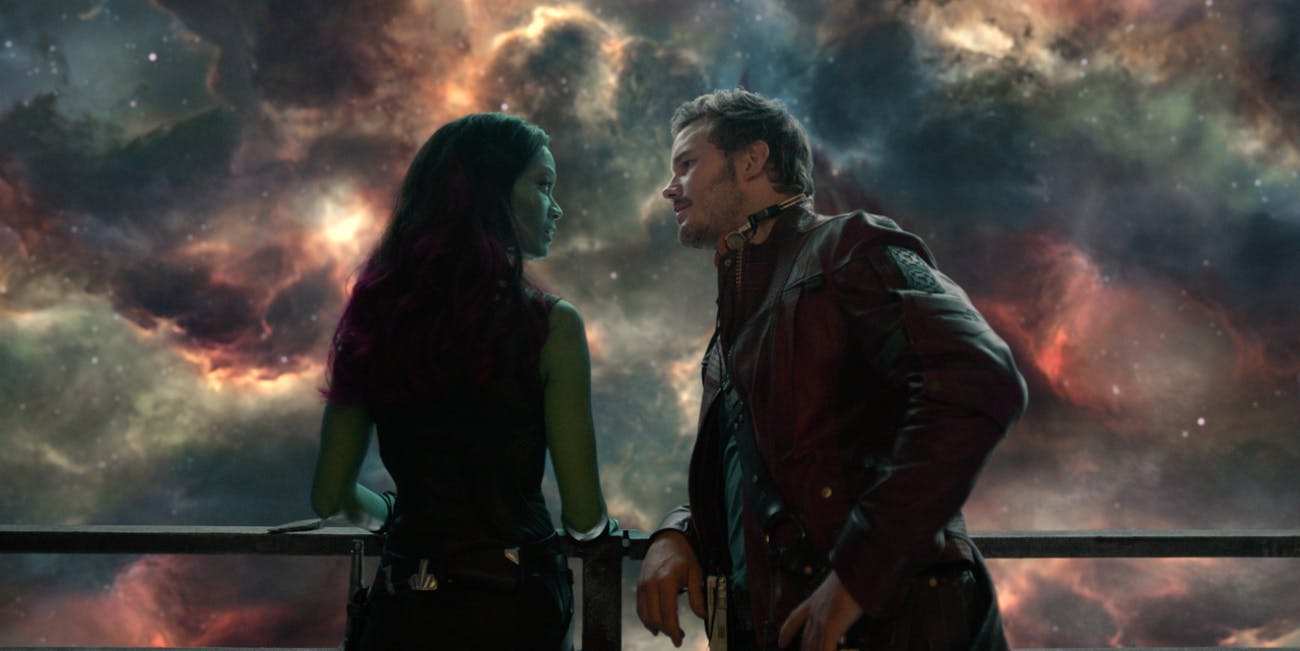 Like most people who are into the Marvel movies over the last decade, I saw Avengers: Endgame during opening weekend. I have THOUGHTS. So many thoughts. Most of them are good thoughts, but of course I have issues with bits and pieces.

This post is about that I can FINALLY, after like… How many movies? Three? Four? I can FINALLY get into the idea of a Peter Quill-Gamora romance.

You’ve been warned. I cannot be held responsible if you keep reading.

Still with me? Cool!

I’ve never been a huge Peter Quill fan. He’s funny, sure, but he’s the ultimate fuckboy. He’ll give you a good night (probably?) and then the next morning, he’ll go off on a space adventure and forget you’re still in his bed. And he’ll forget your name.

But at least he’s funny?

Gamora is everything that is badass. She’s a little snarky, has some serious daddy issues, can murder you skillfully in a hundred different ways, and has a thread of vulnerability because she really does want to be a family with her sister.

Unsurprisingly, I love her like a love song, and I want the best for her.

In the first Guardians of the Galaxy, there’s definitely chemistry between Quill and Gamora, but it’s totally secondary to everything else going on. They’re thrown together because of a twist of fate and that same twist of fate keeps them together through the next movie. Obviously Quill would jump her if given half a chance, but she’s not fling material and so isn’t going to be one of his many.

But sometime between the first and second movie, he starts wearing her down. And I do mean wearing her down. She’s still protesting and they haven’t done anything (probably?), but by the end of the movie, he finally gets her to admit there’s something there.

Fast forward to Avengers: Infinity War and they’re obviously a thing. And Peter Quill is still a fuckboy at this point. He loves Gamora, but he can’t even call her his girlfriend while he’s staring down a gun at her as she begs him to kill her for the greater good. He’s still basically calling her his booty call. Because of course he is.

THIS DUDE DOES NOT DESERVE THIS WOMAN. Not even close.

Which brings us to Endgame.

I know a lot of people (myself included) were FURIOUS about how Gamora was done dirty wrong in Infinity War. That’s a whole different post, though. But the end result is that we wanted to know how it would be made right.

Brilliantly, as it turns out.

There’s some fancy timey-whimey stuff and BAM, we get Gamora back. Except not current day Gamora. We get pre-Guardians Gamora. This earlier version of her might be willing to give her sister a chance, to fight her father so that good can prevail, but she is NOT impressed with this Peter Quill fuckboy.

As Nebula, the sister, says in Endgame: It was between him and a tree.

At the end of Endgame, Peter Quill, now actually realizing what life would be like without the lady he couldn’t man up enough to be in a real relationship with, is determined to find Gamora (who disappeared sometime after the final battle). I’m assuming this is what the third Guardians movie will cover.

Why does this suddenly make me get aboard the Peter Quill-Gamora express?

Because now it has all the markings of my favorite romantic trope – the second chance romance.

This Gamora has finally accomplished what she always wanted – threat of her father is gone. She hasn’t spent untold amount of time closed in on a ship with fuckboy Peter Quill. She’s free.

Which means Quill has to actually become a man who’s capable of deserving her. He has to grow up. Being funny isn’t enough (was it ever?). Now he knows enough to know what he’s missing without her in his life, and that makes for one hell of a driving force.

In my perfect world, Quill spends a whole lot of time tracking Gamora down and then proceeds to do whatever it takes to earn her time and affection. They become actual equals instead of two people who happened to occupy the same space and get into some proximity almost-dating scenario. It can actually be a real relationship.

New York Times and USA TODAY bestselling author Katee Robert learned to tell her stories at her grandpa's knee. Her 2015 title The Marriage Contract was a RITA finalist, and RT Book Reviews named it 'a compulsively readable book with just the right amount of suspense and tension." When not writing sexy contemporary and romantic suspense, she spends her time playing imaginary games with her children, driving her husband batty with what-if questions, and planning for the inevitable zombie apocalypse.
All Posts
PrevPreviousDaily Frolic: Taron Egerton is literally too cute talking about ‘Rocketman’
NextHow to Annoy Your Boss: A “You Probably Shouldn’t Do This” Max Monroe ListNext