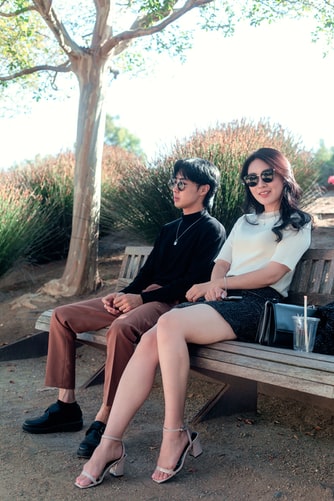 [Note from Frolic: We’re so excited to welcome author Gloria Chao to the site today! She’s chatting about the inspiration behind her novel Rent a Boyfriend! Take it away, Gloria!]

Dating is hard enough, but traditional immigrant parents add a whole new set of challenges. I was born and raised in the U.S., but my parents held on to cultural traditions from their upbringing in Taiwan. I wasn’t allowed to talk to boys in high school, but as soon as I started college, my mother did a 180 because, in a few years, I was going to “become too old to nab an eligible bachelor.” She constantly asked about boyfriends, wanting to meet and judge every prospect. She wasn’t the easiest to please. One boy was presumed likely to cheat or leave because his father had divorced and remarried. Another was “too tall” at six-foot-four and my mother worried I’d hurt my neck looking up at him. Two of my boyfriends were objectionable because they were younger than me and, according to her, “men hit pause on the marriage when women hit men-o-pause,” so I should look for an older husband who would be wrinkly and undesirable by then. I have child-of-immigrant friends whose parents disowned them for dating someone who couldn’t have children. I know someone who, at the request of their mother, broke up with his girlfriend because their families belonged to opposing political parties in Taiwan.

On the other hand, my parents have loved other potential boyfriends before even meeting them because either they have lucrative jobs or their family goes to the right church, or, ding ding ding, both. The typical reasons I should be interested in their latest setup were: family money (“His family had two companies that went public!”), education (“He went to Harvard!”), career (“He’s a doctor!”), or his parents (“They’re good so he has to be good too!”).

This pressure is not unique to one culture but is salient enough in some Asian countries that women sometimes resort to hiring fake boyfriends. These fake boyfriends can be found in the classified ads or hired from companies that specialize in curating the perfect significant other to please your demanding parents. My family members and friends from abroad are familiar with this practice, often discussing it as matter-of-factly as an American might discuss Match.com. In China, hiring a significant other is especially common around Chinese New Year, when the pressure to bring the right person home is especially high. (See here for a glimpse into the family rental industry in Japan.)

When I learned that women were hiring fake boyfriends, my first thought was: I get it. In addition to my experiences with my parents judging my significant others, I also understood the pressure to make your parents happy regardless of the cost to yourself. This same pressure was why I walked my parents’ desired path for the first twenty-seven years of my life: I went to MIT and then graduated at the top of my dental school class. As a germophobe, I was miserable in dental school and wrote novels in secret to get me through. After five years of dentistry, I couldn’t spend another second in someone else’s mouth. I became a full-time author, a change that would lead to a multi-year rift with my family.

I explore all of these challenges in my writing. And more specifically, I channeled these aforementioned experiences in my third book, Rent a Boyfriend, which brings the boyfriend rental market to America. I created a company, Rent for Your ’Rents, that trains operatives to match to the desires of the clients’ parents. In addition to offering classes so operatives can convincingly have different “careers” for each job, Rent for Your ’Rents classifies the parents into categories that inform the operatives’ behavior. For example, with Type C parents, affection between client and operative is limited to hand grazes and eye contact. My parents are so Type C that when my father walked in on my boyfriend giving me a piggyback ride (an actual piggyback ride, not a euphemism for something sexier), I let go and hit my head on the floor. (Yes, that scene is in the book.)

The main character, Chloe, turns to Rent for Your ’Rents to hire Drew when her parents pressure her to accept a proposal from the wealthy but slimy flagship bachelor of their tight-knit Asian-American community. While writing, I channeled the pressure I received from my mother to date the son of her friend—a boy she’d never met!—even after I was already dating my now-husband. =

I didn’t have to reach far for Rent a Boyfriend’s story elements. Or for the humor. Chloe’s mother and my mother both dread their daughters’ menopause, both want their daughters to be chaste but also have sexy whale tails (“No hanky-panky! But wear sexy underwear in case it peeks out!”), and both make strange Frankenfood (scrambled eggs with a Kraft single on raisin bread with honey is not an appealing breakfast in any culture). Sorry, Mom, I love you!

I wanted to write a fake dating story inspired by truth, one that is relatively unfamiliar in America. And I wanted to give a voice to the experiences of so many children of immigrants. I started writing from this perspective because there are so many funny, untold stories to share. (Did your parents reuse old margarine tubs as Tupperware and store them in the oven? Do your parents leave you two voicemails a day?) I’ve been delighted to learn that pieces of my stories resonate with people of all ages and backgrounds. Because at its heart, Rent a Boyfriend is a romantic comedy that explores the universal themes of love, family, and learning to be yourself. Even if you haven’t hired a fake boyfriend, you can probably relate to feeling pressure from others or society to find the right partner, and the struggle to balance that with your own desires. By including so much of myself in the book, I hope others can find a piece of themselves too (or at the very least, be entertained by my experiences!).

Gloria Chao is the critically acclaimed author of American Panda, Our Wayward Fate, and Rent a Boyfriend. When she’s not writing, you can find her with her husband on the curling ice or hiking the Indiana Dunes. Her award-winning books have been featured on the “Best of” lists of Seventeen, Bustle, Barnes & Noble, PopSugar, Paste Magazine, and more. 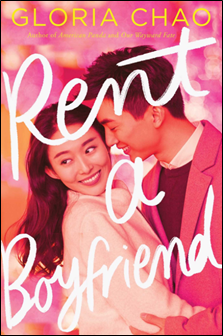 To All the Boys I’ve Loved Before meets The Farewell in this incisive romantic comedy about a college student who hires a fake boyfriend to appease her traditional Taiwanese parents, to disastrous results, from the acclaimed author of American Panda.

Chloe Wang is nervous to introduce her parents to her boyfriend, because the truth is, she hasn’t met him yet either. She hired him from Rent for Your ’Rents, a company specializing in providing fake boyfriends trained to impress even the most traditional Asian parents.

Drew Chan’s passion is art, but after his parents cut him off for dropping out of college to pursue his dreams, he became a Rent for Your ’Rents employee to keep a roof over his head. Luckily, learning protocols like “Type C parents prefer quiet, kind, zero-PDA gestures” comes naturally to him.

When Chloe rents Drew, the mission is simple: convince her parents fake Drew is worthy of their approval so they’ll stop pressuring her to accept a proposal from Hongbo, the wealthiest (and slimiest) young bachelor in their tight-knit Asian American community.

But when Chloe starts to fall for the real Drew—who, unlike his fake persona, is definitely not ’rent-worthy—her carefully curated life begins to unravel. Can she figure out what she wants before she loses everything?