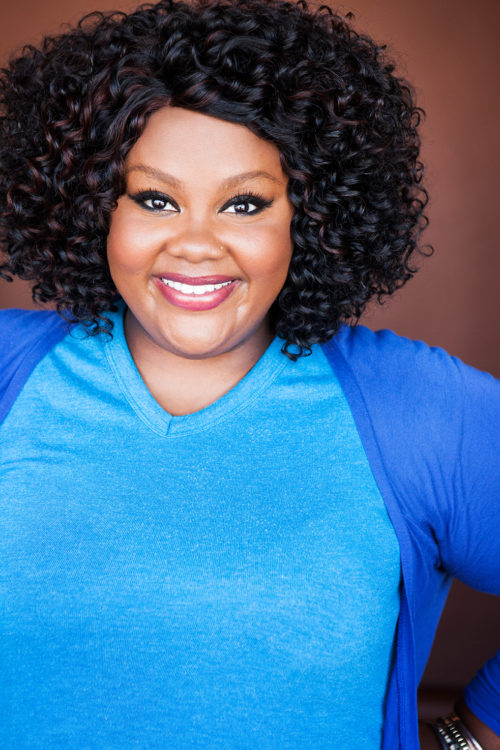 Nicole Byer is one of those media figures who almost everyone seems to know from something.

Lately, she’s become one of my personal favorite entertainers to appreciate on multiple platforms. Full disclosure: I have been told more than once that I have a very Nicole Byer-esque energy…so I’m predisposed to get on board with her work.

From comedy to podcasts to Instagram stories to acting, Nicole Byer seems like the kind of person to do it all!

Nicole Byer is a stand-up comedian whose voice is brash, silly, raunchy, and truth-telling! Be warned: it is suuuuuuper R-Rated…but when you need some sex humor and silliness, she’s your gal!

One of the easiest ways to check out her stand-up is in her half-hour special as part of Netflix’s Comedians of the World series. In this special, she spends a lot of her time talking about what it’s like to be a fat woman in America–including details on dating and how folks perceive her.

She begins the special with fat jokes that she gives herself permission to tell as a fat person—but she also boldly proclaims that being fat and beautiful are not mutually exclusive. As a fat person, I’m obsessed with how she uses comedy to unpack and goof around with fatphobia!

In fact, Nicole’s upcoming book is bound to be full of more of the hilarious bits that make me love her comedy.

How do I know this, even though I haven’t read it yet?

Well, it’s called #VERYFAT #VERYBRAVE: The Fat Girl’s Guide To Being #Brave And Not A Dejected, Melancholy, Down-In-The-Dumps Weeping Fat Girl In A Bikini.

So, yes…I think we can keep counting on her for fat girl funny business!

Our woman to watch is probably best known for her work as the host of Netflix’s successful reality show Nailed It!

If you haven’t seen Nailed It!, it’s basically a baking show with amateur home bakers who are given near-impossible challenges to complete. The winner essentially gets a prize for being the least terrible of the bunch!

Byer’s chipper voice, quick retorts and general cheerfulness make her an iconic host for this show. In another person’s hands, hosting this show could either become over-cynical or far too sugarcoated (pardon the slight pun).

Instead, Nicole Byer’s star power steers the show in a lovingly ribbing direction that keeps viewers like me tuning in. It’s also extra-funny to me as someone who has watched her incredibly adult humor, because Nailed It! is such a family-friendly show.

Her TV work isn’t just bound to hosting, though! She has appeared in guest roles on shows like The Good Place and Brooklyn Nine-Nine and as a voice actor on shows like Tuca and Bertie! Beyond Nailed It!, it’s always a delight to find her as a guest star on the comedies I love.

In addition to all the other great stuff she does, Nicole Byer is a prolific podcaster!

She started out in the podcast world with her show Why Won’t You Date Me?, in which she talks to former boyfriends, good friends, and other guests about dating and sex stories. People share about their Tinder profiles, how they met their spouses, and all kinds of other surprising love-related topics. She lives up to the title of the podcast by asking each guest whether they would date her!

Another great Nicole Byer podcast is Best Friends. This podcast is co-hosted with Nicole’s real-life best friend, Sasheer Zamata. Episodes are a grab bag of friendship treats: from catch-ups to taking Buzzfeed quizzes together to asking guests about their own best friendships, this podcast is (to co-opt Byer’s own famous phrasing) a dream and a treat.

Most recently, Nicole Byer started another podcast called Newcomers: Star Wars. In this one, Nicole and her co-host Lauren Lapkus watch all of the Star Wars movies for the very first time! As a pop culture nerd, I personally love anything that might produce new insights to major pieces of media that our culture usually sees through a nostalgic lens!

Finally, I just need to shout out how much I like Nicole’s Instagram. It’s a favorite account of mine because, in addition to general promotion of all her projects, there are all kinds of funny behind-the-scenes videos and pictures that prove Nicole would be a fun person to hang out with!

PLUS she’s been taking pole dancing classes, and I’m always inspired by the fun she has trying new routines and practicing at her pole studio!

Here’s to all the cool things Nicole Byer does—I can’t wait to see what other fun things she decides to do next!

Erin Phelps is a lover of swoony romance novels, superb television and movies, and splendid comedic podcasts! In addition to writing for Frolic, Erin works at a fun customer service-oriented job at a salon. Sometimes, she can even be found teaching Women’s and Gender Studies at her local college! Her love language is well-constructed pop culture references and her favorite treat is a caramel latte.
All Posts
PrevPreviousKeeping Close During Isolation: My Online Book Club
NextDaily Frolic: Emily Hampshire Talks Schitt’s Creek FinaleNext