Yes I Watch Soap Operas … So What? by Carly Phillips 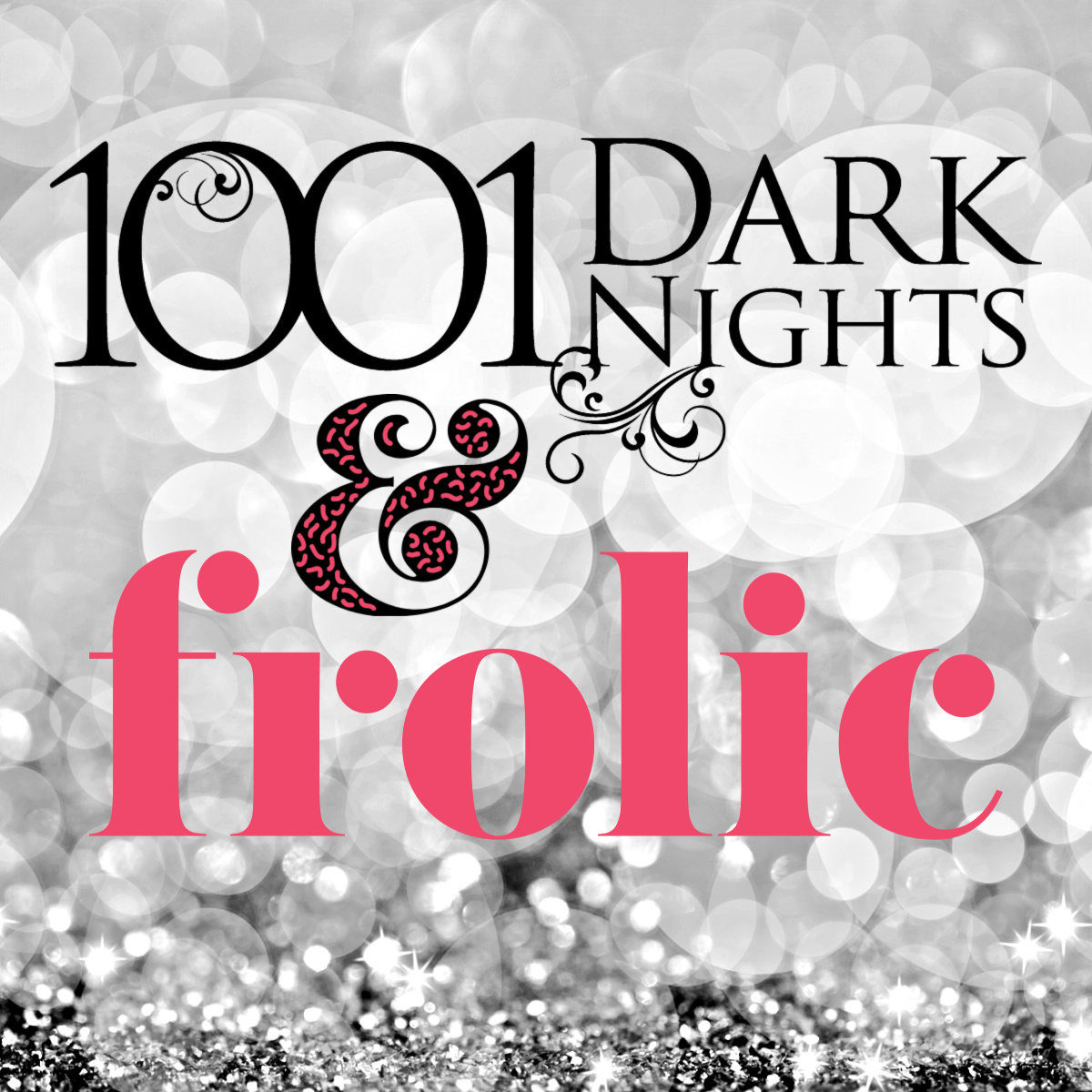 [Note From Frolic: We have a thing for novellas. A BIG thing. In the next installment of an ongoing series, we bring you a post from author Carly Phillips, whose novella ‘Take the Bride‘ with our friends at 1001 Dark Nights  is out now!]

I am an avid soap opera watcher and have been ever since I was, oh, around ten years old. My mother used to watch (she no longer does and this makes me sad), as did my grandma. I would watch ABC straight through the day (if I was home sick from school) which usually translated into: Ryan’s Hope (30 min), All My Children (60 min), One Life to Live (60 min), General Hospital (60 min), and The Edge of Night (30 min). This adds up to 4 hours of television drama a day for the last, at least, 44 years. Is it any wonder I ended up writing romance? Sadly over the years, my shows were canceled, leaving me today with Days of our Lives (60 min) and General Hospital (60 min), which in my world is not nearly enough soapy drama to make me happy. I am quite certain these hours of watching resulted in me writing soapy, tropey, dramatic, character-driven romance. 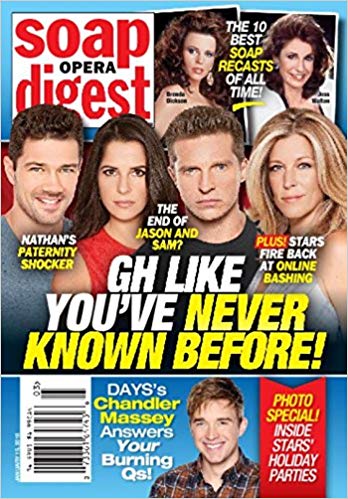 Even better, I receive the Soap Opera Digest magazine in the mail. Weekly. I used to get Soap Opera Weekly until they canceled that, too. How could this possibly be useful in my life? Names. Character names. Set within the pages of these magazines are the names of the characters I watch and love as well as the real names of the actors portraying them. A little mixing, a little matching and voila! Characters for my novels are born.

People make fun of me. Yes they do. I TiVo my soaps. I watch them to catch up. And you know what? You’d be amazed at the parallels to real life (when they aren’t drifting off into the devil possessed Marlena or Casey the alien, that is). General Hospital is currently doing a cult storyline that parallels the NXIVM sex trafficking cult that was recently brought down and though baby swaps are the norm in soap land, they are also portraying political races that parallel what’s happening in America today as well as other more fun stories like the serial killer stole his twin brother’s identity. But seriously. It’s good drama! 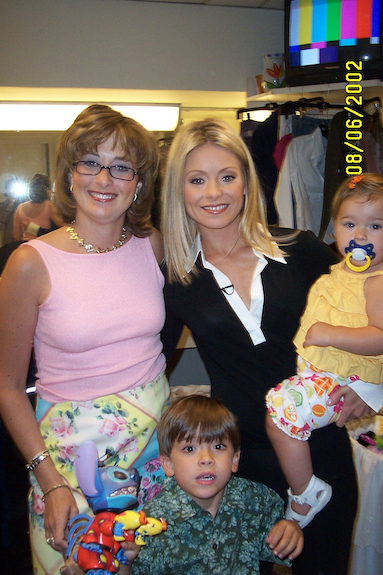 And often I found nuggets of story ideas for my own books once I began writing them. Back in the early days, Kelly Ripa portrayed a young alcoholic woman with an abusive mother that led me to put together the background for a heroine in one of my earliest books. This isn’t my only connection to the beautiful Kelly Ripa and if you’ve really been reading me for a long time, you’ll remember she picked my book THE BACHELOR as the first romance novel in a nationally televised book club back in 2002 and I was traumatized being on LIVE with Regis and Kelly … Live. I was even featured in Soap Opera Digest for a brief interview on my favorite romantic soap opera couple – JaSam – Jason and Sam on General Hospital. So yes, the soap world and I have many connections. 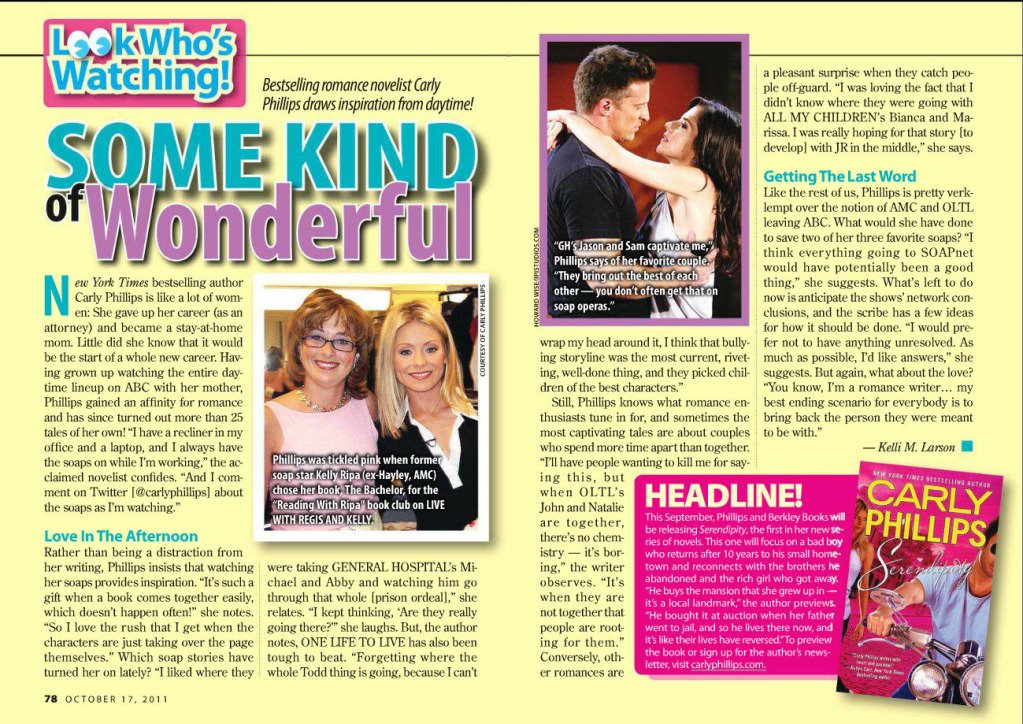 My current story, TAKE THE BRIDE for 1001 Dark Nights, has its foundation in the Elton John song, KISS THE BRIDE but how many soap weddings have been interrupted by old lovers standing up and yelling I do when the preacher asks if anyone objects? Too many to count!

I guess my point is, there can be more than entertainment value in soaps and if you’re a writer, you’re seriously missing out if you aren’t indulging. And if you’re just a viewer or a reader, well, good old-fashioned soap operas are fun. Not as much fun as reading a romance, however. Why? Because we guarantee you the Happily Ever After no soap opera ever does. And if you still want to laugh at me because I watch? Go ahead. I’ll still be enjoying and turning out my romances because they’re both what I love to do. 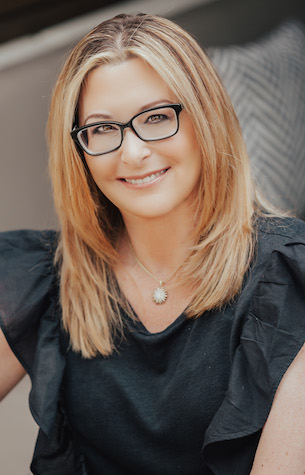 Carly Phillips gives her readers Alphalicious heroes to swoon for and romance to set your heart on fire, and she loves everything about writing romance . She married her college sweetheart and lives in Purchase, NY along with her three crazy dogs: two wheaten terriers and a mutant Havanese, who are featured on her Facebook and Instagram. She has raised two incredible daughters who put up with having a mom as a romance author. Carly is the author of over fifty romances, and is a NY Times, Wall Street Journal, and USA Today Bestseller. She loves social media and interacting with her readers. Find her here: http://www.carlyphillips.com/ 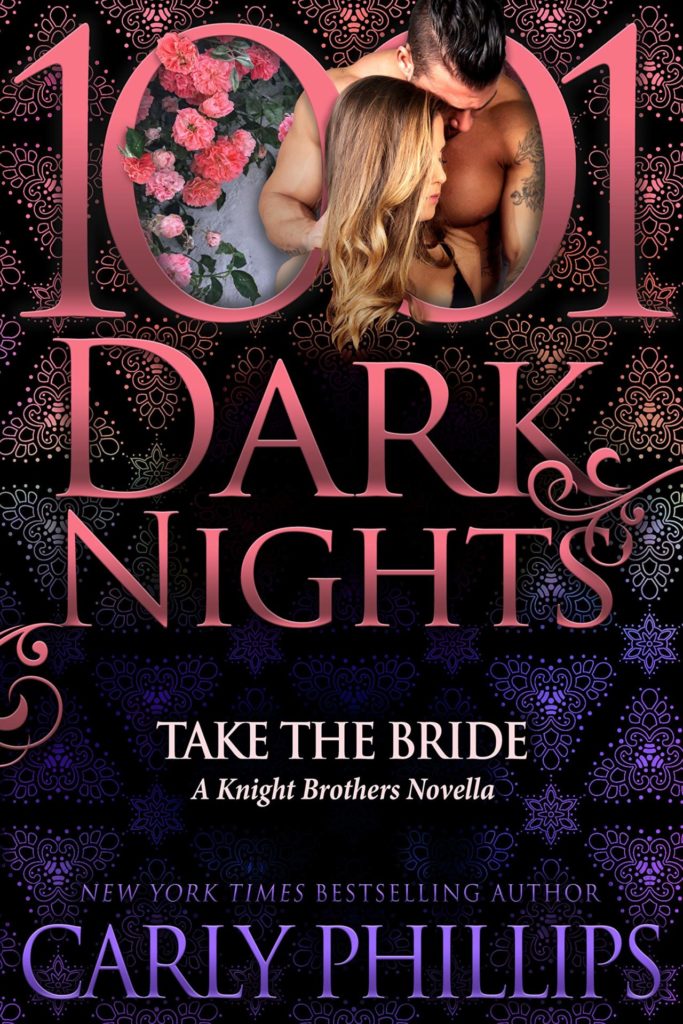 Take the Bride by Carly Phillips, out now!

She used to be his. Now she’s about to marry another man.

Will he let her go … or will he stand up and take the bride?

Ryder Hammond and Sierra Knight were high school sweethearts. Despite him being her brother’s best friend, their relationship burned hot and fast…and ended with heartbreak and regrets.

Years later, she’s at the altar, about to marry another man.

He’s only there for closure, to finally put the past behind him.

But when the preacher asks if anyone has a reason the couple shouldn’t wed, she turns around and her gaze locks on his.

Suddenly he’s out of his seat.

And ultimately stealing the very pissed off bride and taking her to a secluded cabin.

He wants one week to convince her they’re meant to be, to remind her of the fiery passion still burning between them.

When their time together is up, will she walk away and break his heart this time, or will he finally have the woman he’s wanted all along?

Where Romance and Pop Culture Live Happily Ever After.
All Posts
PrevPreviousVideo: Book Nerdery with Avery Flynn and Beverly Jenkins!
Next5 Questions With: Jess Rothenberg, Author of ‘The Kingdom’Next