A Love Letter to the Broadway Show The Lightning Thief: The Percy Jackson Musical 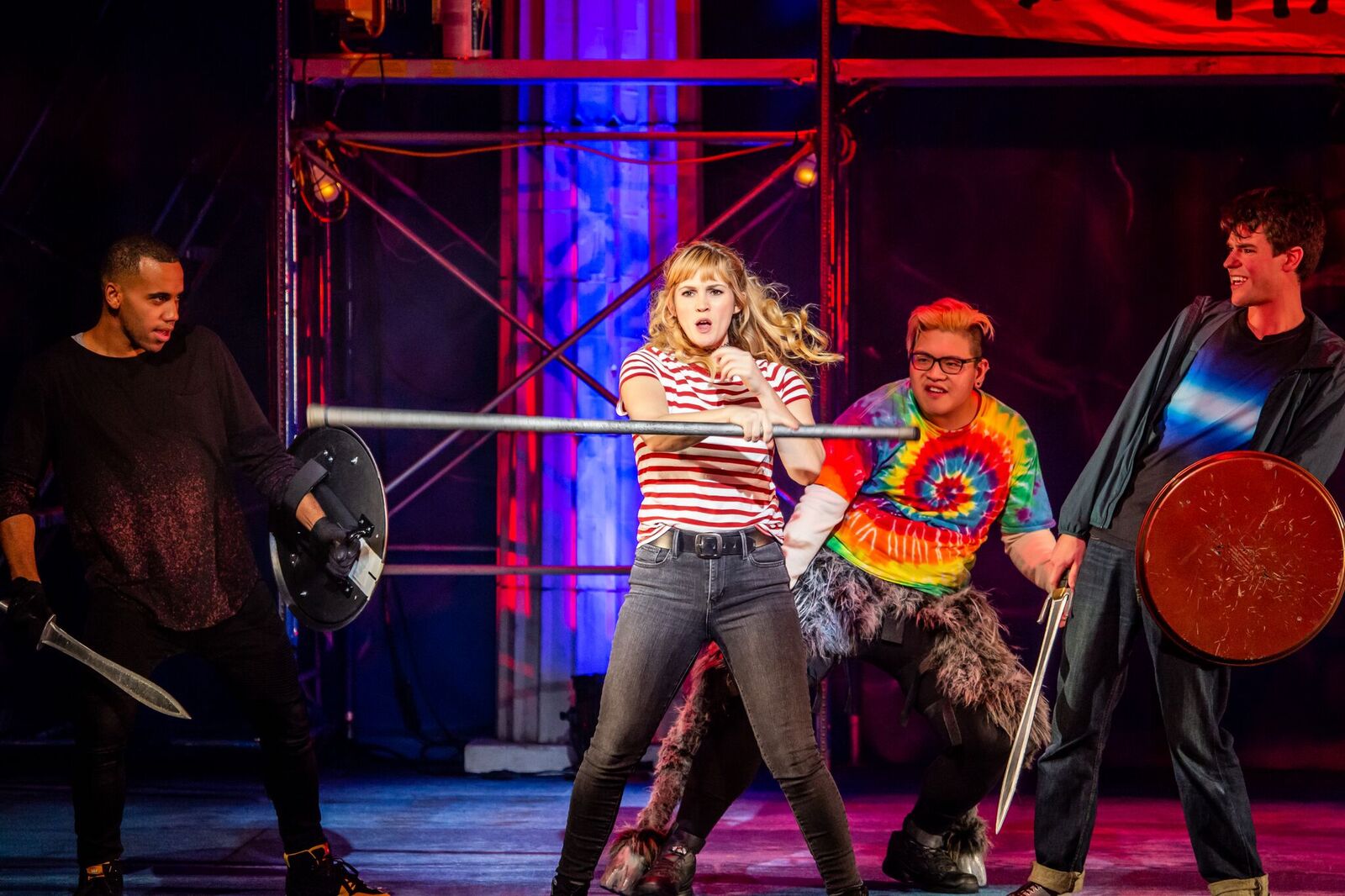 Book lovers, let’s face it: no film, TV show, or other media is ever going to fully capture every aspect of the world within the pages. But there’s something even more important than capturing the plot and details of a book: capturing the spirit of the story. It’s rare to find a piece of media that does this so effectively. But we’re not here to talk about the adaptations that made us want to tear our hair out. Today, we’re talking about an incredible piece of musical theater that not only follows the plot of its source material almost  to a T, but captures the heart and soul of the story itself. That musical is The Lightning Thief: The Percy Jackson Musical.

The Lightning Thief is a Middle Grade novel by Rick Riordan, first published in 2005. Since its initial publication, the world that Riordan created has grown to include more than 15 books set in the world of our hero Percy Jackson and dozens of characters that fans of the series have fallen in love with along the way. There’s a reason why people flock back to childhood favorites like The Lightning Thief as adults, and a lot of it has to do with the heart of the story.

The Lightning Thief, a story about a young boy who goes on an epic cross-country quest to recover Zeus’s stolen lightning bolt, is an action-packed epic steeped in mythology. The book’s themes stick with us long after we’ve supposedly outgrown monsters and swordfights. Though each song in The Lightning Thief: The Percy Jackson Musical contributes to the soul and story of the show, three that capture the spirit of the characters and books stand out: “Good Kid,” “My Grand Plan” and my personal favorite, “Another Terrible Day.”

When we’re first introduced to Percy Jackson in the books, we quickly learn that things tend to go wrong for him. No matter how hard he tries, he can’t seem to fit in anywhere, or make many friends. I know that I related to this a lot as a kid, and I’m sure a lot of other people did as well. Percy’s realization that he can do heroic things and is worthy of friends is a big part of his journey throughout the book, and the song “Good Kid” encapsulates this perfectly. Throughout the song, Percy’s pain in not knowing where he’s going wrong or how to fix things is clear and palpable. “I swear I’m a good kid” is the major refrain of the song, and everything about it, from the lyrics to the vocal performance perfectly capture Percy’s struggle to figure out who he is and be the best he can.

As a smart, nerdy kid, Annabeth was always my favorite character in The Lightning Thief. For a while there, I was convinced that Athena was going to show up and claim me as her daughter, too. Annabeth is incredibly intelligent and driven, but at times, she feels invisible, too. Her song, “My Grand Plan,” is a perfect representation of who she is and how she feels about herself. In the books, Annabeth is sassy, witty and, of course, whip-smart. All of this comes through in “My Grand Plan,” especially in lyrics like “Always been a tough girl / ‘Cause most girls never win if they’re polite.” This song does in just a few lyrics what it takes some films entire scenes to do: gives us a clear idea of who Annabeth is, what she wants, and why we should root for her. Just like in the books, I know I have my money on Annabeth to save the world.

Finally, Percy Jackson and the Olympians wouldn’t be the same without lovably hateable camp counselor Dionysus, or Mr. D. From his refusal to call Percy by his correct name to his bad attitude towards just about everything, Mr. D is one of the most memorable characters in the series. “Another Terrible Day” is Mr. D’s hilarious lament that he’s stuck running a summer camp for all of the Gods’ kids, but it’s also so much more than that. In this song. We get introduced to a hilarious cast of minor characters pulled straight from the book as well as a general idea of how the camp is run. And how is it run, you may be wondering? Just like in the book! There are mentions of pegasi, archery and nymphs. The creators of The Lightning Thief: The Percy Jackson Musical didn’t shy away from the huge, crazy world they were recreating—they embraced it, and they knocked it out of the park.

It can be incredibly fulfilling to see our favorite books in other forms, whether that be movies, TV shows or musicals. However, finding a piece of art that stays as true to the source material as The Lightning Thief: The Percy Jackson Musical is rare. The Lightning Thief: The Percy Jackson Musical deserves every second of its run on Broadway, and I for one am super jealous of anyone who will get to see this spectacle in person. Best of luck to the cast and crew as they begin previews this Friday. Visit http://www.lightningthiefmusical.com for tickets and more!

Samantha Martin is Frolic's Creative Executive. She loves television, podcasts and swooning over her favorite band members.
All Posts
PrevPreviousIt Beats the Alternative
NextTrope Rec Tuesday: Get to Know These Romance Silver FoxesNext