Book of the Week: Accidentally Engaged by Farah Heron 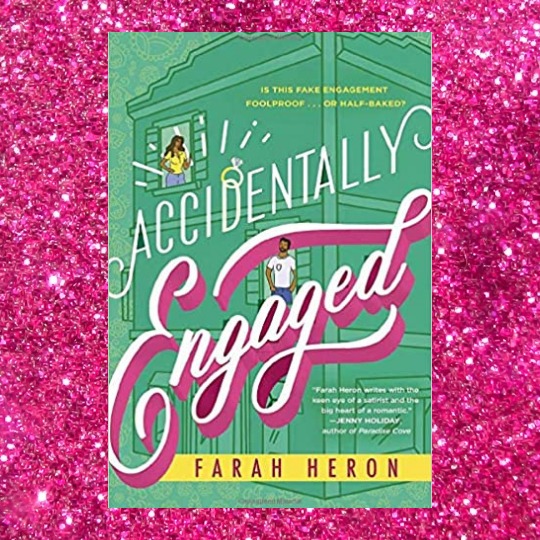 I loved this book to pieces. In Accidentally Engaged, Farah Heron has painted a complex landscape of romanticism and love characterized by subtle shades of meaning and overt humor. 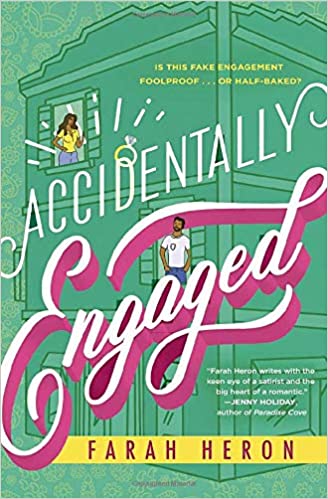 Heron draws on her own Indian Tanzanian Canadian Muslim heritage to write these wonderful characters full of heart and warmth. It is in the small, small details that you get to see this — in the dishes where the Gujarati Indian food has an East African twist, in the occasional comments about what is allowed or disallowed in Islam, in the Canadian-ness of the heroine’s outlook to life, in the longing the hero has for the beauty of Dar es Salaam and the spices of Zanzibar. Culture is not a mere backdrop to the book, but rather an intrinsic aspect of who these characters are; their story could not possibly be told by divorcing it from the culture.

Reena works in finance, a field she despises. It is a field she chose in defiance of her parents’ wishes to work in their real estate business. She wants to stand on her own two feet as far as possible. As it is, she is living in a low-rent apartment in a building her family owns, the last thing she wants to do is work for them and be completely owned by them. And yet, paradoxically, the career she chose is not one at which they would laugh. But in her heart of hearts, she wants to be a baker, a bread baker. She has already learned how to do it well, but she wants to attend an institute to learn how to be a better one.

Nadim has come to Toronto from Dar es Salaam via a graduate degree from the London School of Economics. He is blessed with a posh English accent and a well-developed body. He is easily seduced by bare feet and bread. But, and this is a big stumbling block for Reena, Nadim works for her dad and is the chosen one “from the Muslim Bachelors “R” Us warehouse” for her hand in marriage by both sets of parents.

Reena and Nadim meet when he is juggling a bike and a six-pack of beer up the stairs to his apartment just as she is leaving to go out of the apartment right opposite his. An engineered fateful meeting.

Heron cleverly crafts Reena’s personality like the bread Reena pours her soul into: crusty on top, soft on the inside, vulnerable to changes of (emotional) temperature (of the people around her). And then as the story proceeds, you see Reena emerging from the protective shell surrounding her insecurities and low self-esteem into being sturdy, durable, and complex like challah.

Heron’s depiction of Reena’s personality is a master class in parenting children. How you treat your growing children can either set them up for success in adulthood or blight their lives. As the middle child, Reena was squeezed between her overachieving, favored older brother and needy, high maintenance younger sister. Reena was often an afterthought, only to be remembered when she could be useful to the family and expected to do as she was told by her parents. Some of the parental attitudes are those of many immigrant families in terms of loyalty to the family and culture and drive for success, but some of it is just universal parenting attitudes. This upbringing sets Reena up to be uncertain and anxious, alternately defiant towards her parents and seeking their approval. Many of her life’s choices till she meets Nadim are informed by this.

Nadim is a bit of a cipher in this story since we see him filtered through Reena’s eyes. The reader gets to know her intimately and him not as directly but through her thoughts and emotions. However, his words and his actions say volumes for the person he is and what he is feeling at any given moment in the story. Compared to Reena’s prickliness and standoffishness, he is sweet and accommodating, a true “cinnamon roll” hero.

What brings Nadim and Reena together is a cooking contest reality show. They are both foodies and they make a good team with her enthusiasm for cooking and his enthusiasm for her food and for hamming it up for the camera. For the initial rounds of the reality contest, they are required to shoot videos of them crafting a meal together. They share much laughter among themselves and the reader as they luxuriate in the food and each other. Food is a metaphor for so much in human life and emotions, hopes and memories. Heron skillfully allows the magical nature of food and time to work on their friendship. And Nadim and Reena’s deep friendship is at the heart of their story. As Mary Wollstonecraft has said, “Friendship is a serious affection; the most sublime of all affections, because it is founded on principle and cemented by time.”

I alternated between enthusiasm and delight as I read this book: enthused by the craftmanship of the characters and delighted by their story. There is food and friendship, vulnerability and defenselessness, affection and aloofness, birth family and found family, betrayal and the requisite expiation. And above all, there is love and laughter.

Keira Soleore writes for the International Examiner and Cogitations & Meditations. She enjoys connecting with readers on Twitter (@keirasoleore) and through her website (www.keirasoleore.com). Her interests include medieval manuscripts, philosophy, poetry, picture books, choir, sunshine and beaches. Keira is a pseudonym.
All Posts
PrevPrevious11 Black Authors Writing Amazing LGBTQ+ Characters by Jeff Adams & Will Knauss
NextWant More Queer YA? Check Out this Excerpt from A Dark and Hollow Star by Ashley Shuttleworth!Next