Book of the Week: Ten Things I Hate About the Duke by Loretta Chase 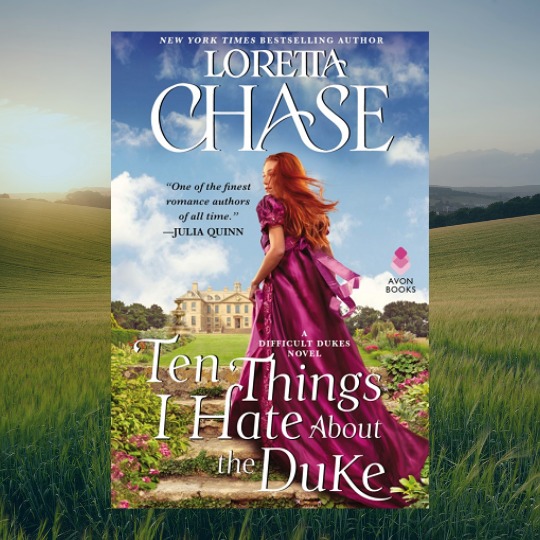 “I am outrageous. You are outrageous.” Surely, a match made in heaven. Or so he thinks. She disagrees. And therein lies the problem. 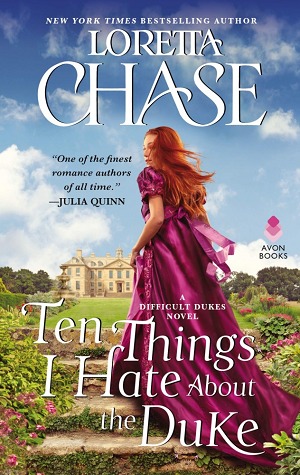 Miss Cassandra Pomfret is the eldest daughter of Lord deGriffith, the terror of Parliament. In her recent past, at her debut, she instigated more than one sensation — even had the Riot Act read to her. So her father packed her off to the Continent, only allowing her to return when it was time for her younger sister’s debut. Unfortunately for her father, no sooner had she returned, than she caused a uproar about a bill in the House of Commons, and her father becomes a laughingstock. He thus issues an ultimatum: Until she marries, her sister will not be allowed to go out to events that a debutante usually attends for her successful launch on the marriage mart. Cassandra does not want to marry and doesn’t think anyone would want to marry The Gorgon. But she does want a brilliant match for her sister. What is she to do?

Cassandra has maintained her position as one of the leaders of the Andromeda Society – those ladies interested in effecting change in society. She is not remotely interested in “proper” causes suitable for ladies, such as fêtes champêtres, genteel fairs, and other fundraising events for the poor. She wants to be at the forefront of enacting laws to lift them out of poverty.

Lucius Wilmot Beckingham, the Duke of Ashmont, also known as Luscious Lucius, is a wastrel. Oh, he is solvent and doesn’t lay waste to his estates, but otherwise, he is an unsteady fellow up to all pranks along with his close ducal friends and drinking like a fish. He does not lift a finger to help anyone (or so it seems). Not a redeemable bone in his body, according to Cassandra. He agrees that he is an arsehole and is not arsed to change an iota of his life.

She had met him in her girlhood but that meeting had made a fleeting impact on him, and eventually, she had put her girlish dreams aside and faced reality as he currently was: a hard-living libertine with a puerile sense of humor and the combative instincts of a gamecock who created chaos wherever he goes.

They meet again when he drunkenly shoots a pistol in the air to quiet a brewing brawl and accidentally frightens her horses into running away. Her precious carriage overturns and breaks up into pieces, she ends up in the ditch, and her highly respected groom ends up severely injured. She is furious and becomes further entrenched in her belief that he is wicked.

He is suitably chastened and tries to make up to her and her groom. And so begins his reformation. His first step: Ask her to marry him. She categorically refuses. Times passes, and they are caught behind the curtains where her Andromeda Society meets. He again proposes marriage. She is now in a strop knowing the inevitable is pressing upon her. She finds him disgusting. He finds her delightful. He wants her to marry him to save her reputation. She’s like, over my dead body. And yet…with him, she feels “seen” for the first time, and “respected” for her beliefs and who she is.

They will not see eye to eye, and yet marry, they must. How are they to get on?

And this was the start of the story for me. This is where the skill of an author shines. I find myself fascinated by how marriages work in fiction, how protagonists negotiate their boundaries and the inherent rules, reconcile their values, retain their self-respect, value the other person and recognize their worth, all the while knitting together a life worth living together. Chase shows us without the shadow of a doubt that Cassandra and Ashmont are meant to be together.

Like many readers of historical romances, I had been waiting for this book by Chase for many months now and am pleased with how enjoyable this story has been.

1 thought on “Book of the Week: Ten Things I Hate About the Duke by Loretta Chase”

Keira Soleore writes for the International Examiner and Cogitations & Meditations. She enjoys connecting with readers on Twitter (@keirasoleore) and through her website (www.keirasoleore.com). Her interests include medieval manuscripts, philosophy, poetry, picture books, choir, sunshine and beaches. Keira is a pseudonym.
All Posts
PrevPreviousExclusive: Bear With Me by Lucy Eden Cover Reveal And Paperback Announcement
NextHalloween Rom Com: “The Problem with Love Potions” Part FourNext