Book of the Week: The Jane Austen Society by Natalie Jenner

When I heard The Jane Austen Society billed as a book for fans of The Chilbury Ladies’ Choir and The Guernsey Literary and Potato Peel Pie Society, I knew this was a book for me. As it turns out, The Jane Austen Society is the best historical romantic fiction book I have read this year so far. Jenner writes the story of her memorable characters with deep sensitivity, great imagination, and wonderful prose. 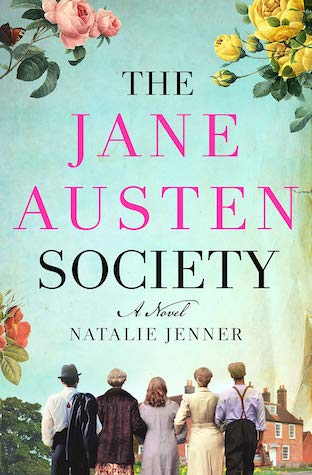 Set mainly in the 1940s, the book is about individuals from the small insular English town of Alton, who, along with a few people around the world, are brought together by their love of Jane Austen’s work. Together, they form a society for the preservation of all things Austen, including her cherished former home in the village of Chawton near Alton in Hampshire. And in so preserving Austen’s legacy, they find hope, love and solace in their own lives, which have been overlooked by society and undervalued by themselves.

I said above that I found her characters memorable, and that is because Jenner’s writing elevates ordinary characters and their ordinary lives to extraordinary definition. In many ways, this is reflective of Austen’s own writing and psychologically-apt observations.

Living in the shadow of Austen’s home, these people love her books — identify with her characters more than their neighbors sometimes — and regularly quote from them. One of the joys of this book is the perceptive analysis of Austen’s novels as the characters freely discuss them while conversing with each other. Some of the subplots and scenes even have Austenesque stories embedded in them. The delight in reading this book was their discovery. And yet, The Jane Austen Society is not a derivative book by any means. It stands alone on its merits as an engrossing story well told.

James Knight is the head of the Knight estate that owns the cottage and a stately manor house. His daughter, Frances, is the last of the line, having remained unmarried well into her 40s now. As a young woman, she and her father’s lawyer had had romantic inclinations that were squashed by her bitter father as being unworthy of the Knight name. She now considers herself as a reclusive spinster going into a decline, a vast departure from the sparkle and smiles of her youth. With the estate entailed to the closest male relative, after her father’s death, Frances will be dispossessed because her father has made no provision for her.

Bold, independent and beautiful, Adeline is a former schoolteacher, who is now pregnant and widowed, because her husband recently died in combat in the war. She is in a desperate situation with no job and a baby on the way. The deeply empathetic village physician, Dr. Gray, is a widower himself. He continues to be wracked with guilt over the death of his wife whom he could not save. Adeline and Dr. Gray are attracted to each other, but neither is emotionally ready to take the steps necessary to form a relationship. Their loneliness and desperation, instead of drawing them closer, pushes them apart, and the illicit danger of addiction hover over them.

Young Evie, Adeline’s prize pupil, is forced to give up her scholarly dreams to become a housemaid for the Knights. Outside her regular duties and under the guise of ostensibly cleaning the thousands of books in their library, she has been secretly cataloging every book and has made some priceless Austen discoveries.

Adam is perhaps the one for whom I felt the most urgent need for something good in his life. He is under the thumb of his dominant mother. After the death of his father and older brothers, he gives up his dreams of an independent life away from home to work the estate farm and live at home. The only escape he has from his humdrum life are the Austen stories he is introduced to by a visiting American fan, who he feels is so beyond him in her beauty as to be almost otherworldly.

Mimi, is a Hollywood actress in her thirties, whose star is in descendance and is about to be dropped by her studio manager who turns out to be quite the lecher. There is Jack, in whom she finds the balm her soul needs. They have many ties binding each other — Austen being a big one.

And so there you have it: the main cast of characters. As the story progresses, each thread of the tale unfolds and the people’s lives become inexorably intertwined. Secrets, mysteries, disagreements, gossip, love, regret, yearning…all take center stage.

I read this book in print and then listened to the audio, which is narrated by British actor Richard Armitage. (Yes, THAT Armitage of the yummy voice.) As you expect, the audio reading is fantastic. Armitage really makes Jenner’s characters come to life in all their idiosyncrasies and passions and complexities.

After having read this book, I now dearly hope to someday visit the real-life museum that preserves Austen’s cottage in Chawton and bask in all things Jane. I plan to be that tourist intrepidly tripping around Chawton, poking in shops and nosily asking questions of the villagers. Who knows who I might meet up with or what I might find?!

A quick note: Jenner’s book is not the true story of the real Jane Austen Society’s founding, but it is a wonderful fictive version that you wish were true as well.

Keira Soleore writes for the International Examiner and Cogitations & Meditations. She enjoys connecting with readers on Twitter (@keirasoleore) and through her website (www.keirasoleore.com). Her interests include medieval manuscripts, philosophy, poetry, picture books, choir, sunshine and beaches. Keira is a pseudonym.
All Posts
PrevPreviousHelp! I’ve Fallen Into a Fandom
NextDaily Frolic: Netflix’s July Lineup!Next