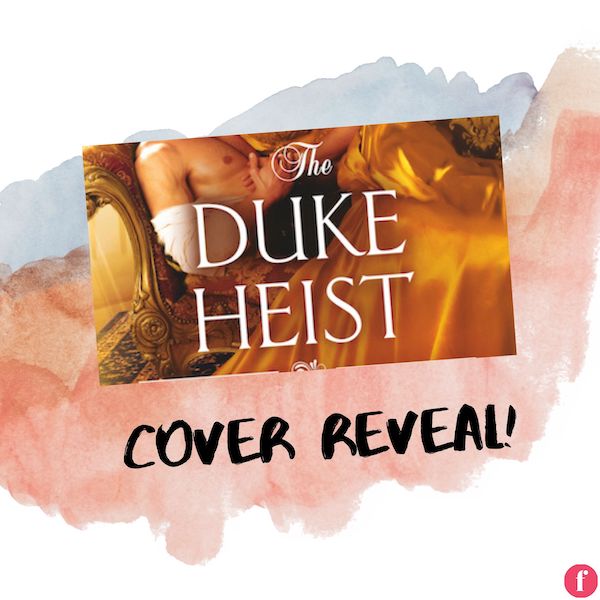 We are so excited to bring you the cover reveal and exclusive excerpt for The Duke Heist by Erica Ridley, out February 9, 2021!

Erica is also offering a free bonus novella to readers who pre-order The Duke Heist. All the info can be found here: https://www.ericaridley.com/preorder/. 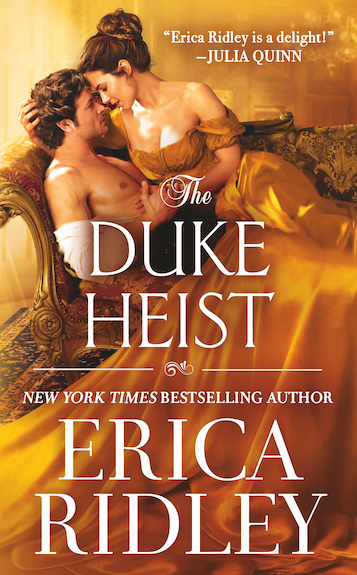 About The Duke Heist:

Chloe Wynchester is completely forgettable — a curse that gives her the ability to blend into any crowd. When the only father she’s ever known makes a dying wish for his adopted family of orphans to recover a missing painting, she’s the first one her siblings turn to for stealing it back. No one expects that in doing so, she’ll also abduct a handsome duke.

Lawrence Gosling, the Duke of Faircliffe, is tortured by his father’s mistakes. To repair his estate’s ruined reputation, he must wed a highborn heiress. Yet when he finds himself in a carriage being driven hell-for-leather down the cobblestone streets of London by a beautiful woman who refuses to heed his commands, he fears his heart is hers. But how can he sacrifice his family’s legacy to follow true love?

Chloe folded her hands in her lap and did her best not to glare a hole right through the handsome, haughty Duke of Faircliffe. His frigid blue gaze had looked right at her—and slid away just as quickly, having glimpsed nothing to attract his interest.

How many times had she and Faircliffe been in the same room? Eight? Ten? Every disdainful glance in her direction as indifferent as the last. She lifted her chin. Her father had taught her that to the right person, she would be visible and memorable. Faircliffe was clearly the wrong person.

Not that she wanted him to notice her, Chloe reminded herself. The continued success of “Jane Brown” hinged on her uncanny ability to be wholly unremarkable under any circumstances. She gripped the soft muslin of her skirt and took in all the other ladies in the parlor.

Mrs. York clapped her hands together. “And now… a celebratory tea!”

The duke’s face displayed a comical look of alarm. “I don’t think—”

“You must join us!” Mrs. York’s hands flapped like frightened birds. “The girls were about to have oatcakes and cucumber sandwiches before you arrived.”

“We were about to discuss epistolary structure in eighteenth-century French novels,” Philippa murmured.

“I never meant to interrupt,” Faircliffe said with haste. “I mustn’t stay, and in fact—”

“Nonsense! Come, come, all of you.” Mrs. York waved her arms about the room, driving her guests into the dining room like a shepherd herding sheep.

Chloe and Faircliffe were both caught in the flow.

Once they reached the door, however, Chloe stepped to one side. She could not take a seat at the table, or she would be stuck there for the next hour.

While everyone else was occupied, this was her chance to liberate the painting. But first, she needed an excuse to disappear. An adorable, furry reason.

She released Tiglet from the large wicker basket. The calico kitten darted between boots and beneath petticoats with a formidable rawr.

Tiglet scaled several curtains in search of an open window before darting out of the dining room and flying off down the corridor as though his tail were afire.

Chloe gasped, as if shocked that her homing kitten was attempting to dash home. “How embarrassing! I’ll run and find the naughty little scamp at once. Go on ahead. Please don’t wait for me.”

With her basket hanging from her arm, she ducked into the parlor and closed the door behind her. She hurried to lift the painting from the wall and carried it behind a chinoiserie folding screen in the corner. Up came the frame’s grips, off came the backing, out came Bean’s painting. She rolled it carefully and tucked it into the basket before stretching the forgery she’d brought over the wooden frame.

She ran to open the parlor door before anyone noticed it had been shut and hurried past the dining room to the front door without taking her leave from the guests. Would anyone notice she failed to return? Doubtful. If anything, the ladies would assume Jane Brown had slunk off in mortification.

Still, there was no time to waste. Any caper’s success depended upon a timely exit.

Keeping her head down, she headed down the front walk toward the first carriage in the queue. Only when she glimpsed the red curtains and a pair of leather gloves on the box did she lift her head toward the driver’s perch.

Her lungs caught. Where was Graham?

Distant shouts reached her ears, and her tight muscles relaxed. Something unexpected must have occurred, and her siblings’ distraction was underway.

This was her cue to flee.

Chloe pushed the basket inside, unhooked the carriage from its post, and leapt onto the coachman’s seat. Female drivers weren’t unheard of, but all the same, she was glad she never went outside without garbing herself in the plainest, dullest, dowdiest clothes in her wardrobe. No one who glanced her way would bother looking for long.

She set the horses on a swift path out of Mayfair.

Only when Grosvenor Square was no longer visible behind her did she allow herself a small smile of victory.

“Did we escape?” came a low, velvet voice from within the carriage.

Chloe’s skin went cold. Who was that? Graham wouldn’t be hiding in the back of the carriage. A stranger was in the coach! She twisted about and wrenched the privacy curtain to one side.

A handsome visage with soft brown hair and sculpted cheekbones stared back at her, glacial blue eyes wide with surprise.

“Faircliffe?” she blurted in disbelief.

“Miss… er… you?” he spluttered when he found his voice. “What the devil are you doing driving my carriage?” 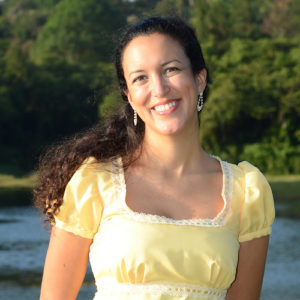 Erica Ridley is a New York Times and USA Today bestselling author of historical romance novels. When not reading or writing romances, Erica can be found riding camels in Africa, zip-lining through rain forests in Costa Rica, or getting hopelessly lost in the middle of Budapest.

To find out more, visit:

Where Romance and Pop Culture Live Happily Ever After.
All Posts
PrevPreviousJ. Kenner Writes…A Letter to My Graduate
NextDaily Frolic: The Love, Victor Trailer is AdorableNext