Exclusive: Excerpt of Angel in a Devil’s Arms by Julie Anne Long 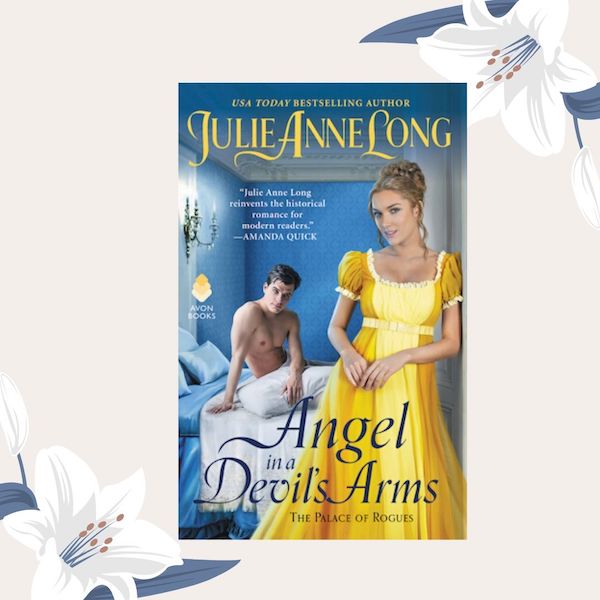 Angel in a Devil’s Arms is the second book in Julie Anne Long’s well-acclaimed Palace of Rogues series. Long’s books have consistently been a favorite of historical romance readers, and this book promises to be no different.

About Angel in a Devil’s Arms:

He has devil’s blood in his veins. At least, that’s always been the legend. How else could the Duke of Brexford’s notorious bastard son return from the dead? The brutal decade since Lucien Durand, Lord Bolt, allegedly drowned in the Thames forged him into a man who always gets what — and who — he wants. And what he wants is vengeance for his stolen birthright…and one wild night in Angelique Breedlove’s bed.

Angelique recognizes heartbreak when the enigmatic Lord Bolt walks into The Grand Palace on the Thames, and not even his devastating charm can tempt her to risk her own ever again. One scorching kiss drives home the danger.

But in the space between them springs a trust that feels anything but safe. And the passion — explosive, consuming — that drives Lucien to his knees. Now his whole life depends on proving his love to a woman who doesn’t believe in it…because his true birthright, he now knows, is guardian of Angelique Breedlove’s heart. 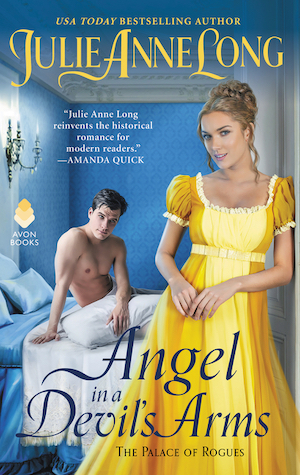 He left Cuttweiler by the river with the grimly cheery warning: “I’ll be in touch to let you know how you can make it up to me, Cutty. I’m back in London for good now. Don’t even think about contacting the duchess, because I’ll now.”

Because Cutty deserved to have his day thoroughly ruined, at the very least.

Cutty vowed his behavior would be faultless. He seemed resigned to some sort of restitution.

Lucien had just pulled one glove off with a sort of violence, as if it were the very source of the dark mood clinging like a film to him, when came upon Mrs. Breedlove standing at the window nearest the landing, clutching the parted curtain in one hand.

He was yanked up short, as though his senses were a team of restive horses.

The afternoon sun poured amber over her. Her expression was so wistful, so very nearly dreamy, that she almost looked like a watercolor of Angelique Breedlove rather than a flesh and blood woman. She was, in fact, so far away in her thoughts she hadn’t yet sensed his presence.

Of whom or what was she thinking?

A rogue, irrational emotion surged through him: He wanted it to be him.

In fact, if he’d been given his choice of additional powers in that moment—flight, or invisibility, or the ability to turn back time so that he’d never been thrown into the Thames—for just that moment, he’d choose the power to put that expression on her face.

He remained motionless, one glove off, one on, one foot on the landing, one on the stairs. His breath was held. The part of him still convinced everything of beauty or grace would be whisked from him froze him in place.

She dropped the curtain and whirled about.

She couldn’t quite manage to get her guard up in time and he saw what was beneath her reserve: a sort of wild joy and heat.

He couldn’t help it: he moved toward it as he would toward a chink of light in a cell.

He was grateful he’d gotten that one glove off, because the next moments were filled with shocking little pleasures: her satiny cheek against his bare hand, the warmth of her head tipping into his palm, the silk of her hair as he threaded his fingers through it and tugged gently back. She was rigid with surprise for about a heartbeat.

In the next he saw her eyes go hazy and dark just before they closed, just before his mouth touched hers.

Oh God. That first taste of her hit his bloodstream like opium and his breath left him. The give of her lips opening beneath his, the sweetness and satiny heat, the hunger the equal of his, the soft surrender of her body melting against his. He groaned low in in his throat as

Her arms looped around up and he rotated the two of them until her back was at the wall and they fell against it.  He slid his hands down to cup her arse and pressed her up against his hardening cock and the sound she made in her throat, a tiny cracked, nearly stunned moan of pleasure, made him wild. The shifted to move against him; she threaded her fingers up through his hair and like that, for moments or drugging, glorious eons, that kiss went dangerously carnal.

He kissed her as though her bare legs were already hooked over his shoulders and a mattress was squeaking beneath them. He was tempted to furl her dress and yank open his trouser buttons and he thought for an instant, yes, yes we can do this in twenty seconds, so what if someone comes upon us.

It needed to stop.

And as if she’d had the same thought at the same time, somehow, tacitly, through some effort of will he didn’t know he possessed, is what they did. He lifted his mouth from hers. It felt like a sundering. His senses were furious at the end of this riot of pleasure. His every cell seemed to protest.

He was torn between leaving his eyes closed, just to linger in the spinning world of that kiss, and opening them to see what kissing him had done to her.

She cleared her throat.

“You should not have done that.”

For an instant the words almost didn’t register. For it seemed the only logical sentence after that kiss was, “my room or yours?”

Her voice was frayed velvet. Her tone was even. Almost regretful.

She looked up at him. Warily. Curiously. Perhaps wondering what her kiss had done to him. Her eyes were still hazy.

He hesitated. He wasn’t quite certain what he wanted to do with those words.

“But it was good.” He said it carefully. It was both a statement and a question. He was startled to hear his own voice was a husk. As if he was waking from a long, long sleep. A wholly inadequate word. Good.

There was a little silence.

She slipped out of his arms and away from him to a distance just behind reach.

It was fairly clear there was no safe distance for either of them.

At last she drew in a long, shuddering breath. Which was gratifying answer enough. But then her chin dipped twice in a rueful nod. And that was even better.

And it was all she said.

Nevertheless was not a reason. 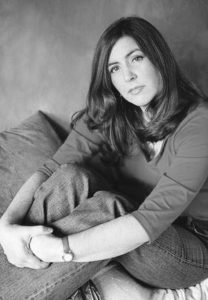 USA Today bestselling author Julie Anne Long originally set out to be a rock star when she grew up (and she has the guitars and fringed clothing stuffed in the back of her closet to prove it), but writing was always her first love. Since hanging up her guitar for the computer keyboard, her books frequently top reader and critic polls and have been nominated for numerous awards, including the RITA, Romantic Times Reviewer’s Choice, and The Quills, and reviewers have been known to use words like “dazzling,” “brilliant” and “impossible to put down” when describing them. Julie lives in Northern California. Find Julie Here: http://www.julieannelong.com/

Keira Soleore writes for the International Examiner and Cogitations & Meditations. She enjoys connecting with readers on Twitter (@keirasoleore) and through her website (www.keirasoleore.com). Her interests include medieval manuscripts, philosophy, poetry, picture books, choir, sunshine and beaches. Keira is a pseudonym.
All Posts
PrevPreviousExclusive: Cover Reveal and Meet-Cute Excerpt of Island Affair by Priscilla Oliveras
NextWhy We Need The Return of the Gothic Romance with Maria Perez CuervoNext