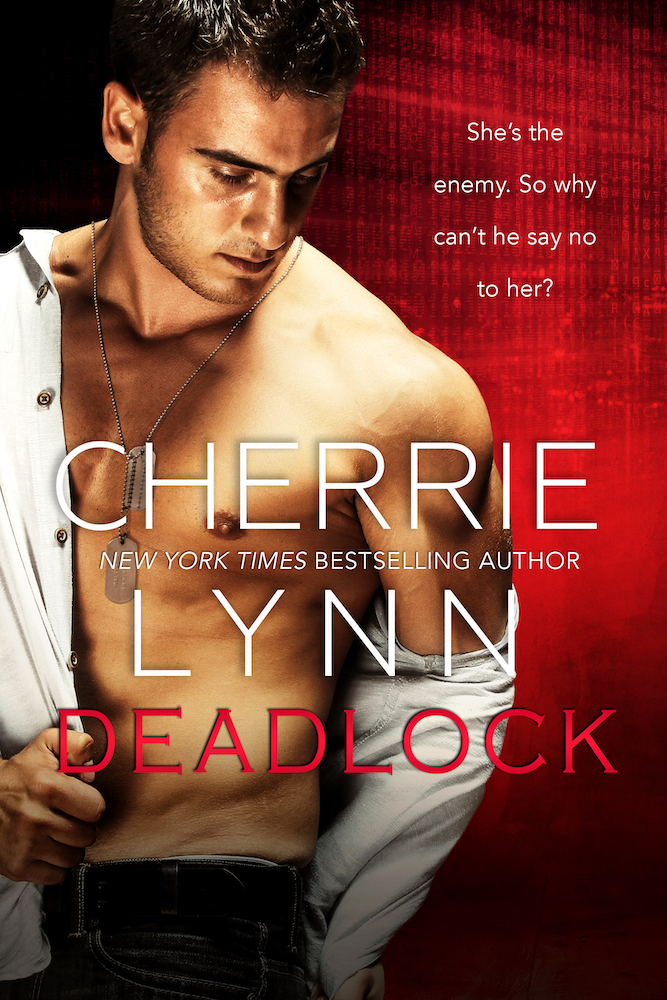 This exclusive excerpt, from Deadlock by Cherrie Lynn, is being shared as part of Entangled Publishing’s online Scavenger hunt! Check out Entangled’s Facebook page to start at the beginning. Collect the clues listed at the end of each post and follow the link to the next stop. If you collect all the clues, you’ll be entered to win great prizes! And keep an eye out for hidden prizes.

“Maybe.” He stood and followed as she led him to the next door down, taking note that her hair was quite remarkable in this muted light, the paler individual strands catching what illumination there was and sparkling. The scent she left in her wake, that soft floral essence… He wished he weren’t so ignorant about such things. Was it lilac? It fit her, somehow. Whatever it was, he liked to think that if he came across that particular flower at some point in the future, it would immediately remind him of her.

“I’m afraid you’re going to be disappointed,” she said as she opened the door in front of them and flipped on the light.

He was anything but. Lena’s room had been sparse, but Lindsey’s looked as if someone still lived here. No machines he could snoop through, but it had the personality that had been lacking in her twin’s room. A whimsical canopy still hung over the bed. The drapes were airy, the bed piled with fluffy pillows. It was the room of someone who wanted beautiful things around her.

“This is the house you grew up in, right?” he asked, turning to look at her from the center of the room. She still stood near the door, for some reason looking as if she wanted to bolt.

She really didn’t know how lucky she was. Or maybe she did, but in his experience, most people who had grown up in a stable home didn’t. They always had something to whine about. All he had ever wanted was parents who gave a fuck. At the same time, he wondered if he would’ve worked as hard trying to make something of himself.

“You know, you shouldn’t be so hard on your mom and dad for only wanting to see you happy,” he told her.

That brought her gaze up to meet his. He could clearly see she wanted to argue but maybe thought better of it when she reflected on what she knew of his history. What little she knew. Drawing a breath, she gave a nod. “Maybe you’re right.”

“I am. They obviously love you very much.”

“So…you…I mean, I have questions. But I don’t know if I should ask them.”

“You can ask.” He shrugged. “I might even answer.”

“How old were you when you were removed from your home?”

“Yeah. They voluntarily terminated their rights. Didn’t try to get me back at all.”

“I know you told me to save my sympathy, and I will. It’s only that I find it so hard to believe they didn’t see what a brilliant kid they had.”

“I guess it’s hard when you’re high or drunk all the time. And I admit, I was difficult.”

“Well, of course you were,” she said as if it should be patently obvious, and he noticed it wasn’t only her hair that collected the light beautifully but her green eyes, too. Those impossibly deep, understanding, green, green eyes.

Dude. Stop. Last time you got caught up in eyes like those, you lost your fucking soul.

They had been staring from a completely different mind, though. A different personality, a different set of intentions.

“Did you ever come close to being adopted?”

“No, not really. People looking to adopt want cute babies and toddlers. Impressionable kids they can make their own. Hardly anyone wants a troubled little shit. I’m sure people who would are out there, and I’m sure many of them have good intentions, but I was never interested. I learned to make my own way. I liked it like that.”

“I would imagine, given your particular skill set… I mean, have you…?”

“Have I looked up my parents?”

“No. Not once. Never. I have no idea if they’re dead or alive. I don’t care.” They hadn’t even come to any visitations child services wanted to set up. They hadn’t been interested in counseling or parenting classes. Some of his fucking caseworkers had been more motherly than his own mom. But the agency had a lot of turnover, and no one had stayed in his life for very long. “My mom and dad gave up on me, so I gave up on them.”

“Wow,” she said softly. She crossed her arms over her midsection, almost as if she were hugging herself, as if the very thought caused her to need comfort. He rubbed at the back of his neck, glancing around at the warmth and safety of her childhood bedroom.

Clue to collect: Where is Jace originally from? 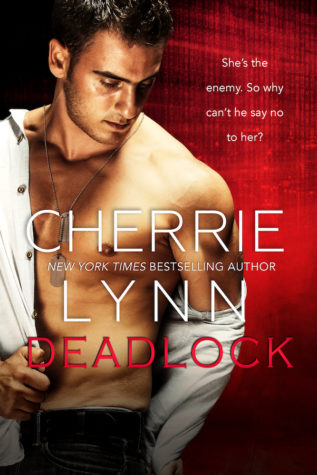 Discover New York Times bestselling author Cherrie Lynn’s Deadlock, featuring a team of elite military hackers who will do whatever it takes to protect their country and the women who enter their dark and dangerous world.

Ex–Air Force hacker Jace Adams is the best at what he does. There isn’t a system he can’t infiltrate or a country his team can’t topple. But when he finds Lena Morris, the woman he hates most in the world, on his doorstep, the last thing he wants to do is help her. Or is it really Lena?

Lindsey Morris can’t believe her twin sister, Lena, is missing, with only a cryptic text to find the man Lena once betrayed. But as easy as Jace is to look at, getting him to agree to help her find her sister is a lot harder. He refuses to put his team at risk, until they find out the enemy they’re facing may be one they have in common…

As Lindsey and Jace race against the clock to save her sister, their shaky truce begins to morph into a fire they can’t control. But their lack of trust might be exactly what gets them killed.

Where Romance and Pop Culture Live Happily Ever After.
All Posts
PrevPreviousExclusive: New Cover Reveal for Buried Alive by Stacey Marie Brown
NextHi, My Name is Magan Vernon and I’m Obsessed With Secrets of Great British CastlesNext