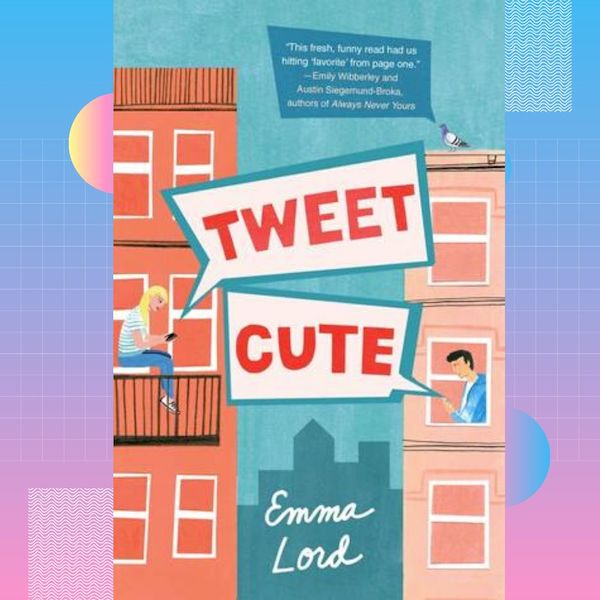 I am excited to bring this fresh and fun rom-com from debut author Emma Lord about the chances we take, the paths life can lead us on and how love can be found in the opposite place you expected.  -Keira

Enter Jack: class clown and constant thorn in Pepper’s side. When he isn’t trying to duck out of his obscenely popular twin’s shadow, he’s busy working in his family’s deli. His relationship with the business that holds his future might be love/hate, but when Big League Burger steals his grandma’s iconic grilled cheese recipe, he’ll do whatever it takes to take them down, one tweet at a time.

All’s fair in love and cheese — that is, until Pepper and Jack’s spat turns into a viral Twitter war. Little do they know, while they’re publicly duking it out with snarky memes and retweet battles, they’re also falling for each other in real life — on an anonymous chat app Jack has built.

As their relationship deepens and their online shenanigans escalate — people on the internet are shipping them — their battle gets more and more personal, until even these two rivals can’t ignore they were destined for the most unexpected, awkward, all-the-feels romance that neither of them expected.

I manage to calm myself down to non-Hulk levels by the time I reach the 6 train platform, leaving a good twenty minutes after Ethan. The only silver lining to all this bullshit is that Grandma Belly, at least, probably won’t see it — I’m pretty sure she’s never even opened Twitter before. At eighty-five, she’s not exactly a huge fan of the internet.

But then again, that might be changing. She’s been winding down a bit — going on shorter walks, going to more doctor’s appointments. But it’s one of those things we seem to sweep under the counter like the deli’s finances, or what exactly is going to happen when my parents want to retire — as long as nobody actually says that Grandma Belly’s health is waning, we can all act like it isn’t happening.

My phone buzzes in my hands, pulling me out of the tangle of my thoughts. I open the Weazel app, trying not to smile too obviously on the platform when I read the message waiting for me.

I don’t speak zombie. Did that mean you finished your essay?

“Essay” is certainly a word for it. Whether it will compete against the ghostwriter Shane Anderson’s mom hired is another issue entirely

The 6 train rolls into the station, and I shove my phone into my pocket, Bluebird along with it. She’s been doing this lately — this game of elimination. Not that it helps much that she’s eliminating a guy in our class who has fewer brain cells than fingers, because even if she were massively catfishing me, I’m pretty sure it’s not Anderson on the other end. Bluebird’s too quick-witted for that. (The ghostwriter Anderson’s mom hired, on the other hand…)

Maybe I should know who she is even without the hints. I barely ever interact on the Hallway Chat, where all the users can post and stay anonymous, and I never initiate any chats with people who do. But at one point I posted a link to a free SAT test prep book online, which was met with a resounding silence from my peers and their $200-an-hour tutors — that is, until about an hour later, a private chat came from Bluebird. It was a picture of The Rock mid-flex at the gym, and a text that read: Me after devouring all that sweet, sweet Protein Punch — a reference to one of the first math prep questions about a fictional protein company whose products came in powdered and liquid form.

Her profile said she was a girl and she was a senior, so that was initially all I knew. That, and she wasn’t chugging so much Stone Hall Kool-Aid that she was above using free test resources. Still, even after all we’ve talked since — first making dumb jokes about the test prep questions, then our teachers, and sometimes things way beyond school — nothing really seems to narrow it down. I can’t think of a single girl at our school who she might be.

Which, to be fair, might not be so difficult a feat if I paid attention to something other than the dive team and my phone every once in a while.

The truly weird thing about this is that I could just blow the whole thing wide open right now. I have access to the emails attached to the different usernames, for one thing. But I’ve never looked, and it feels like cheating somehow to check on Bluebird’s. Like it would wreck it a little bit in some way because I’d feel like a liar. Like I’d pulled one over on her. I’d rather us just stay on level ground.

But I guess I already have pulled one over on her. Technically, the app should have given away our identities weeks ago. That’s the whole point of the name — Weazel, for “Pop! Goes the Weasel” (not the most clever reference, but it was three in the morning when I patented it). But I messed with the code and stopped it from happening between us for reasons I’m still not entirely sure of. Maybe it’s just nice to have someone to talk to who gets it —  the whole fish-out-of-water thing. At least, nice to talk to someone who doesn’t have the exact same stupid face as me.

Maybe it’s just nice to finally be honest with someone at all. Ethan’s all too willing to pretend we’re as well-off as our peers, but I can’t separate School Jack and Home Jack the way Ethan does — or at least not as easily. It feels like it takes up way too much space in my brain, trying to make myself fit, but when I’m talking to Bluebird, I never have to switch between the two. I just am.

Emma Lord is a digital media editor and writer living in New York City, where she spends whatever time she isn’t writing either running or belting show tunes in community theater. She graduated from the University of Virginia with a major in psychology and a minor in how to tilt your computer screen so nobody will notice you updating your fan fiction from the back row. She was raised on glitter, grilled cheese and a whole lot of love. Her sun sign is Hufflepuff, but she is a Gryffindor rising.

Where to Find Emma:

Keira Soleore writes for the International Examiner and Cogitations & Meditations. She enjoys connecting with readers on Twitter (@keirasoleore) and through her website (www.keirasoleore.com). Her interests include medieval manuscripts, philosophy, poetry, picture books, choir, sunshine and beaches. Keira is a pseudonym.
All Posts
PrevPreviousThis Week’s Entertainment will Exceed Your Expectations!
NextStyle Guide: Ready Player One!Next