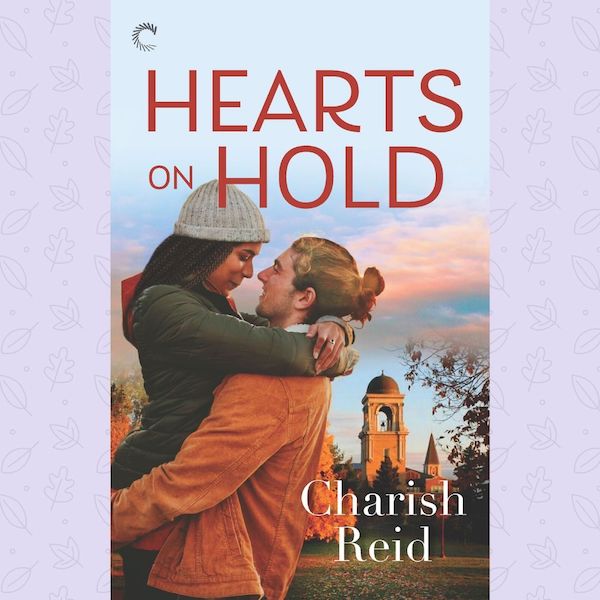 I enjoyed Charish Reid’s first book, The Write Escape, and after reading the excerpt of Hearts on Hold, I am looking forward to her second book. –Keira

Hearts on Hold features a professor and a librarian who engage in a short affair while working together on a university project. Dr. Victoria Reese isn’t expecting to catch feelings during this three-week tryst. She’s just looking for a release from the stressors of teaching at a predominantly white university with nosy administrators and of her overbearing mother. Her secret lover, John Donovan, has his own share of stressors: managing the children’s department of The Farmingdale Library and caring for a cheeky 12-year-old niece. Working with the tightly-wound, schedule-obsessed professor sounds like a challenge for a man who has ADD and tries to live a laidback life. But there’s something about Victoria and her overdue paperback romance that intrigues John, and he’s always up for a sexy challenge. In this excerpt, John proposes a “sordid affair” on the first night of their joint university project.

“I don’t usually engage in sordid affairs,” he whispered. “But I’m painfully curious about a well-organized, extremely professional woman who’s so buttoned up that she might pass out from suffocation.” So he can hear sense my labored breathing. “I want to know why she’s in love with a rakish duke. He is a rake, right?”

“Pretty much,” she said with a shaky voice. “He’s reformed by the end of the book though.” He was close enough to kiss, if she wanted, but she wasn’t sure if she should. She wanted to do something, anything to break up the unbearable tension that made her breasts heavy with anticipation and set her skin on fire. “He’d probably try to kiss a woman in a library before asking about a sordid affair though.”

A wide grin spread over John’s face. “Is that a fact?” He nodded thoughtfully before adding. “I probably should have kissed you first, huh?”

She tried to give an easy shrug. “I mean, I’m just telling you what the duke would have done…but yeah.”

John straightened up to full height. “Gotcha, so I put the cart before the horse?”

He nodded again. “Like I said, I’m new to sordid affairs. But I don’t think I’m going to kiss you right now.”

Victoria hoped she hid her disappointment well enough because the trap door beneath her heart swung open, spilling its contents downward. “No?”

He shook his head. “No, Dr. Reese. I realize my mouth ran away from me, but I can’t go kissing women in the stacks. You’d have to meet me halfway.”

Her heart pulled itself back up her chest as she parsed his words for meaning. “Halfway?”

“If you’re interested in something remotely impulsive, you’re free to kiss me. If not, we’ll go back to shelving and I’ll keep my books to myself.”

Impulsive? He didn’t know her at all. And those who did, would tell him that Victoria Reese did nothing on impulse. Victoria Reese always had a plan. But his choices were intriguing. He quietly gave her control of the situation even when her arousal was anything but controlled. Could she go back to shelving his books without remembering his scent? It’s a G.D. birch forest on a hot summer day.

“Okay, what?” Wicked humor danced in his eyes.

She shut her eyes tight and closed the distance. She pressed her mouth tightly against his and clutched his rock-hard biceps in an attempt to hold on to something. His beard tickled her lips and cheeks as she blindly pushed forward. For his part, John held onto the shelves behind her, in an attempt to let her continue “meeting him halfway.” Victoria pulled away, breathless from a dry kiss and feeling idiotic. “I don’t know why I did that,” she said breathing hard.

John raised a brow. “Did what?”

“I just kissed you.”

Victoria scoffed right back. How dare he tell me what a rakish kiss involves. “I don’t know you like that.”

“But that’s the point of impulsive kissing,” John said drawing away from her. “You give way to emotion and cast aside inhibitions. Like the movies.”

He did have a point. A closed-lip kiss wasn’t exactly a proper ravishing, but his options threw her off kilter. This wasn’t part of tonight’s plan. She had no way to prepare for such a moment. “That’s fair,” she said, and added. “Maybe I should try again.”

“I certainly wouldn’t stop you,” he purred, returning to her intimate space. “Whenever you’re ready.”

This is bizarre…and exciting. It was a fantasy Victoria had cultivated in her mind for years; meeting a man in the stacks and making out with him until an elderly librarian cleared her throat. She just never expected to act it out in her 30s, during a charade like “let me train you in the art of shelving history books.” Placing her hands on his biceps again, she leaned forward. Victoria kept her eyes open this time, staring into John’s smoldering emerald gaze. “I’m ready,” she whispered.

She started with a light peck against the seam of his closed lips, flicking a nervous tongue against his bottom lip. When she felt it appropriate, Victoria let her eyes fall shut and angled her face against his beard, easing her tongue past his barrier. A groan escaped his throat as he opened his mouth and allowed her entry. She raised herself on her tiptoes in an effort to reach him, possibly stand over him, and opened her mouth wider. Hanging on to his muscular arms wasn’t enough for her, so her hands traveled over his shoulders and gripped the back of his neck. His tongue met with hers and slid against it slowly. So achingly slow were his movements as his hands left the shelves and fell on her hips.

Hair fell away from his bun as she dug her fingers into his scalp. Chest to chest, they stood interlocked, arms wrapped around each other. Her breasts strained against the hard muscles of his torso, pushing with insistence. He dipped his head and gently pulled her bottom lip between his teeth. Victoria wanted more and she wanted it now. She almost didn’t hear the moans coming from her. She hadn’t moaned like that in a long time. Waves crashed against her beach and she hadn’t battened down the hatches for this incoming storm. A single kiss had wet the juncture at her thighs and sent her swaying from its pleasure. When John’s mouth tore away from hers, his lips traveled down her jaw and found their way to her neck. He sucked and nibbled at the sensitive skin at her pulse. “Johnny,” she breathed.

He let out a choked moan in response and licked her collarbone. “Victoria,” he whispered as he nuzzled her neck. A flat tongue lathed against her hot skin before suctioning it with a satisfying pop. That’s going to leave a mark.

Victoria’s eyes sprang open and she pushed him away. “Oh my god,” she said. Her questions and concerns quickly came back, shoving away pleasure and impulsivity.

John stepped back, chest heaving and his shoulder length hair disheveled, his lips stained red with her lipstick. “Sorry,” he breathed.

“Nothing to be sorry for,” she said reaching upward to push her braids behind her shoulder. “I initiated that.”

“Right,” he said retying his hair into a more secure bun behind his head.

Victoria wanted to reach out and yank it loose. “You have a phone call.”

“You have lipstick on your mouth.”

Victoria grabbed her pile of books. “And I think I should go.”

John stepped in front of her quick escape. “Victoria, wait.”

She held the books at her chest like a protective shield. “What?”

“If you have to leave now, please come back tomorrow night.”

She shook her head. “I’m busy all week. I’ve got a million meetings.”

His face was flushed and his expression was hopeful. Victoria found herself wanting to keep him hopeful. She wanted to be hopeful even if it meant being foolish and impulsive. Their kiss was only a taste of what could be even sweeter if she allowed herself to try. She relented. “Same time?”

About Hearts on Hold:

Professor Victoria Reese knows an uphill battle when she sees one. Convincing her narrow-minded colleagues at the elite Pembroke University to back a partnership with the local library is a fight she saw coming and already has a plan for. What she didn’t see coming? The wildly hot librarian who makes it clear books aren’t the only thing he’d like to handle.

When a tightly wound, sexy-as-hell professor proposes a partnership between his library and her university, children’s department head John Donovan is all for it. He knows his tattoos and easygoing attitude aren’t quite what she expected, but the unmistakable heat between them is difficult to resist.

And then there’s the intriguing late fee on her record. For the Duke’s Convenience…a late fee for a sexy romance novel? There’s more to Dr. Reese than she’s letting on.

John might like to tease her about her late fee, but when he teases her in other ways, Victoria is helpless to resist. Mixing business with pleasure — and oh, it is pleasure — always comes with risks, but maybe a little casual fun between the sheets is just what Victoria needs.

Charish Reid is a fan of sexy books and disaster films. When she’s not grading papers or prepping lessons for college freshmen, she enjoys writing romances that celebrate quirky black women who deserve HEAs. Charish currently lives in Sweden, with her husband, avoiding most forms of exercise.

Where to Find Charish:

Keira Soleore writes for the International Examiner and Cogitations & Meditations. She enjoys connecting with readers on Twitter (@keirasoleore) and through her website (www.keirasoleore.com). Her interests include medieval manuscripts, philosophy, poetry, picture books, choir, sunshine and beaches. Keira is a pseudonym.
All Posts
PrevPreviousDaily Frolic: Read Romance for a Cause with the Romance for PR Auction!
NextDawson’s Creek Book BingoNext