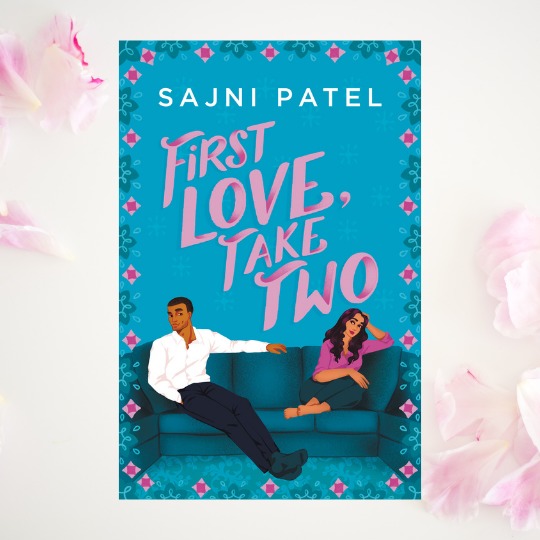 We are so excited to bring you this exclusive excerpt from First Love, Take Two by Sajni Patel! 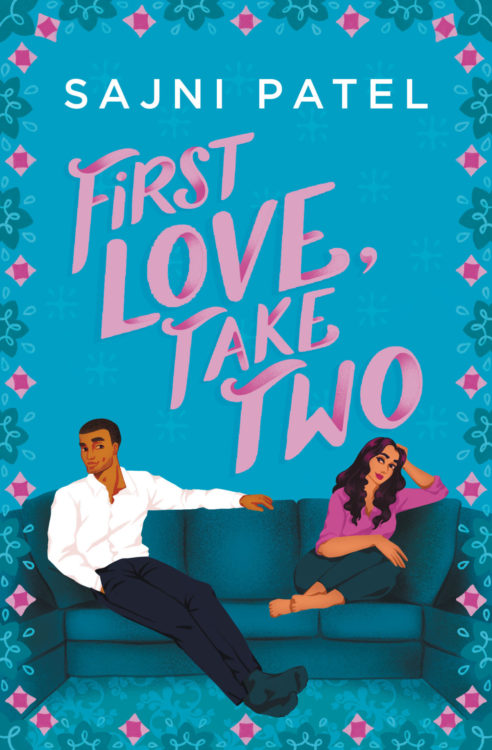 Preeti Patel only has room in her life for family, friends, and her career as a doctor. So when her ex-boyfriend—and man she never forgot—turns up as her new roommate, she’s determined to go about her life as if he’s not even there. But he’s impossible to avoid in the one-bedroom apartment, and the proximity has Preeti remembering all the ways she and Daniel were a perfect fit. But her family doesn’t approve of him, and for a woman who’s always done what her family has asked, choosing love—again—will be the hardest choice she ever has to make.

My eyes burned like the warring flames of hell when my alarm went off at five in the morning. My arm went over my head to hit snooze. Wow. Praise the stars! A full night’s sleep during residency was better than sex.

I swung my arm back, excited to wiggle deeper into the mattress for another five minutes when the back of my hand hit something hard.

I shot up, dazed and clutching the bedspread to my chest. I turned on the bedside lamp and yelped at the sight of Daniel in bed with me.

He groaned, his face buried in a pillow, his hands beneath said pillow, and the bedspread tangled at his waist. The man was shirtless, displaying solid back muscles with perfected ridges and dips. “Can you not make so much noise?”

“That’s the opposite of what I just asked you to do,” he grumbled, his voice guttural and sleepy.

“I mean, I was trying to sleep. Where am I supposed to sleep?”

“I can’t share a bed with you for three weeks.”

“First of all,” he started, showing more of his face in the dim light and squinting. “I was here first. Secondly, you can sleep on the couch if you don’t like it. Thirdly, you won’t combust from sharing a bed with me.”

My face lit up to the heat levels of a blazing sun. I might combust, actually, in some weird, restrained mixture of embarrassment and arousal.

“Can you turn the light off and get on with your day?” He smashed his face into the pillow and went back to sleep.

I guffawed. Seriously? I jerked the bedspread off, climbed out, and went into the kitchen, as far away from the man in my bed short of leaving the apartment.

With my jaw still hanging from my face, I decided to catch up on my infection project by starting a presentation slideshow. Hunched over the kitchen counter, my eyes kept wandering toward the bedroom. Having to share a bed with the finest man this side of Texas, in addition to the fact that after years of school I still couldn’t put together a decent slide deck, had me crawling out of my skin.

Slamming my textbooks closed after an hour, I went for an early morning run. Life didn’t always allot time for a workout, but there was a lot of tension building between work, interviews, living arrangements, engagement, and Daniel. Instead of revving it up by blasting a playlist through my earbuds, I put on a calming app—an anxiety reducer suggested by Daniel back in college.

I faced off with the treadmill in a spacious, quiet gym on the first floor. The ache in my feet and legs, for once, felt good, invigorating, and much needed.

Instead of fretting over things, I took in calming sounds, some gentle songs, some crashing waves, singing birds, and wind gusts. Afterward, I wiped the sweat from my brow and from the machine and sat on a bench to angry text Liya.

She was most likely asleep, all cuddled up in Jay’s arms living her best life. But I hoped that she’d forgotten to put her phone on “sleep mode” and startled awake with every notification chime.

She might’ve expected this. Me freaking out. But as I read my words, I realized how immature I sounded. So, instead of dragging myself down a rabbit hole of negativity, I decided to have fun. What better stress reliever?

Preeti: So, um…do you think I should call off this whole thing with Yuvan if I sort of accidentally slept with you know who?

Ha! That would get her attention. In a matter of seconds, the bubble indicator popped up. Guess she wasn’t asleep after all.

Preeti: You knew leaving me alone in an apartment with him would lead to this!! I hope you’re happy! What am I supposed to do now?

Preeti: What did you think would happen? I mean…there’s only ONE bed.

Liya: AHHH!!! Get it, girl! ONE bed? You should interest him in the ONE shower while you’re at it!

Preeti: This is NOT funny. You set me up to fail!

Liya: This is all circumstantial; Brandy said he needed a place for a few weeks and I was leaving town anyway. Then you needed a place. Was I supposed to say no to you, or go back on my word with him?

Preeti: I guess there are worse things in life than waking up to a fantasy in my bed.

Liya: I don’t really believe you, but nice try. Y’all need to work out some issues before you decide to marry someone else. So. Talk. And maybe get some. Just to make sure you’re over him.

Her text was immediately followed by a bunch of emojis. Heart-eyes, water squirts, devil horns, eggplant, and a fire. How could one get so raunchy with cartoons? Leave it to Liya.

The time on my cell phone flashed six-thirty. I hurried back upstairs.

When I ducked inside, Daniel was still asleep in bed, lightly snoring as I stood over him with arms crossed, wondering if I could drag all two-hundred pounds of muscle out of bed for the next three weeks or erect a barricade between us at night. The sound of him sleeping thrust me back to college. The best morning was any morning waking up beside him.

I shook my head, shaking lose any images of what we often did in the morning after waking up.

I took a quick, frigid shower to cool off and changed into a pair of gray slacks and a lavender blouse.

In the living room, I shoved everything I needed for a day of work into my backpack and grabbed Grandma Thompson’s leftovers when Daniel emerged from the bedroom. His sweatpants hung low, exposing the V-cut of his hips. And shirtless! The shame! The flagrant display of side muscles had me gawking so hard that I might as well have given him a thumbs up when he caught me staring.

Daniel scratched his head and casually said, “Your jaw’s about to unhinge.”

I clamped my mouth shut then spout, “You slept topless next to me?”

He turned toward me and smirked, running a hand down his rather well-maintained abs and disappeared into the bathroom.

I swerved around and chugged water from my water bottle, then promptly refilled it before heading to work. The thirst was real…in more ways than one.

Sajni Patel was born in vibrant India and raised in the heart of Texas, surrounded by a lot of delicious food and plenty of diversity. She draws on her personal experiences, cultural expectations, and Southern flair to create worlds that center on strong Indian women. Her debut, The Trouble with Hating You, was named to “Best of 2020” lists by Cosmopolitan, PopSugar, and Insider. For more on Sajni and her books, visit SajniPatel.com.