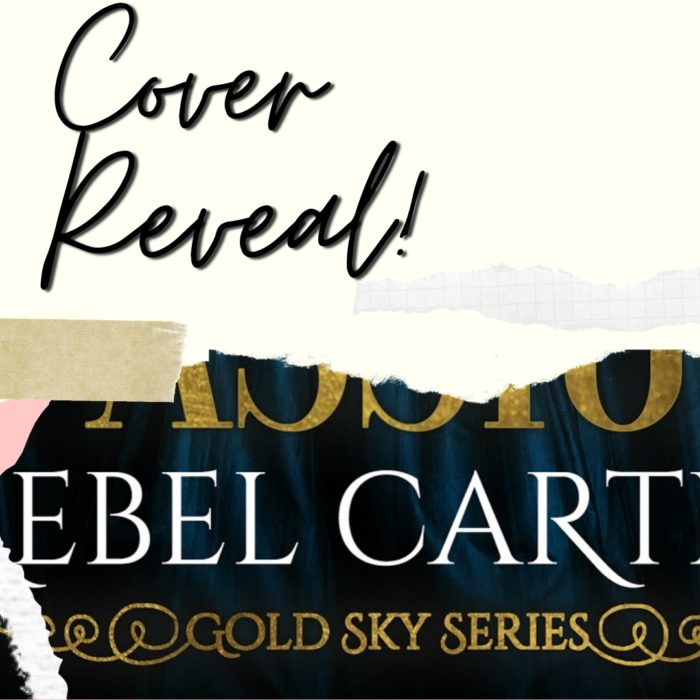 Hello, beautiful readers! I’m back sooner than you thought, right? I told you this month was going to be full of surprises *wink wink* And I wasn’t lying. To show you that I’m not lying and that I’m here to give your day a little bit of happiness, I’m happy to be revealing Rebel Carter’s newest romance, Pride and Passion. If you have been following along with the Gold Sky series, you know these covers never miss. You’re gonna be in love in a second, okay?

I’m a big Rebel Carter fan so you know I’m smiling so hard right now, but I’m ready to let you all get a peek at this brand new cover and an exclusive excerpt below. Are you ready to see the beautiful cover? 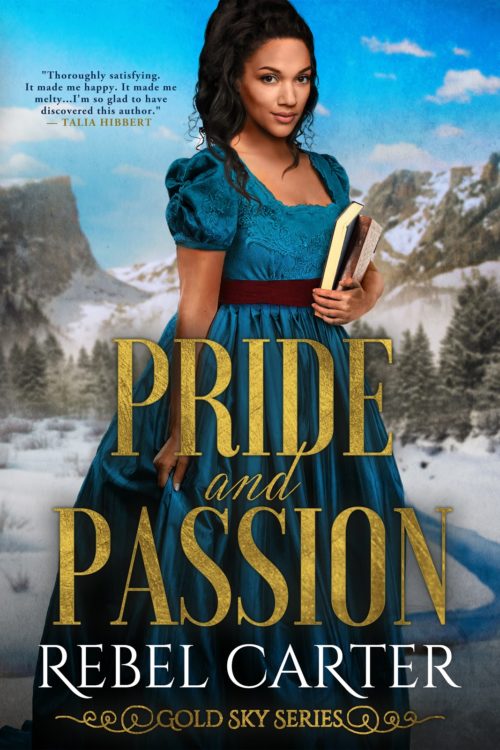 About Pride and Passion:

Delilah Wickes-Barnes has no intention of getting involved with any man, much less the handsome newcomer who once courted her sister, albeit briefly. However, fate (or more accurately, her mother…) has other plans. No matter how hard they try to avoid each other, they can’t seem to stop finding themselves alone together. And when they are tasked with saving the Christmas play how can Del say no? It’s for the children, after all.

A rush of newcomers hope to settle in the unique town of Gold Sky, Montana and Elliot Meyers is no exception. Prosperous and accepting, it’s exactly the place an industrious man with a mission can build his future and find some peace. That is, until Delilah walks into his life and turns everything upside down with her haughty glances and refusal to give him the time of day. But the more time they spend together the more determined Elliot is to make Del see that their fiery arguments can turn to something even more explosive.

If there was any justice in the world, he would be a man that sought to add color and hominess to the place she loved so well. Delilah approached the porch and took a fortifying breath to steady herself. She could do this. She would simply knock, introduce herself, and perhaps extend an invitation to…well, she didn’t know what, but she would do it faithfully so that she could answer her mother truthfully when questioned.

She shifted, balancing the platter in one hand and raised her hand to knock on the door, all the while whispering encouraging words to herself. “You can do this. You are charming and witty and–”

The door flew open. Delilah’s mouth froze mid positive mantra, and she stared at her still raised fist that had scarcely made move to knock when the door had opened to reveal a smiling Elliot Meyers.

It was a good smile. Her breath caught at the handsome man’s face, his warm coffee-colored eyes sparkling as he looked at her. The setting sun was catching in his chestnut hair setting off highlights of burnished red and light brown working to warm his entire countenance. He was open and welcoming, broad shoulders filling the doorway to capacity, nearly a head above her. He was dressed casually, as if he had just arrived home and was eager to relax, his dress shirt rolled to his elbow, waist coat loosened and his hair showing signs that he had run his hands through it more than once.

“You’re early then and–” he stopped, words cutting off and that smile she had just glimpsed vanished without warning. Delilah felt bereft in its absence and she blinked in surprise at the sudden loss of it. It was as if the sun had gone behind the clouds and she shivered as a gust of wintry wind blew past her.

“Oh, I’m sorry, I wasn’t expecting visitors.” He drew himself up quickly, back going ramrod straight. She hated that he was working to button his waistcoat while giving her an apologetic look. She did not want him to put himself back together. No, she wanted the man that had just been in front of her.

“It is I who should apologize,” Delilah rushed, giving him a remorseful smile. “You had no warning of my visit. I thought you might be in need of a meal.”

He blinked in surprise. “A meal?”

“Ah, yes,” Delilah held up the platter and then when she could think of nothing else, thrust it forward into his hands, “here it is. A welcome to Gold Sky meal,” she said when he gave her another confused look.

“I’ve been here for two months,” he told her, but he took the platter all the same. “This is…unexpected at this time.”

“I beg your pardon?” She hadn’t expected that. What did he mean by that?

“Was there a reason the lady has waited thusly to make her introduction? One would think it a slight to have waited this long.” Usually such friendly overtures were done in a timely manner and two months, even on the frontier, was pushing the limits of expected etiquette.

Her cheeks flushed, because the man was right. It could be interpreted that way. “I–well, I mean that–” Delilah floundered, but knew not what to say. In her mother’s plans and Del’s musings there had never been the possibility that Elliot Meyers would feel slighted by her absence, or that he would notice it even. Though…it wasn’t as if he had made an effort to make her acquaintance either, and Delilah had the presence of mind to inform him of such.

“You never made yourself amenable to a welcome either.”

He pursed his lips. “There was hardly a moment when the lady was welcoming.”

Delilah was unable to stop her gasp. “Are you insinuating that I have been unfriendly since  your arrival? Because I will have you know that I have been perfectly civil,” she told him and then her hands went to her hips, “and I have been available on more than one occasion, if the gentleman had sought to look away from his gaggle of admirers.”

That stopped him short, and Elliot snapped his mouth shut but it was not without effort as he smiled at her again and then, because he was a brute, he laughed. Delilah truly hated that his laugh rivaled the warm sunshine of his smile, and she hated it even more that she liked his laugh doubly as much as she liked his smile.

“What’s so comical?” she asked, trying to keep her sudden softening towards him out of her voice.

“I notice the lady took care with her words. Civil,” he said, crossing his muscular arms over his broad chest, “is not nice. Nor is it welcoming.”

“There is nothing wrong with civil. It is perfectly…well, it is–”

Rebel Carter loves love. So much in fact that she decided to write the love stories she desperately wanted to read. A book by Rebel means diverse characters, sexy banter, a real big helping of steamy scenes, and, of course, a whole lotta heart.

Rebel lives in Colorado, makes a mean espresso, and is hell-bent on filling your bookcase with as many romance stories as humanly possible!

Hi, I'm Sil! 21. Mexico. she/her pronouns. I am the owner of the book blog, The Book Voyagers, where I blog and review books. Mainly, I focus on recommending and reviewing diverse books written by marginalized authors. You might also know me for doing book aesthetics and just shouting in capital letters about new books releasing. I'm a big fan of Adult Romance, but I also love Young Adult especially contemporary fiction and fantasy.
All Posts
PrevPreviousExclusive: House of Hollow by Krystal Sutherland Q&A and Excerpt
NextExclusive: And They Lived Happily Ever After by Therese Beharrie Cover RevealNext