Exclusive: The Heiress Gets a Duke by Harper St. George Excerpt 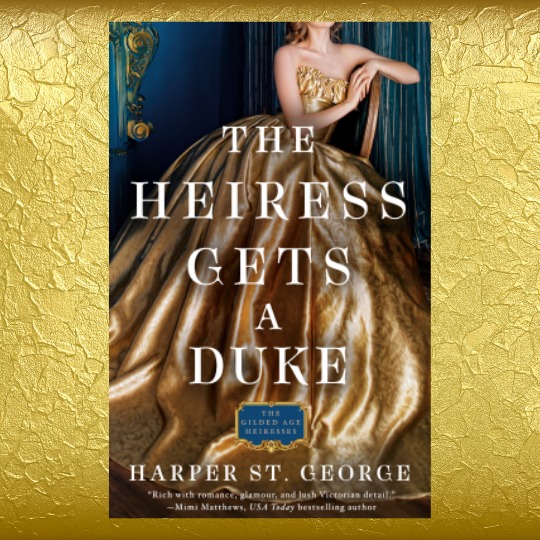 We are so excited to bring you this exclusive excerpt from The Heiress Gets a Duke by Harper St. George! 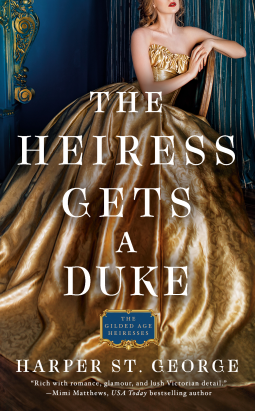 About The Heiress Gets a Duke:

Even a fortune forged in railroads and steel can’t buy entrance into the upper echelons of Victorian high society–for that you need a marriage of convenience.

American heiress August Crenshaw has aspirations. But unlike her peers, it isn’t some stuffy British Lord she wants wrapped around her finger–it’s Crenshaw Iron Works, the family business. When it’s clear that August’s outrageously progressive ways render her unsuitable for a respectable match, her parents offer up her younger sister to the highest entitled bidder instead. This simply will not do. August refuses to leave her sister to the mercy of a loveless marriage.

Evan Sterling, the Duke of Rothschild, has no intention of walking away from the marriage. He’s recently inherited the title only to find his coffers empty, and with countless lives depending on him, he can’t walk away from the fortune a Crenshaw heiress would bring him. But after meeting her fiery sister, he realizes Violet isn’t the heiress he wants. He wants August, and he always gets what he wants.

But August won’t go peacefully to her fate. She decides to show Rothschild that she’s no typical London wallflower. Little does she realize that every stunt she pulls to make him call off the wedding only makes him like her even more.

“Miss Crenshaw, I am the twelfth Duke of Rothschild. My family line can be traced back to the Norman Conquest. In the countless unions between then and now, I am unaware of a single one where the parties involved desired the marriage for reasons that were not mercenary. Historically, it is very low on the list of requirements in a suitable match.”

“You mean you never actually intended to look for a woman you want to marry?”

He shrugged. “Hundreds of families are depending on me to save my estates. I have four houses that are threatening to crumble down around me. I have two sisters who must be launched into society next year, and a mother who must be cared for. Finding a woman I want to marry is a luxury I do not possess.”

She seemed a bit stunned by that admission. Her eyes widened the slightest bit, and she sat back on her heels. Her thoughts were nearly visible as they spun in her head. Had she believed that he was wife hunting because he was simply inconvenienced by his lack of funds and needed a new suit of clothes? God, if only things were that simple.

“All right.” She took in a breath. “I can see things are direr than I anticipated.”

He nodded, remembering when he had had that same realization, though his had involved considerably more alcohol.

Her color receded, and she blinked up at him. “With that in mind, I am very sorry to say this.” She paused, and a hint of pity passed across her eyes before she stomped it out. “But I know who you really are.”

He could not help but grin as his gaze automatically fell to her lips and that kiss played across his mind. “The Duke of Rothschild?” he teased.

She took another breath, and the words rushed out of her. “I know that you are the prizefighter they call the Hellion.”

Her eyes had gone fierce again, though she kept the fire contained. He wanted to see what would happen when she let it loose, so he said, “Why do you think that?” A coil of anticipation tightened low in his gut.

“Do you have the audacity to deny it?”

“That is a strong accusation. How would you know such a thing?” Did she think of that kiss like he did? His gaze dropped to her lips, wanting to taste them again and be allowed to take his time. His blood heated and thickened just imagining it.

“Do not tease me.” Her voice shook, but it had lowered an octave. She was not quite bold enough to have the entire dinner party know of her attendance at that fight, it seemed. “Your hair is lighter, but you have the same strong nose, the same smile. The way you speak is the same. And your hands.” She gestured to his right hand, which had yet to heal completely from the last fight.

His thigh still pained him, as well, but he could walk without a limp when he needed to. Oddly moved that out of all of that she would find his smile noteworthy, he asked, “Not that I am admitting to anything, but why are you accusing me of this?”

She crossed her arms over her chest again and glanced toward the drawing room. They were around a hedge, but it was not so far away that someone could not easily come upon them. Satisfied that they were still alone, she met his gaze with the solemnity of someone condemning a soul to the gallows and said, “Because if you continue in this pursuit, then I will be forced to explain your true nature to my parents and anyone else who will listen. You will only have yourself to blame for pushing me to it. Leave Violet alone, and I am willing to keep your secret.”

“I ask you again, how would you even know about this fighter?”

Never in his life had anyone called him a dolt. They might have thought it a time or two, but even at Eton, being the son of a duke came with a few privileges. Her honest rage soothed away any anger that her words might have evoked. He instinctively knew that he would always get the truth with her. His palms itched with the desire to hold her again, so he fisted his hands to stifle the impulse.

“And you would tell your parents this?” A crease formed between her eyebrows. Ah, she had not considered how she would explain her knowledge of him. “You would tell them that you attended this dangerous fight, nearly injured yourself in the process, and this prizefighter came to your aid, after which you . . .” He allowed his voice to trail off as she began to understand what he meant. A flush worked its way up her chest to her face. Perhaps he should be smiling in victory, but pressure tightened his chest instead as she came to her realization.

She could not out him without implicating herself. Some in society already suspected his prizefighting. Those close to him already knew it. There had been whispers in broader circles, but nothing was confirmed. The truth was that they did not care. At most it was a minor scandal. At worst, it would close a few doors to him. Unfortunately for her, the people who would care about his prizefighting were the same people who would look down on her even more for attending such an event.

He knew the exact moment she came to that same conclusion, because she stepped back and turned as if in revulsion. Whether that distaste was reserved for society or if he was included, he did not know. He only knew that he did not want to be included. He wanted the woman who had seen him at the fight and kissed him. Her truth and her fury.

He was making a mess of this conversation. He had meant to let her know that her plan to blackmail would come to naught. Instead, he had very nearly crushed her with the awful truth of the world in which they lived. Reaching out to touch her shoulder, he let his fingers close into a fist and fall back at his side. There was no way in hell she would welcome his touch.

She whirled to face him, but instead of tears as he had expected, her face was livid. “You will not force my sister into marriage. I do not care if I have to risk my reputation to see it done.” With those words, she turned away from him in a whirl of skirts and stormed off toward the drawing room. A soft orange blossom–scented cloud floated behind her, prickling his skin as it settled over him.

His heart pounded with the aftermath of her fury, and he could only watch her go. “Bloody hell,” he whispered, raking his fingers through his once perfect hair and leaving it mussed.

No one had ever spoken to him that way outside the fighting ring in his entire life. Why did he find it so appealing coming from her?

Her fire was something special. Instead of burning him, it warmed him deep down in a way that he had not words to explain. It soothed him. He wanted it. He wanted her.

Harper St. George was raised in the rural backwoods of Alabama and along the tranquil coast of northwest Florida. It was a setting filled with stories of the old days that instilled in her a love of history, romance, and adventure. By high school, she had discovered the historical romance novel which combined all of those elements into one perfect package. She has been hooked ever since. She lives in the Atlanta area with her family and loves to hear from readers.

Where Romance and Pop Culture Live Happily Ever After.
All Posts
PrevPreviousBook of the Week: Happy Singles Day by Ann Marie Walker
NextNekesa Afia and Pamela Varnado Bring the Love!Next