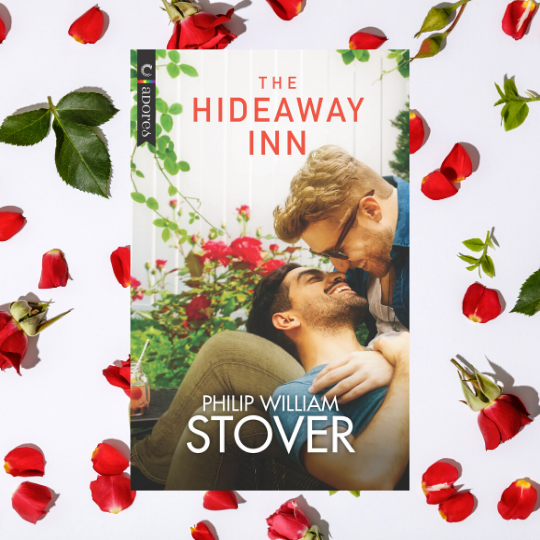 An Introduction by Phillip William Stover

Ever since I first watched Grease I have loved a summer romances. Thoughts of sunshine, lemonade and country fairs always make me smile. This excerpt from The Hideaway Inn, the first book in my Seasons of New Hope series takes place at the local Fourth of July festival. Vince attends with Tack and his gender non-conforming child Jules. In this scene Vince says: “I never thought there was a place for me in picture-perfect Americana, but maybe that frame has shifted recently and become more inclusive.” I’m so proud to have this book be part of the Carina Adores launch. I grew up reading Harlequin romances, and I’m thrilled to be a part of the shifting frame.

About The Hideaway Inn

High school wasn’t the right time or place for their relationship to grow, but now, fifteen years later, a chance encounter changes both of their lives forever.

No one in the charming river town of New Hope, Pennsylvania, needs to know that Vince Amato plans on flipping The Hideaway Inn to the highest bidder and returning to his luxury lifestyle in New York City. He needs to make his last remaining investment turn a profit…even if that means temporarily relocating to the quirky small town where he endured growing up. He’s spent years reinventing himself and won’t let his past dictate his future.

But on his way to New Hope, Vince gets stuck in the middle of nowhere and his past might be the only thing that can get him to his future. Specifically Tack O’Leary– the gorgeous, easygoing farm boy who broke his heart and who picks him up in his dilapidated truck.

Tack comes to the rescue not only with a ride but also by signing on to be the chef at The Hideaway for the summer. As Vince and Tack open their hearts to each other again, Vince learns that being true to himself doesn’t mean shutting down a second chance with Tack — it just means starting over and letting love in.

By the middle of the afternoon the festival is swarming with people. We’ve visited the petting zoo a number of times, eaten corn dogs, cotton candy and lemonade, looked at the photos and paintings in the barn, and Jules has  made a sword with a jeweled handle and feathers on the tip so it “doesn’t hurt anybody” after we each finished our wands.

Walking around the festival I think about when I was growing up how I hated everything about this area. I thought it was so boring and Podunk. I thought I would never find a way to be a part of it. I was sure there would be better things waiting for me in a big city like New York but after a day here with Tack and Jules now I wonder if those things are just different not better.

“I think I want to go in the bouncy castle now. Can I?” Jules asks Tack.

“Are you sure?” Tack asks seeing that it’s even more crowded with kids. “Do you want us to go over there with you?”

“No, you guys can wait here.” Tack gives them the okay and they run over, kick off their shoes and start bouncing before they even get inside. Tack and I sit next to each other in a quiet spot across from the bouncy castle.

“I’m exhausted.” I say and lean back on the bench and spread myself for a quick stretch that I’m too tired to finish.

“Cooking for a full dining room is nothing compared to keeping up with Jules.”

I can hear music coming from a small brass band playing at a small stage on the other side of the festival. It’s some kind of patriotic march like you would here at a parade. A gentle breeze sweeps across us and we both sigh almost in unison. We sit in our silence for a while. I’ve been waiting for a moment like this to return, one where we are connected without talking. It’s so easy to be around Tack. I can just relax for a few moments. I never thought there was a place for me in picture-perfect Americana but maybe that frame has shifted recently and become more inclusive. Maybe I can belong in places where I never thought I was allowed.

A clown making balloon animals pops a poodle’s head right in front of us and it breaks the spell.

“You ever think about having one?” Tack asks.

“No,” he says slapping me playfully on the arm. “A kid. Have you ever thought about having a kid?”

No one has ever asked me that before. I’ve always been too focused on success to really give it serious thought.

“I mean, I know you don’t want a boyfriend or a husband. Your career comes first and all, but I just thought it might have crossed your mind at some point.”

I still don’t know how to answer him. I never really thought it was something realistic to consider. I know gay men adopt and have surrogates but generally you need a partner for that and I never thought that was part of my plan.

“If I did have a kid, I know I would want him to have a different life than I did.”

All a kid like Jules really needs is someone to listen to them. I know that’s what I needed. I wouldn’t need to give Jules advice about what to do or how to act. I’d just wait until they came home from school and listen to everything they had to say. I look at Vince and say, “I’d ask questions about how they feel and their friends and what they like to do and what scares them. I’d make sure they felt heard in every way. I would raise a kid to be themselves. To not be scared of anything. I’d protect them from all the people in the world who would want him to fit in.” I speak firmly and decisively. Tack listening to me with his ears but keeping an eye on his kid in the bounce house. “Like you’re doing with Jules,” I say.

“Thanks, Vince. It definitely sounds like we are on the same page about what a kid needs.”

I never thought Tack could be any sexier. I’ve fantasized about his body since I was a teenager and that fantasy has never gotten old. But there is something about seeing how tender he is with Jules and knowing that he is finally out to the world that makes me want him more deeply than I have ever imagined. The thought of us being on the same page about raising a kid makes me head spin.

A breeze sweeps across our faces and I let it blow my hair across my forehead without any resistance. It’s two months until Labor Day and I can’t keep this fight up that long. I’ll deal with that moment when it comes but right now my ability to think beyond this moment is as strong as a cheap paper plate.

“About the other day,” I start but it takes a second to get up my courage. “In the stream.”

“I know you don’t want to talk about it. I get it,” he says and I see his bottom lip raise as a frown appears across face.

“What do you want, Vince?” he says looking at me.

His hand is resting on the bench just a few inches from mine. Inch by inch I move closer to his until his pinky is aligned with mine. As soon as our skin connects he smiles. He keeps looking ahead but I know the connection is powerful. It’s not like kissing in the stream. That was pure sexual heat. This is different.

I take my hand and move it on top of his. It lands there for just a second before he turns his over so that my hand is in his palm and then he covers it with his fingers. We are sitting on a bench at the Tinicum Fourth of July Festival and now we are both smiling.

Philip William Stover splits his time between Bucks County, Pennsylvania, and New York City. He has an MFA in writing and is a clinical professor at New York University where he is the former chair of the writing curriculum. As a freelance journalist, his essays and reviews have appeared in Newsday, The Forward, The Tony Awards, The Atlanta Journal-Constitution, The Houston Chronicle, The Milwaukee Journal Sentinel, and other national publications.

Philip grew up tearing the covers off the romance novels he devoured so he wouldn’t get teased at school. Now he enjoys traveling the world with his husband of over twenty years and sitting in front of the woodstove with their half-Bassett, half-Sharpei rescue pup, and now he would never consider defacing any of the books he loves.

He is thrilled to be returning to romance and loves to write cozy, warm-hearted stories served by hairy forearms with a side of fries. He can be found on social media as Philip William Stover.

Keira Soleore writes for the International Examiner and Cogitations & Meditations. She enjoys connecting with readers on Twitter (@keirasoleore) and through her website (www.keirasoleore.com). Her interests include medieval manuscripts, philosophy, poetry, picture books, choir, sunshine and beaches. Keira is a pseudonym.
All Posts
PrevPreviousDaily Frolic: Coffee Dippin Dots!?
NextIt’s Pick a Strawberry Day! Here’s What to Read.Next