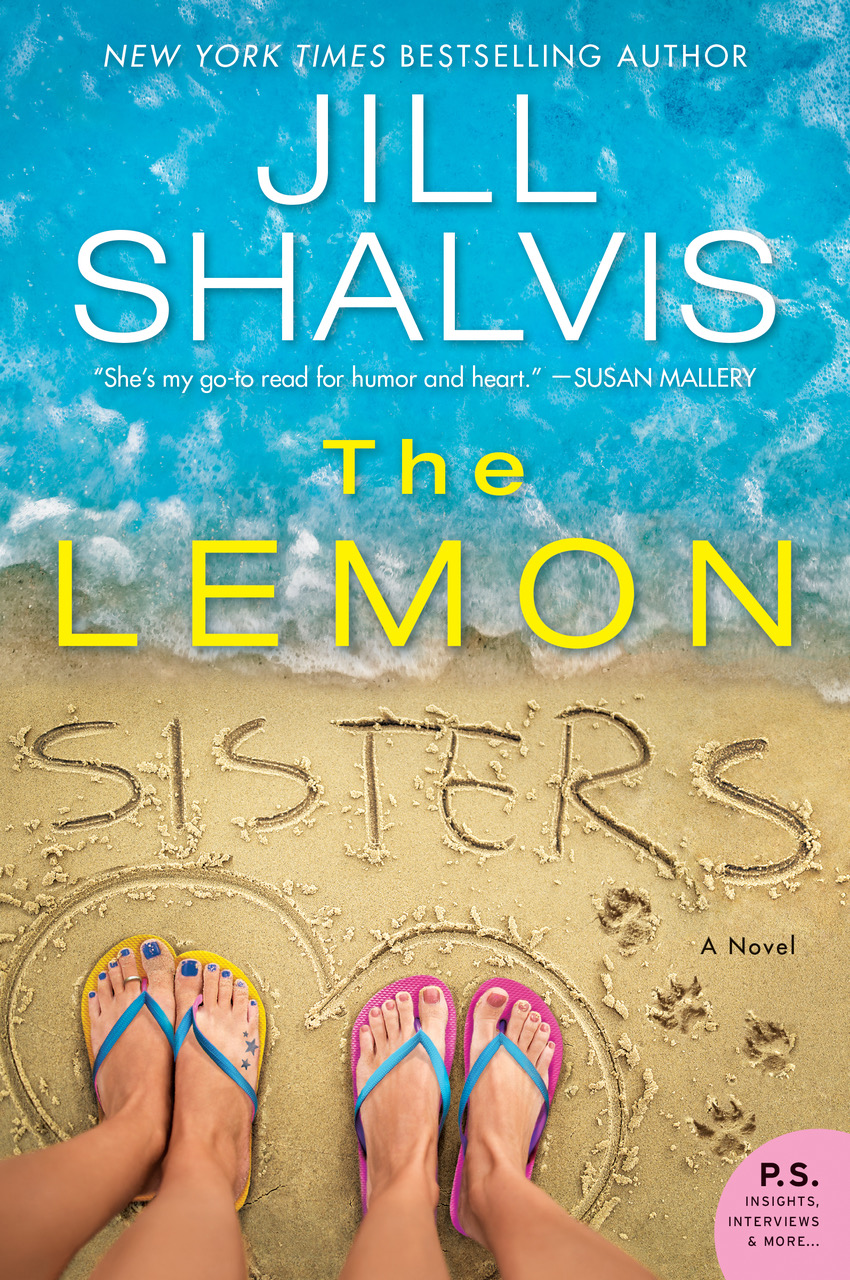 Note from Frolic: We’ve got a special treat for you today! An exclusive excerpt from Jill Shalvis’ upcoming novel The Lemon Sisters, out Jun 18th!

She closed her eyes and told herself to ignore the soft taunt. No matter what they’d been – or hadn’t been – to each other, she wasn’t looking for love with anyone, and certainly not a wash and repeat with the one man who could destroy her. It wasn’t as if she’d been a monk. She’d dated, but she hadn’t let anyone in. Not ever. Even Cole had complained about the brick walls she’d encased her emotions in.

And he was right. She could get involved to a point, but she always pulled back.

“You don’t have to run from me, you know,” Garrett said. “There’s no reason for there to be anything but honesty between us.”

Yes, there was… “Maybe I’m just not feeling it.”

“Hey,” she said and poked a finger in his pec. His hard, ungiving, sexy pec. “If I was feeling it, you’d know.”

“Yeah? How?” he challenged.

“I’d be …flirty. I certainly wouldn’t be thinking of all of your faults.”

He grinned. How like a man to not be worried about his faults.

“So what are these so-called faults?” he asked, curious. Still not concerned.

“Well, for starters, you’re wearing black knit boxers with bananas on them.”

This made him laugh outright. “Someone sent me a subscription box. They come once a month. Last month’s pair had cocks all over them.”

He was still smiling. “If you’re curious, I’ll be happy to wear them tomorrow and give you a peek.”

“Whatever,” she said. “And the fact that some woman sent you a subscription to undies is another reason I’m not feeling it. You’ve stayed friends with every single person you’ve ever met.”

She shrugged. Of course it wasn’t a fault. It was the opposite of a fault. “Well, except for me, of course.”

“Because you don’t answer phone calls, texts, emails…” He tilted his head. “Tell me something.”

“Why did you and your last boyfriend break up? That Cole guy.”

“But you’re sleeping together,” he said, his eyes holding hers prisoner. “Or you were.”

He smiled grimly. “You just told me.”

Dammit. She crossed her arms over her chest. “We’re not together if that’s what you’re asking.”

“Why aren’t you together?” he pressed.

Did his eyes warm very slightly, or was that her imagination? “Because you’re just not feeling it?” he asked mockily, using her words.

She rolled her eyes. “You think you’re funny. How about we talk about you. Tell me about the girlfriend you said you don’t have. The one who called you the other day for a hookup.”
“It wasn’t a hookup. She dumped me.”

She snorted. “Right. You expected me to believe a guy who looks like you do, and is funny and smart like you are, got dumped?”

“Actually, I expect you to believe whatever I tell you.” He shifted close until they were knee to knee. “Because I’ve never lied to you, Brooke. Never will.”

About The Lemon Sisters:

The New York Times bestselling author of Rainy Day Friends and Lost and Found Sisters returns to Wildstone, California, where two completely opposite sisters—who are still nursing wounds from the past—realize they need each other more than they think.

When Brooke’s older sister, Mindy, shows up at her door with her three kids in tow, she barely recognizes her sibling who looks like she’s on the verge of a total breakdown. While adventurous, wanderlust Brooke was always the problem child, eager to slip free of Wildstone and its small-town constraints, Mindy was the golden child, who never had a hair out of place or a GPA below 4.0. The Mindy that arrives at Brooke’s apartment however, is a far cry from the ever-perfect doctor’s wife.

Brooke’s further stunned when Mindy asks to trade places with her for a few days so she can pick up her pieces and put herself back together. What Mindy doesn’t realize is that Brooke is just as broken. Her sister needs her though, so Brooke takes the kids and returns to Wildstone.

But how does one go home after seven years away and what feels like a lifetime of secrets? It doesn’t take long for Brooke to come face-to-face with her past, in the form of one tall, dark, sexy mistake. But Garrett’s no longer interested, or so he says. Only his words don’t match his actions, leaving Brooke feeling things she long ago shoved deep.

The sisters begin to wonder if the childhood taunts were true, are they lemons in life? In love? True or not, they know one thing — you can’t run far enough to outpace your demons. And when long-dead secrets surface, they’ll have to overcome their differences and learn that sometimes the one person who can help you the most is the one you never thought to ask.

Jill lives with her family in a small town in the Sierras full of quirky characters (Any resemblance to the quirky characters in her books is mostly coincidental). She does most of her writing on her deck surrounded by more animals than humans. Which is quite astonishing considering she’s a city girl who was plucked from the wilds of L.A. to the wilds of the Sierra’s. Most of her books come from a combination of hard work, cookies, and hot guy pics, and not necessarily in that order.

Where Romance and Pop Culture Live Happily Ever After.
All Posts
PrevPreviousSister, Sister: The Arya & Sansa of Romance Novels
NextDaily Frolic: We’re FINALLY Getting a Doc About Toni MorrisonNext