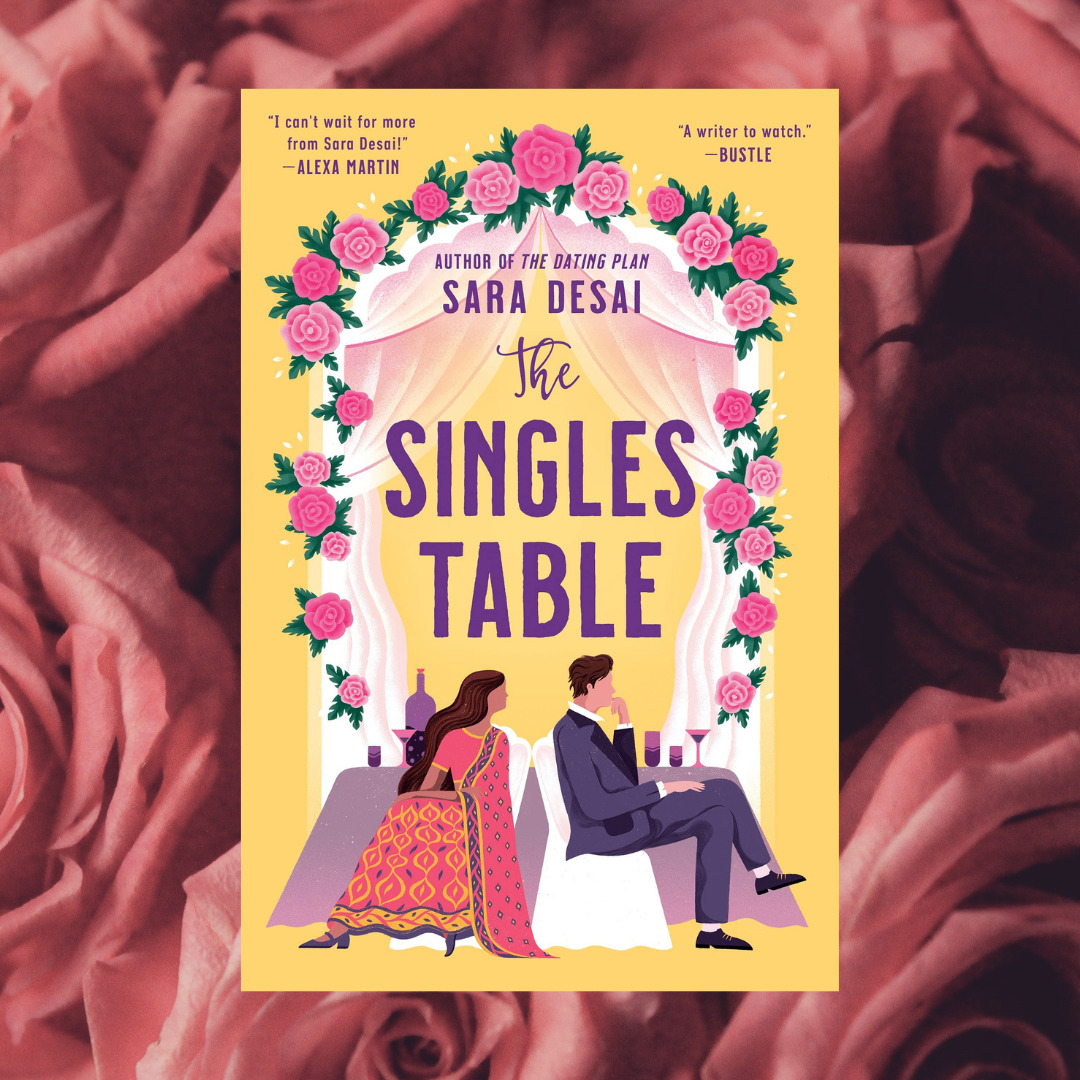 We are so excited to bring you this exclusive excerpt from The Singles Table by Sara Desai! 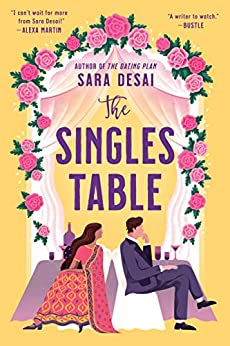 About The Singles Table:

Opposites attract in this laugh-out-loud romantic comedy about a free-spirited lawyer who is determined to find the perfect match for the grumpy bachelor at her cousin’s wedding.

After a devastating break-up, celebrity-obsessed lawyer Zara Patel is determined never to open her heart again. She puts her energy into building her career and helping her friends find their happily-ever-afters. She’s never faced a guest at the singles table she couldn’t match, until she crosses paths with the sinfully sexy Jay Dayal.

Former military security specialist Jay has no time for love. His life is about working hard, staying focused, and winning at all costs. When charismatic Zara crashes into his life, he’s thrown into close contact with exactly the kind of chaos he wants to avoid. Worse, they’re stuck together for the entire wedding season.

So they make a deal. She’ll find his special someone if he introduces her to his celebrity clients. But when their arrangement brings them together in ways they never expected, they realize that the perfect match might just be their own.

The stranger’s deep, penetrating voice rumbled through Zara’s body. Rich and full, it was the kind of voice that made lawyers spill milkshakes and babble incoherently as they thrust sticky business cards into celebrity hands.

“Is there a problem?” Parvati made a show of inspecting her weapon while Zara tried to untie her tongue. Although she couldn’t see the dude’s face, he was tall—at least six‑two—and powerfully built, the top of his coveralls unzipped and tied around his narrow waist. His black T‑shirt clung to his broad shoulders and magnificent pecs as if it had been painted on his muscular body. One thick, deeply tanned forearm bunched and flexed as he unholstered his weapon in one smooth practiced motion.

He waved vaguely in their direction. “Not if you want to be covered in painful bruises.”

“I’ve been kicked by horses, bullies, and even by my piano teacher,” Zara said. “I’ve also been stung by a wasp, pecked by a goose, and swarmed by ants. I’ve broken an arm, a finger, and a toe, and I dislocated my shoulder on a trampoline. A little pain isn’t going to slow me down.”

Seemingly satisfied by Zara’s commitment to winning at all costs, the dude angled his head in Parvati’s direction, dipping it ever so slightly, as if inviting a similar assurance.

Parvati fixed him with a stare. “I don’t bruise easily.”

“Unlike me,” Zara interjected. “My ex gave me a small love bite one night, and I had to wear two scarves to work because it looked like someone had been chewing on my neck.”

“We’re not together anymore,” she said quickly, assuming he was appalled by her ex’s behavior. “Although it had nothing to do with the hickey. Who doesn’t like a reminder of a great night?”

Clearly not Mystery Man, because he shook his head. “Not only will your dress leave you vulnerable to weapons’ fire, it will hamper your ability to run and hide, thereby lowering our chances of success.”

Well, that was one less potential hookup she had to worry about. He was probably one of those uptight alpha CEOs who had made his first billion by the time he was thirty and owned a jet, a fleet of sports cars, a fancy penthouse, and maybe even a red room of pain.

“Have you considered that my dress might be an asset? I could strip down in the forest and distract the opposing team.” She checked her paintball pod, opening and closing it with a loud click. “Just so we’re clear . . . the bride wants the dresses so we’re wearing the dresses.”

Zara poured the paintballs into the hopper and turned away from the officious bastard with the bedroom voice. “Then I’ll shoot her first and him second.”

If Mystery Man had any further comments, he was forced to keep them to himself when a middle‑aged man in a military‑style camo vest called the two teams together to go over the rules. Keep your mask on. No climbing trees. No shooting at the head. It’s all about teamwork. No physical contact. After a few quick pointers, he sent them into the forest for their first game, capture the flag.

“Everyone, pair up.” Mystery Man, seeping alpha maleness, quickly took charge when everyone started talking at once. He pointed at people in pairs. “You and you. You and you . . .” He pointed to Parvati and a frail twiglike woman in a yellow satin dress, who gave a betraying blush. “And you and you, sweetheart.” He paired off the rest of the team with a few more condescending terms of endearment for anyone in a dress.

What a jerk. Zara didn’t need to see his face to know him. He was every cocky bastard who had charmed a woman into his bed and strung her along with promises of a future that was never go ing to happen. A hunter in his natural habitat. Well, she wasn’t prey.

Mystery Man split the pairs into three groups, leaving Zara standing alone. “The front‑runners are in charge of scoping out the flag and our opponents’ ambushes,” he said. “The middle group will cover the front and try to eliminate a majority of our opponents. The back defends our flag and territory. One third of the pairs will run up the middle while the other two thirds flank on the sides. We’ll communicate with whistles. Once you step onto the field, I expect you to be focused. We’re here to win.” He allocated the positions to the teams. “Any questions?”

Zara held her hand up in the air. “What about me?”

“I prefer to work alone.” He strode into the forest while the rest of the team spread out and disappeared into the bushes.

“I thought this was all about teamwork,” she called out, following behind him. “There are no lone wolves in a team. And just so you know, I used to play capture the flag on the school playground and I always won.”

“This isn’t school.” His deep voice was as clear as if he were facing her.

“It isn’t a real war,” she pointed out. “It’s a game. We’re at a paintball field in San Jose that gives a ten percent discount if you buy your paintballs in bulk and charges an extra five dollars to cover laundry fees. Maybe you should lighten up.”

He glanced over his shoulder. “Maybe you should stop talking.”

“Because I’m not listening.”

Zara waited until he’d walked a good twenty feet away before she shot him in the ass.

“What the f—?” He whirled around to face her, his hand grip‑ ping the injured area.

“I was helping you on your way.” She turned and walked through the bush, using her weapon to clear a path.

“You won’t last five minutes,” he called out.

Sara Desai has been a lawyer, radio DJ, marathon runner, historian, bouncer and librarian. She lives on Vancouver Island with her husband, kids and an assortment of forest creatures who think they are pets. Sara writes sexy romantic comedy and contemporary romance with a multicultural twist. When not laughing at her own jokes, Sara can be found eating nachos. Visit Sara at www.saradesai.com

Where Romance and Pop Culture Live Happily Ever After.
All Posts
PrevPreviousExclusive: Neal Shusterman & Jarrod Shusterman Chat ‘Roxy’ and More
NextBreaking Barriers with Category Romance By Jeff Adams & Will KnaussNext