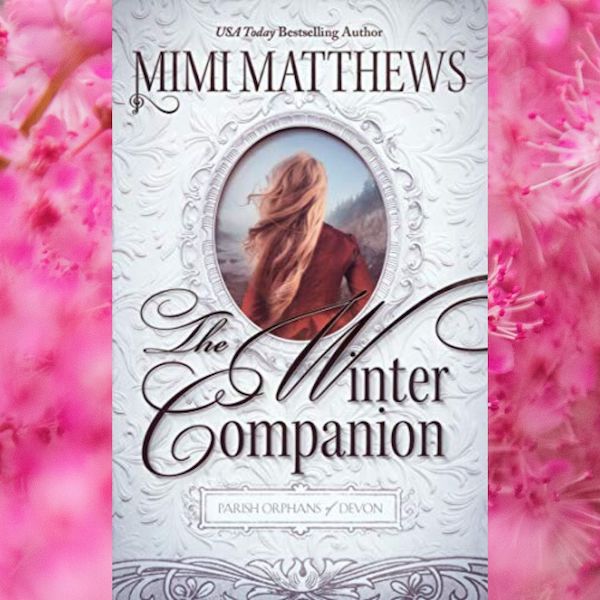 I am especially delighted to bring an excerpt of Mimi Matthews’ fourth book in her Parish Orphans of Devon series, The Winter Companion. Matthews is a USA Today bestselling author, and her Victorian romances have been very well-received among fans of historical romance and this one promises no less. After you’ve read the excerpt, no doubt you will agree with me. –Keira

About The Winter Companion:

As a lady’s companion, Clara Hartwright has never received much attention from anyone. And that’s precisely how she likes it. With a stormy past and an unconventional plan for her future, it’s far safer to remain invisible. But when her new employer is invited to a month-long holiday at a remote coastal abbey, Clara discovers that she may not be as invisible as she’d hoped. At least not as far as one gentleman is concerned.

Neville Cross has always been more comfortable with animals than people. An accident in his youth has left him with a brain injury that affects his speech. Forming the words to speak to his childhood friends is difficult enough. Finding the right things to say to a lovely young lady’s companion seems downright impossible. But Miss Hartwright is no ordinary companion. In fact, there may not be anything ordinary about her at all.

During a bleak Devon winter, two sensitive souls forge an unexpected friendship. But when Clara needs him most, will Neville find the courage to face his fears? Or is saying goodbye to her the most heroic thing he can do?

Neville ran a hand over his hair as he passed through the main hall. He’d gone no more than a few steps when he stopped short, his attention arrested by movement on the stairs.

Miss Hartwright was descending, garbed in her cloak and bonnet, with Bertie in her arms. When she saw him, her mouth curved into a smile. “Mr. Cross. Good afternoon.” She stepped down into the hall. “Are you going to the stables?”

Her gaze dropped briefly to his clenched hand. Her brows knit as her eyes met his, her smile fading. “Is something the matter?”

He didn’t answer. Everything was getting too jumbled. And he was too aware of her, curse it. He couldn’t think straight, let alone speak.

“I must take Bertie out,” she said. “But if you’d like to talk, I’m happy to listen.” She searched his face. “Would you like to talk?”

A surge of resentment rose within him. But something else rose in him, too. It was a swell of longing. An ache so bittersweet it tightened his throat and pricked at the back of his eyes.

He swallowed hard, abandoning his pride. “Yes, I…I would.”

“Very well.” She waited while he fetched his hat and coat, and then again for him to hold the door open for her. As she passed through it, he caught the orange blossom fragrance of her hair.

His fingers tightened on the doorknob, drawing it shut behind them. They exchanged not a word as they started down the winding cliff road, Paul and Jonesy trotting ahead.

It wasn’t raining at the moment, but the wind was icy sharp. It ruffled Miss Hartwright’s skirts, and the long ribbon ties of her bonnet. She wrapped her cloak tighter around Bertie.

Neville was silent, his head bent against the cold, and his hands thrust into the pockets of his black woolen coat. In the distance, storm clouds gathered over the sea. “Mr. Atkyns is dead,” he said at last.

“The gentleman you wrote to?” Her brow creased. “Oh, dear. How unfortunate. Was it very recent?”

“Last m-month. Part of his estate is being sold. The livestock and…and…” He took a breath. “There’s a public sale in January. His widow wishes to m-meet with me to…to talk about the wild ponies.”

She seemed to comprehend the difficulty. “And you don’t feel you can go? That you can speak to her?”

He shook his head, a muscle working in his cheek.

She was quiet for a long moment. Their steps down the cliff road were slow and measured, nothing like their hurried pace the previous day. He heard her take a breath. “May I ask…forgive me if I’m being too bold, but…what caused your speech impediment?” She paused. “It is an impediment, isn’t it?”

He didn’t answer straightaway. He couldn’t. It wasn’t the sort of thing he’d ever imagined himself discussing with her.

“From there.” He pointed to the cliffs in the distance, the ones that curved along the sea some miles away. They were different from the cliffs beneath the Abbey. No jutting outcroppings of stone existed to aid someone in descending to the beach. The cliff face was stark and sheer, dropping straight down to the violently frothing surf below.

“There?” The whistling wind nearly stole her voice. “But how?”

“We were climbing down, and…and I fell. I hit m-my head and I dropped…into the sea. Alex saved me.”

They’d been joking with each other as they went, spirits high on the thrill of it all. Neville had turned to say something. A clever, laughing remark. In that same instant, the rock had crumbled beneath him.

He came to a reluctant stop in front of her. “Long ago. When I was a boy.”

“What in the world were the two of you doing up there? Surely you must have known it was dangerous.”

Of course they’d known. But the climb down the cliffs had seemed worth the risk. It had been the only way to access the beach below, and the boat that was docked there. They’d used it to row down the coast to Greyfriar’s Abbey.

At the time, the Abbey had been the home of Sir Oswald Bannister. He was the orphanage’s foremost patron — and rumored sire of several of its inmates.

Justin was one of them. Alex was likely one too.

Add to that, the lure of legends that spoke of buried pirate’s treasure, and the four of them could scarcely resist venturing onto the Abbey’s grounds several times a week. Sometimes they made mischief for Sir Oswald. Other times they searched for the treasure.

In the end, only Neville’s fall had been able to stop their pursuits.

“Thornhill and Finchley were there, too,” he said. “We d-didn’t care about the danger. We weren’t afraid.”

“Boys never are when it comes to foolish schemes. My own brother might have broken his neck a dozen times over if my mother and I hadn’t taken him in hand.”

Neville’s gaze lifted to hers. There was a storm in his breast, as tumultuous as the one brewing over the sea. “I didn’t have a…a m-mother. Or a sister. None of us did. We were p-parish orphans.”

He didn’t say anything.

It was reply enough.

His throat contracted on a swallow. His gaze flicked out to the sea. To the treacherous cliffs beyond. The ones he’d fallen from so long ago.

“What happened afterward?” she asked.

“I don’t remember.” His mouth flattened. “For a long while, I…I didn’t even remember falling.

Only waking up in…in the orphanage.”

It was only later that it had come back to him. First in nightmares, and then in waking memory. The terror when he’d fallen and hit his head. The rush of salt-damp wind as he’d plummeted down, sucking away his breath before he’d ever hit the water. And the sea itself. A living organism — cold, dark and relentless. It had swallowed him whole in the seconds before he’d lost consciousness.

He remembered those early nights in the orphanage, coming awake all at once in his narrow bed, his sheets soaked with sweat. “I c-can’t breathe,” he’d gasped, when he could speak at all.

But there had been plenty of air. It had been compassion the orphanage lacked.

He resumed walking toward the stables. “A…convent.”

USA Today bestselling author Mimi Matthews writes both historical nonfiction and award-winning historical romances set in Victorian England. Her articles on nineteenth century history have been published on various academic and history sites, including the Victorian Web and the Journal of Victorian Culture and are also syndicated at BUST Magazine. In her other life, Mimi is an attorney. She resides in California with her family, which includes an Andalusian dressage horse, two Shelties and two Siamese cats.

Where to Find Mimi:

Keira Soleore writes for the International Examiner and Cogitations & Meditations. She enjoys connecting with readers on Twitter (@keirasoleore) and through her website (www.keirasoleore.com). Her interests include medieval manuscripts, philosophy, poetry, picture books, choir, sunshine and beaches. Keira is a pseudonym.
All Posts
PrevPreviousDaily Frolic: The New Mulan Trailer is Here!
NextHistorically Yours: Top Historical Romance Picks for February 1 to 15Next