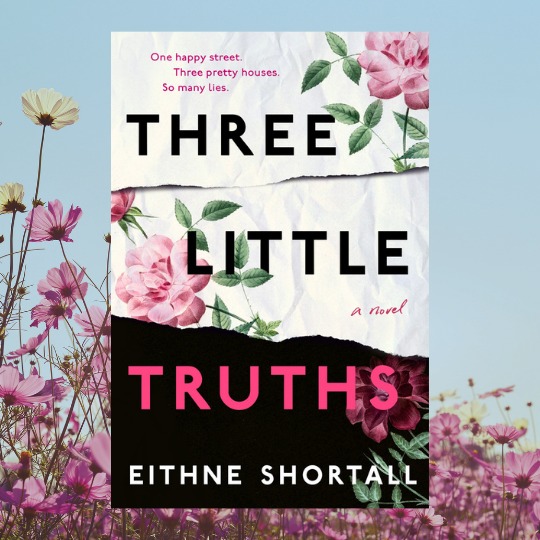 We are so excited to bring you this exclusive excerpt of Three Little Truths by Eithne Shortall, out now! 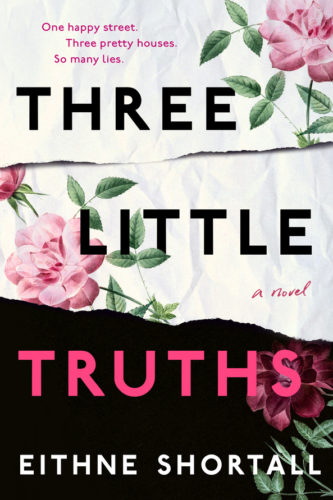 Big Little Lies meets One Plus One in this story of three women neighbors looking for a fresh start, and the love affairs, rivalries, and scandals found on the other side of the white picket fence.

One happy street. Three pretty houses. So many lies.

Martha used to be a force of nature: calm, collected, and in charge. But since moving her husband and two daughters to Dublin under sudden and mysterious circumstances, she can’t seem to find her footing. Robin was the “it” girl in school, destined for success. Now she’s back at her parents’ with her four-year-old son, vowing that her ne’er-do-well ex is out of the picture for good. Edie has everything she could want, apart from a baby, and the acceptance of her new neighbors. She longs to be one of the girls, and to figure out why her perfect husband seems to be avoiding their perfect future. Three women looking for a fresh start on idyllic Pine Road. Their friendship will change their lives and reveal secrets they never imagined.

Martha Rigby had been sitting at the kitchen table since Robert left for work. The girls, who had taken to their new school with such ease it almost seemed pointed, had set off before either parent was awake.

There were boxes everywhere, furniture still stacked in corners, gas and electricity meter readings jotted down on a pad in front of her waiting to be registered, a to-do list lying unticked beside it.

She knew she should stand up, make a start on things.

The radio played on and the light through the grubby windows grew incrementally brighter.

She looked around the room and felt a profound sense of detachment. The idea of doing anything was so exhausting that the only reason she could think to stand was to go back to bed. Oscar snored by the back door. She’d have to get up eventually, if only to let him out to do his business.

Her distorted reflection glinted in the oven door. The old her, the real her, would never have let it get to this.

Maybe she should take the tablets Dr. Morten had prescribed. There was no shame in it. Most people who’d been through what she’d been through would have been knocking them back well before now. Dr. Morten had made that very clear. But Martha took pride in her willpower. She’d had her wisdom teeth out last June without so much as a painkiller. In fact, the last time she took aspirin was four years ago, and she only allowed herself that indulgence because it was the morning after her blowout fortieth birthday party.

Martha didn’t take drugs unless entirely necessary. If her body had something to tell her, she wanted to be able to hear it.

But then, this wasn’t a toothache or a hangover she was dealing with. To put it mildly.

The radio jingle went for the eleven o’clock news. She could have sworn the ten o’clock bulletin had just ended. She’d hear the headlines, see if anything had happened beyond these walls in the past hour, and then she’d stand up.

The male Irish accent, she noted. No mention of its female counterpart. Presumably this was what Sinéad meant when she said the patriarchy was always at work. “And we’re working for it, Mum,” she’d insisted the previous evening before Robert told her pubic hair was not suitable dinner table conversation. That just set her off again. Her father’s views were “a domestic iteration of the institutionalized subjugation of women’s bodies.” Robert gave up then and went back to his microwaved lasagna.

Martha hoped this new school would be as good as the last. Both her girls had loved their old place. Sinéad had been chair of the debating team and she’d just been made editor of the paper, despite only being in fifth year, when she was yanked out of her old life and shoved into this one. And with that, Martha’s mind was off, rushing down the M7, fleeing their new life, heading back to their old one, but she caught herself just before the Limerick exit.

She redirected her attention to the radio.

Was that really news, though? About the Irish accent? An international poll conducted by some travel company you’d never heard of and verified by nobody?

Martha thought of all the terrible things that happened in the world and never made the news. She wouldn’t have wanted their ordeal broadcast on national airwaves—the local papers picking up on it was bad enough, though Robert hadn’t minded at all—yet it was amazing how there’d never been a question of it. Nobody had thought such an event worthy of twenty seconds of radio coverage, not when matters as important as “orgasmic accents” needed the nation’s attention. What had been on the news the day it happened? She thought and thought but she couldn’t remember.

Perhaps she was doing a better job of blocking it out than she realized.

She’d leave the tablets for another while so.

The bulletin ended, the weather was reported, and Martha continued to stare out the kitchen window into a garden so overgrown the weeds were practically coming in to get her. The old woman who’d lived here before had gone into hospital with pneumonia and never come out. The place had smelled faintly, but persistently, of fermented cat urine when they arrived. Robert insisted he couldn’t smell anything, of course. It had lessened now, or maybe she’d just gotten used to it.

Martha hated her new kitchen. She hated the whole house. She knew these red brick homes were highly sought after, but she couldn’t stand how old they were. No matter what she might do—and admittedly she hadn’t done much yet—everything felt dirty. She hated how the floorboards creaked even when she wasn’t standing on them and how there always seemed to be a draught coming from somewhere. She missed their home; the nice, modern country pile about twelve miles outside Limerick city, with its high energy rating and underfloor heating. She and Robert had it built right after they were married, with the plan of never moving.

Number eight Pine Road had cost almost twice as much as their forever home. It was an obscene amount of money for a place that wasn’t half as cozy. But the worst bit, the bit that made her want to twist the tea towel into a ball and stuff it into her mouth to muffle her red-hot rage, was that they could only afford this money pit because Robert had gotten a promotion—and he’d only gotten a promotion because of what had happened to them, because of what had caused them to move in the first place.

Martha knew her family blamed her for the move. She was the one who could no longer sleep in their house; it was she who’d uprooted everyone, moved the girls away from their friends, made them change schools. Robert, meanwhile, had swooped in and saved the day, yet again. He had made an alternative possible. Three months on and he was still the hero.

The thoughts boiled up and Martha wondered if she’d have to get up and grab the towel from the draining board. She couldn’t even scream freely in her own empty home. A terrace was supposed to be safer, that had been the idea, but all Martha felt was suffocated.

Anyway, no. She was fine. A few deep breaths and it passed. She stayed put.

Eithne Shortall is an author and journalist. Her debut novel, Love in Row 27, has been published in 13 languages and the TV rights have been optioned by NBC/Universal. Grace After Henry (2018) was an international bestseller. It won Best Page Turner at the UK’s Big Book Awards and was shortlisted for the Irish Book Awards. Her third novel – Three Little Truths – will be published in the UK and Ireland in October, 2019 and in North America in June, 2020.

Where Romance and Pop Culture Live Happily Ever After.
All Posts
PrevPreviousTrope Rec Tuesday: Fairytale Retellings You HAVE To Read
NextFrom Images to Words: Using Pinterest as a Useful Writing ToolNext