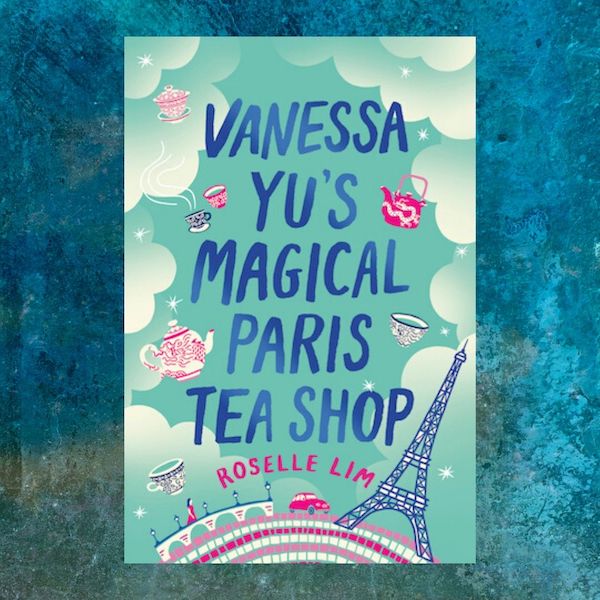 We are so excited to bring you an exclusive excerpt of Vanessa Yu’s Magical Paris Tea Shop by Roselle Lim, out August 4th!

Ever since she can remember, Vanessa has been able to see people’s fortunes at the bottom of their teacups. To avoid blurting out their fortunes, she converts to coffee, but somehow fortunes escape and find a way to complicate her life and the ones of those around her. To add to this plight, her romance life is so nonexistent that her parents enlist the services of a matchmaking expert from Shanghai.

After her matchmaking appointment, Vanessa sees death for the first time. She decides that she can’t truly live until she can find a way to get rid of her uncanny abilities. When her eccentric Aunt Evelyn shows up with a tempting offer to whisk her away, Vanessa says au revoir to California and bonjour to Paris. There, Vanessa learns more about herself and the root of her gifts and realizes one thing to be true: knowing one’s destiny isn’t a curse, but being unable to change it is.

After the ceremony, Cynthia made her way to me. She glanced over her shoulder at the gaggle of aunties congregating in the far corner. “They’re so ready to pounce on you. They told me that they tried to track you down earlier, but you gave them the slip.”

“I hid. I can’t outrun them. At least three of them run marathons,” I said before pointing a finger at her. “You were supposed to stay single. We had a deal.”

Cynthia laughed. “I fell in love. All bets are off then.”

“All kidding aside, I’m genuinely happy for you and Edwin.”

“We’re going on a foodie eating tour of Asia for our honeymoon. I can’t wait to eat everything from Japan to Singapore. I have to show you all the chefs’ tables we’re planning. There were a few I didn’t think I could get into, but Edwin’s cousin pulled some strings. You know you married into the right family when that happens.” She sipped the last of the tea she was cradling in her left hand.

I caught a glimpse of the bottom of her cup. My stomach churned. I stepped back, reaching for the wall for support.

The prophecy solidified in my mouth, bringing with it the bitterness of raw cacao without the added touch of sugar. I didn’t want to open my mouth. I already knew what I was going to say.

In the past, I had tried to swallow prophecies, but the force of the prediction only moved forward, toward its escape through my lips. My jaw ached and my teeth rattled, but I couldn’t stop it.

“You will be divorced next September. He will break his marriage vows with infidelity. The frequent visits to his favorite sushi restaurant is motivated by more than the hamachi nigiri.”

Cynthia dropped her teacup. The sharp shattering sound echoed in the room as it fractured against the floor. She covered her mouth with her hands to muffle her sobs.

She pulled away from me.

The aunties crossed the room and descended upon the weeping bride in a protective formation. Aunt Evelyn and Uncle Michael rushed to my side, ushering me into the makeshift portrait studio, where Jack was waiting.

Tears streamed down my cheeks. I dashed them away with the backs of my hands, but they kept coming. I drowned in a tsunami of remorse for having ruined my cousin’s wedding and her life.

My right eye pulsed as a sharp pain in my temple intensified. A churning nausea rocking my stomach. I leaned into Uncle Michael and closed my eyes. He held me in his arms and allowed me to soak his beautiful charcoal suit jacket. When sorrow ran its course, I was left hiccupping, drinking in the scent of clean linen, bayberry, and my uncle’s aftershave.

He met my gaze and asked, “Are you all right?”

“No.” The instant answer unleashed all the resentment I thought I’d locked away. “It’s a curse despite what everyone says. Look at what I did to Cynthia.”

To supplement my argument, I rattled off a list of incidents. “Remember Mrs. Ferguson, my kindergarten teacher? During my parent-teacher conference, I saw the bottom of her coffee mug and I told everyone about her affair. And what about my prediction of Logan’s ruptured spleen during his championship rugby game? His parents were devastated.”

The extended Yu family had grown inured to my unusual talent because of exposure. Outsiders never understood.

My head felt like it was being squeezed in a vise. With each breath the screw tightened.

“I can’t even imagine what Cynthia is going through right now.”

“I’ll talk to her,” Aunt Evelyn said. “I’ll help her assess her options, and she’ll need to talk to her husband. None of this was your fault, Vanessa.”

“Isn’t it?” I said, rubbing my temple. “Aren’t we responsible for our predictions?”

“We are the messengers. We’re not responsible for the content of our prophecies,” Aunt Evelyn explained. “Look around you. No one is blaming you for speaking the truth.”

Uncle Michael added, “Cynthia won’t hold you accountable for what Edwin might do.”

I wrapped my arms around myself. My manicured fingernails dug into my skin hard enough to leave deep, crescent-shaped marks. Despite my family’s platitudes, the weight of my guilt crippled me. In the aftermath of the prediction, only the thread of bitterness and a piercing headache remained, which I clung to like a lifeline. I drifted, lost at sea, not knowing when—or if—I’d be rescued.

Roselle Lim was born in the Philippines and immigrated to Canada as a child. She lived in north Scarborough in a diverse, Asian neighbourhood.

She found her love of writing by listening to her lola (paternal grandmother’s) stories about Filipino folktales. Growing up in a household where Chinese superstition mingled with Filipino Catholicism, she devoured books about mythology, which shaped the fantasies in her novels.

An artist by nature, she considers writing as “painting with words.”

Where Romance and Pop Culture Live Happily Ever After.
All Posts
PrevPreviousHistorically Yours: Top Historical Romance Picks for May 13th to 31st
NextDaily Frolic: Lady Gaga’s New Album!Next