Fall Into this Excerpt from Wait for It by Jenn McKinlay 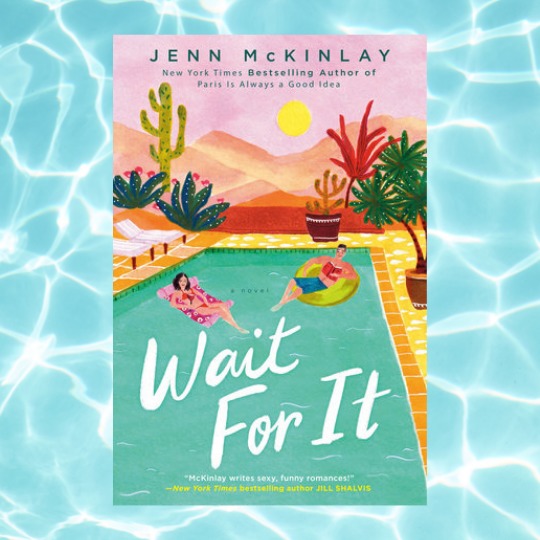 We are so excited to bring you this excerpt from Wait for It by Jenn McKinlay! 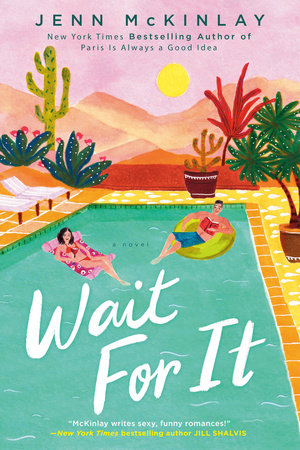 About Wait for It:

A woman looking for a new lease on life moves to Arizona where she rents a guest house on a gorgeous property with a mysterious owner—a man who teaches her about resilience, courage, and ultimately true love, in this funny, bighearted novel about hope and healing from New York Times bestselling author Jenn McKinlay.

Stuck in a dreary Boston winter, Annabelle Martin would like nothing more than to run away from her current life. She’s not even thirty years old, twice-divorced, and has just dodged a marriage proposal… from her ex-husband. When she’s offered her dream job as creative director at a cutting-edge graphic design studio in Phoenix, she jumps at the opportunity to start over.

When she arrives in the Valley of the Sun, Annabelle is instantly intrigued by her anonymous landlord. Based on the cranky, handwritten notes Nick Daire leaves her, she assumes he is an old, rich curmudgeon. Annabelle is shocked when she finally meets Nick and discovers that he’s her age and uses a wheelchair. Nick suffered from a stroke a year ago, and while there’s no physical reason for him not to recover, he is struggling to overcome the paralyzing fear that has kept him a prisoner in his own home.

Despite her promise to herself not to get involved, Annabelle finds herself irresistibly drawn to Nick. And soon she wonders if she and Nick might help each other find the courage to embrace life, happiness, and true love.

One perfectly arched eyebrow rose while he waited for me to figure it out.

“You expected someone else?” he asked.

We were standing in Mr. Daire’s home gym, and I watched as he wiped the sweat from his brow with a towel. I resisted the urge to fan myself as I processed the fact that the hot guy I had seen in the window of the main house was my landlord. My landlord!

My voice trailed off. I was babbling. Mr. Daire was the hot guy! I had not seen this plot twist coming. And now I had to defend my egregious disregard of the rules to him instead of the old duff I had expected to charm silly. Why you gotta do me this way, universe? Why?

“You thought I was half-dead fossil,” he said.

He and Jackson exchanged a look and laughed. I was okay with the fact that they were laughing at me. I would, too, if there was anything about this that was even remotely funny. Jackson’s eyes were kind when they met mine, and it was obvious that he wasn’t the hard ass that Mr. Daire was.

“In my defense, you do have a lot of rules that resemble ‘get off my lawn’ for a guy your age,” I said.

“I like order.” He picked up a water bottle and took a long drink. I tried not to stare at his throat.

“I think you mean you like control,” I corrected him. Did I really just say that? Out loud?

Jackson looked at me with raised eyebrows as if he thought I had a death wish. For the record, I do not.

Mr. Daire rubbed his square jaw with the back of his very large hand. I swallowed, fully expecting him to have his minion cart me out and toss me to the curb.

“Can you give us a minute, Jackson?” he said.

Jackson glanced between us. He didn’t look comfortable with this request, and I wondered what made him pause. Surely Mr. Daire wasn’t a violent man. Nor did I think that I came across as the type of woman who would pull out a gun and shoot her landlord, even if he was a huge pain in the ass. A ridiculously good looking pain in the ass, but a pain in the ass all the same.

“I’m harmless, I promise,” I said with a show of teeth.

Jackson grunted. He stepped close to me and said, in a voice even lower than Mr. Daire’s, “I’m going to the kitchen, but I’ll be right back.”

When the door shut softly behind him, I turned to my landlord and said, “Bodyguard or trainer or both?”

“What makes you think I need a bodyguard?” he asked. He sounded offended. Interesting.

“Given the charm with which you infuse your writings—they’re positively swoonworthy, really—I’m shocked—shocked, I say—that women aren’t lining up outside the gate to be with you.”

To my delight, he barked out a surprised laugh that made me grin in return.

I ignored the way my name sounded coming from his lips. It would only cloud my already hot guy–impaired thinking. I did note the goose bumps that rose up on my skin, in the most delicious way, however.

“Not fearless,” I said. “A tad impulsive and a smidgeon reckless, maybe.”

“Why am I impulsive and reckless?” I asked.

“Because life is short,” I said.

“Doesn’t being reckless make it shorter?” he asked.

I shrugged, pleased to note I was getting my equilibrium back. “There’s a difference between calculated risks and stupidity.”

“All right, I’ll play,” he said. “Would you say hosting a party, jumping into my hot tub, and making noise well past nine o’clock was a calculated risk or stupidity?”

“How do you figure?” he asked. He looked mystified.

“Because I wanted to meet you. And I knew you wouldn’t be able to let such a blatant disregard for the rules go unchallenged, and now here I am, talking to you.”

Jenn McKinlay is the award-winning, New York Times, USA Today, and Publishers Weekly bestselling author of several mystery and romance series. Her work has been translated into multiple languages in countries all over the world. She lives in sunny Arizona in a house that is overrun with kids, pets, and her husband’s guitars.

Where Romance and Pop Culture Live Happily Ever After.
All Posts
PrevPrevious5 Paranormal Romance Series To Read on Webtoon
NextRainbow Youth: 9 Queer YA Stories for Your Summer Reading List by Jeff Adams and Will KnaussNext