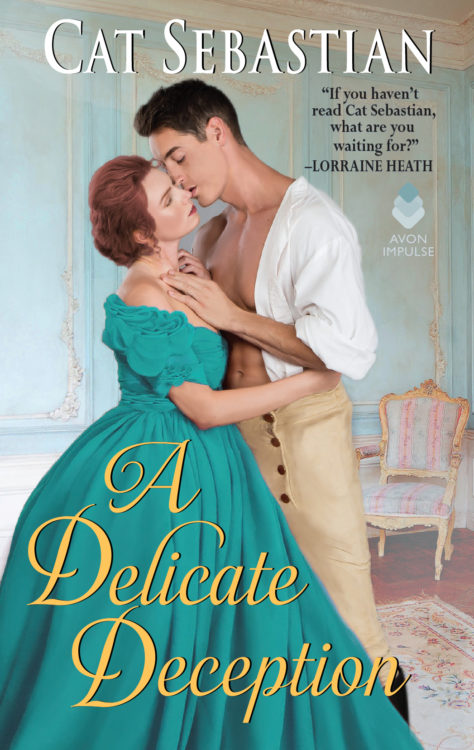 A Delicate Deception is the third book in Cat Sebastian popular Regency Impostors series. Every Sebastian book I have read has been a delight. This one promises to be the same.

About A Delicate Deception, out December 10th:

When Amelia Allenby escapes a stifling London ballroom for the quiet solitude of the Derbyshire countryside, the very last thing she wants is an extremely large, passably attractive man disturbing her daily walks. Lecturing the surveyor about property rights doesn’t work and, somehow, he has soon charmed his way into lemon cakes, long walks and dangerously heady kisses.

The very last place Sydney wishes to be is in the shadow of the ruins of Pelham Hall, the inherited property that stole everything from him. But as he awaits his old friend, the Duke of Hereford, he finds himself increasingly captivated by the maddeningly lovely and exceptionally odd Amelia. He quickly finds that keeping his ownership of Pelham Hall a secret is as impossible as keeping himself from falling in love with her.

But when the Duke of Hereford arrives, Sydney’s ruse is revealed and what started out as a delicate deception has become a love too powerful to ignore. Will they let a lifetime of hurt come between them or can these two lost souls find love and peace in each other?

“Georgiana!” Amelia cried upon entering the cottage. “I met a person unexpectedly, spoke to him, and it wasn’t terrible!”

She already knew she was able to make sufficiently unremarkable conversation. Her years in London had been nothing if not proof that she could talk to virtually anyone without disgracing herself, regardless of how she felt about it. Occasionally, when she had been able to talk to people who had ideas and learning, she had been able to lose her self-consciousness in the thrill of actually talking about something interesting. Those moments had been rarer and rarer with every season she spent in London, as the weight of apprehension crushed any joy she might have once felt.

Furthermore, she was far from unused to men. Amelia’s mother had firmly believed in demystifying the entire gender, and had therefore allowed her daughters to attend dinners and salons far in advance of their official debuts. Amelia had been making conversation with gentlemen since she could string together a sentence. And even though she was far from a sparkling conversationalist, she could get the job done.

“Georgiana?” she called again. “I think I’ve discovered the solution to all that ails me. The trick to graceful social intercourse is to wait until after one’s dog has attempted to murder one’s interlocutor. Do you think they’d let me do that at Almack’s?” She knew she was being absurd, but the fact that she had managed to comport herself in a somewhat social situation, without wanting to run screaming away made her think there might be an end in sight. Perhaps her mind was reverting to something like normal. “We’ll be in London before Christmas, or as soon as I’ve trained up a pack of dogs to do my evil bidding. Georgiana?” But there came no response. She remembered belatedly that Georgiana had taken the pony cart into Bakewell to purchase some things for the house.

Georgiana had been the Allenbys’ governess until the girls no longer required one. The daughter of an impoverished but respectable family, she was an unobjectionable choice as a lady’s companion. That, however, was not why Amelia had asked her to come to Derbyshire.

Georgiana had been a perfectly responsible and respectable governess, but after—well, Georgiana had always been game for what Amelia’s father had once indulgently referred to as her pranks. When Amelia smuggled a kitten into church, Georgiana covered up the animal’s mewls with a feigned coughing fit. When Amelia slipped out of ballrooms to flirt with red-coated officers and moustached fortune hunters and bejeweled widows of ill repute, Georgiana aided and abetted her at every step. When Amelia anonymously published a novel so obscene that it would have sent her to prison if her identity had been discovered, Georgiana demanded an annotated copy. And then when Amelia began publishing much less objectionable novels, Georgiana insisted that all the best villains be named after her.

So after that final incident, when Amelia decided becoming a hermit in the Peak District was preferable to watching her mind come apart at the seams, of course Georgiana had declared herself delighted to come along. It was not meant to be permanent, only a holiday from the circumstances that were quite literally driving Amelia mad. Amelia had thought a few months would do the trick, and then Georgiana could return to town and get another post as governess or finally accept Amelia’s offer of an annuity. But a year had passed, and still Amelia was no closer to feeling ready to return to London. She couldn’t keep Georgiana here indefinitely, nor could she face a future of total solitude. It was no wonder that she had greeted that day’s painless interaction with the stranger as a good omen. 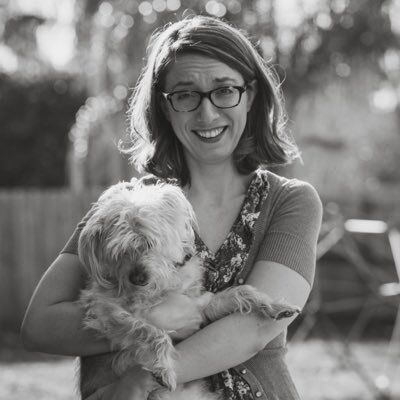 Cat writes steamy, upbeat historical romances. They generally have at least one LGBTQ+ main character and always have happy endings.

Cat lives in a swampy part of the South with her husband, three kids, and two dogs. Before her kids were born, she practiced law and taught high school and college writing. When she isn’t reading or writing, she’s doing crossword puzzles, bird-watching, and wondering where she put her coffee cup.