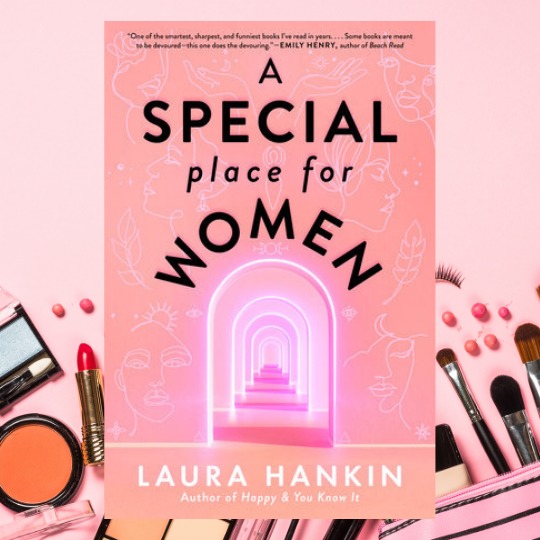 We are so excited to bring you this exclusive excerpt from A Special Place for Women by Laura Hankin, out May 11! 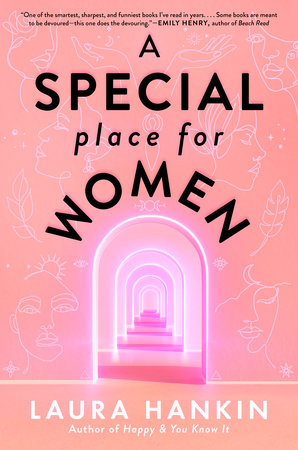 About A Special Place for Women:

It’s a club like no other. Only the most important women receive an invitation. But one daring young reporter is about to infiltrate this female-run secret society, whose bewitching members are caught up in a dark and treacherous business.

For years, rumors have swirled about an exclusive, women-only social club where the elite tastemakers of NYC meet. People in the know whisper all sorts of claims: Membership dues cost $1,000 a month. Last time Rihanna was in town, she stopped by and got her aura read. The women even handpicked the city’s first female mayor. But no one knows for sure.

That is, until journalist Jillian Beckley decides she’s going to break into the club. With her career in freefall, Jillian needs a juicy scoop, and she has a personal interest in bringing these women down. But the deeper she gets into this new world—where billionaire “girlbosses” mingle with occult-obsessed Bohemians—the more Jillian learns that bad things happen to those who dare to question the club’s motives or giggle at its outlandish rituals.

The select group of women who populate the club may be far more powerful than she ever imagined.

And far more dangerous too.

I stumbled out of the restaurant, drunker than I’d planned on getting. The cool night air knocked reality back into me: I no longer had a job. It came in that sudden electric shock of remembrance. You know the one? You manage to forget for a little while that your life has changed irrevocably and then: zap. Your heart sinks, your stomach drops, insert-other-shitty-but-true-clichés-here. Like all those mornings over the past couple months where I’d woken up thinking that I still had a mother, and then had to reorient myself all over again.

God, my finances had already been a mess. All of our savings had gone to medical bills. And all the proceeds from my mother’s house, where I was still living (squatting?) while wrapping up the sale, would go to those bills too. But the money stuff wasn’t the scariest part of Quill shutting down. I could probably get my old bartending job back, from the place where I worked during grad school.

The scariest part was that I had already fallen so far behind on my writing during the years I’d spent caretaking and grieving. Now it was going to be even harder, if not impossible, to catch up. And there weren’t exactly a million stable journalism jobs floating around.

I headed to the subway, feeling lonely, lonely, lonely. Happy for Raf—he deserved all the success in the world—and also resentful, because how dare anyone I knew have success when I didn’t? No, I wasn’t going to become one of those people who just offers themselves up to jealousy like an all-you-can-eat buffet. I was going to figure something out.

My coworkers all had good clips, some contacts at other media outlets. I had exactly one contact: Miles, who’d left Quill for a job at a respected print magazine—the New York Standard—just a couple weeks ago.

Miles probably didn’t want to hear from me. Still, with tequila and rum buzzing in my system, I pulled out my phone and typed up a text to him: Hey there, assume you heard the exciting news about Quill—coffee next week so I can pitch you some stories for the Standard?

I stared at the screen. “Just send the text, bitch,” I muttered to myself, and did.

The train came, its cars sparsely populated at this time of night. I checked the nearest open seat for suspicious liquids and, coast clear, collapsed onto it. Then I took out a leather journal and began to scribble down story ideas, word vomit. Might as well use the hour-long subway commute for something productive. As the train lurched, the thrum of actual vomit started up in my stomach. I took a slow breath to hold it off. No puking on the train. This wasn’t my twenty-first birthday.

As we crossed over into Brooklyn, the door between cars slid open, and a man came through, dragging a bag on wheels behind him. He was middle-aged, with unfocused eyes, wearing a weathered Windbreaker. He sang to himself as he dragged his bag from one end of the car to the other, singing slow and serious, like a hymn. The sweetness of his baritone voice distracted me, so it took me a moment to place the song: “Big Girls Don’t Cry” by The Four Seasons.

My mother and I used to sing that song all the time. We did it to make each other laugh when we were going stir-crazy in hospital rooms, or when we felt hopeless and sharp. And I sang it to her the day we watched Nicole Woo-Martin’s inauguration on TV.

Because even though the establishment candidate had every advantage, somehow Nicole had won. “Mark my words, that woman is going to be president someday,” my mother had said as Nicole raised her right hand and became New York City’s first female mayor, her supportive, schlubby husband at her side. Tears rolled down my mother’s cheeks. She’d spent hours making phone calls to voters on Nicole’s behalf. She’d ordered herself a T-shirt with Nicole’s face on it. “I’m grateful I’m still alive for this.”

“Hey, it’s okay,” I said. When her tears kept coming, I put on my most terrible impression of a Frankie Valli falsetto and began to warble our song.

“This is different, Jillian,” my mother said. “This is history.”

But as I sang the chorus like a cat in heat, her tears turned to laughter. We stood up and shimmied in front of the TV while Nicole smiled in her scarlet peacoat, and the room was incandescent with hope.

Now, as the subway slowed down at the Jay Street–MetroTech stop, the singing man paused by the door. Then he turned his head and stared at me, his green eyes locked on mine, as he continued his song. His eyes looked like hers, so gentle, like they wanted to wrap me in love as he sang our song to me. When the doors opened and he jaunted off the train, I didn’t want him to go.

Because he wasn’t only himself. Somehow, my mother’s spirit had gotten inside of him. She had floated down and attached herself to an unlikely host so that she could see me again.

My phone dinged in the window of belowground cell service, startling me back to reality. A response from Miles. Awful about Quill. How about we meet up Monday for a coffee?

Perfect, I typed back.

I was being drunk and ridiculous. My mother was dead, and whatever spirit she’d had was dead too. Maybe we all had souls while we lived, but they didn’t carry on after our deaths, riding the New York City subway, brushing past Showtime dancers and creeps with their dicks out. There was no need for me to have a mental breakdown. Plenty of women lost their mothers much sooner, or lost much more than their mothers. The fact that the great tragedy of my life so far was losing my mom at age twenty-nine actually meant that I was luckier than most. Big girls don’t cry.

And big girls don’t vomit on the subway either. They unlock their front door, run to the toilet, and hold back their own hair. So that’s what I did.

Excerpted from A Special Place for Women by Laura Hankin, published by Berkley, an imprint of Penguin Publishing Group, a division of Penguin Random House, LLC. Copyright © 2021

Laura Hankin is the author of Happy & You Know It and A Special Place for Women. Her musical comedy has been featured in The New York Times, The Washington Post, and more. She splits her time between NYC, where she has performed off-Broadway, and Washington, D.C., where she once fell off a treadmill twice in one day.

Where Romance and Pop Culture Live Happily Ever After.
All Posts
PrevPrevious5 Historical Romance Novels That Take Place in a Castle
Next9 Ways to Reclaim the Reading Life You Had Before 2020 by Roni LorenNext