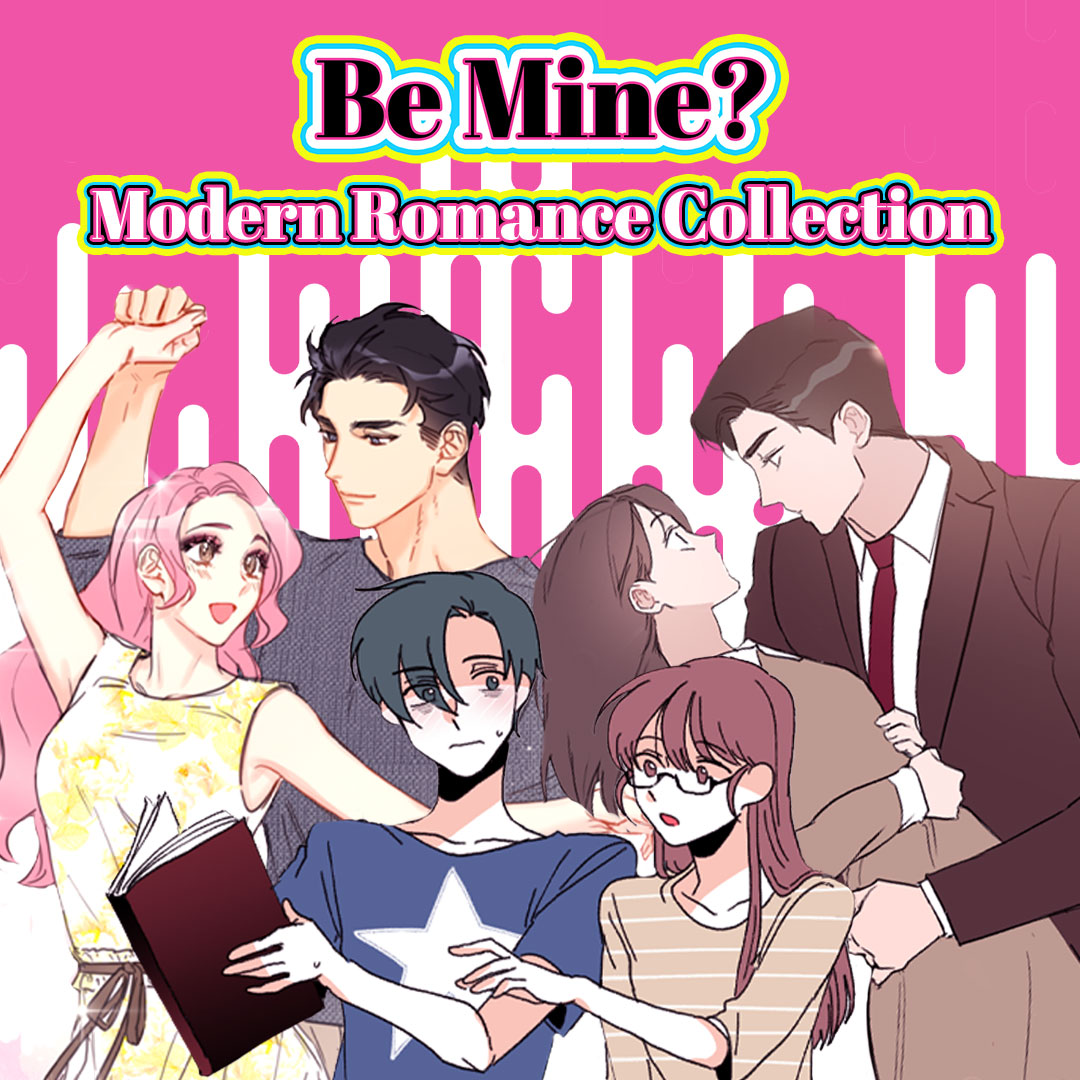 Fall is the PERFECT time to cozy up with a great romance webcomic. Luckily, our friends at Tapas have just released their new Modern Romance Collection! There are SO many amazing titles in this collection. Check out all of these amazing titles below and see which ones catch your eye!

Although Ilene Jung is a popular webtoon artist, she needs another job. A crappy desk job to be exact, one tyrannically controlled by the meanest manager in the world: Jim Kang. He insults her work, refuses to teach her, and even makes her miss an important appointment by forcing her work late on her very first day. To make things worse, when Jim applies to become an artist’s assistant, the artist turns out to be Ilene! In a begrudging twist of fate, she accepts him and the two enter a bizarre working relationship both at home and at the office. How long can it last? Why is Ilene working a desk job? And who’s the boss here anyways?!

Ha-ri made a deal—go on one blind date for her BFF and pretend to be a super-vixen to end all of her unwanted marriage set-ups! Unfortunately, instead of easy money, Ha-ri’s got a headache. Her date is Taemu, her company’s hot new CEO, and he’s got his own plans to get his family to back off by marrying whoever shows up on the date. Should Ha-ri accept his proposal to keep playing pretend? Nothing could go wrong with lying about your real identity while dating the boss… right??

Hell yeah! A major publisher wants Mai Sohn to write a webcomic on relationships. But she’s struck with heartbreak as her girlfriend abruptly dumps her. It’s hard writing about relationships without being in one, so she needs to find the inspiration for love — and find it fast. And what’s up with her possibly homophobic neighbor? Why is she cool with Mai one minute and then so awkward and weird to her the next?! Can’t a girl catch a break?

To Hee-won’s dismay, the BFF she crushed on and her other BFF are now dating! Seriously bummed, Hee-won decides to go wild just one time, and find solace with a handsome stranger. A very satisfying one night affair has now turned into more — she’s pregnant! Fate brings them together again, and now the regimented Doo-joon is determined to do the right thing and marry her. But they’re basically strangers! Except… their bodies have been very intimately acquainted. What’s this mother-to-be to do?

All’s fair in love and war… If you are who you say you are. Meet Avery, the Earl of Baenbowie’s footman. By day, he attends to the household, running errands for the Earl and being teased endlessly by him, too. By night, Avery dreams of the day she can stop pretending to be a boy and finally be the girl under her short haircut and men’s waistcoat. But as her feelings for the Earl keep growing and the Crowned Prince is suspicious of her secret, will she make it to her 18th birthday unscathed?

As an aspiring actress, Wanwan Tang knows how to fake her feelings. But when it comes to superhot, superstar, actor Jian Ning she can’t hide her true feelings about him: she hates his guts! Whether sabotaging Wanwan’s lines or outright ignoring her existence, Jian has been nothing but rude to her. Yet, much like the movies they star in, there’s more to Jian behind the scenes. Is he really this rude? Or is it all just an act?

In the criminal justice system, there are people behind the scenes who investigate the crimes. Iris is a compassionate, smart, and dedicated cop. Rhys is a brusque yet genius criminal profiler. These two separate but equally important colleagues find themselves at the intersection of a complicated past and more complicated present. These are their stories.

They consider themselves the best of friends… but that’s not how everyone sees them. He’s a friend who’s a boy. She’s a friend who’s a girl. That’s all! But still… there’s something about their relationship that’s hard to describe. What will become of these two “friends?”

The Lady and Her Butler

The last thing Sooha wants in her life is a man. She’s sick of it all—her mother calling about boyfriend problems, friends trying to set her up on dates, girls waiting for their Prince Charming… it’s too much! But when a homeless man offers to keep house in exchange for temporary residence, Sooha finds herself saying yes to a man for the first time in her life. After all, who wouldn’t want to come home to warm dinners, clean sheets, and freshly ironed clothes?

Something is going bump in the night!… and also thud and stomp and MORE bumping! Then Sung-eun literally bumps into the reason for all the noise: her handsome and charming neighbor, Eun-sung. The two of them share a similar name, the same major, and so many classes, but Sung-eun doesn’t immediately realize they share the same housing. The two hit it off pretty quickly, but some things don’t add up… What secrets will they discover about each other? Time to put one plus one together…

After Jade’s childhood friend and boyfriend comes to terms with his sexuality and breaks up with her, she stumbles to a nearby park feeling lost and alone. There, she meets a stranger who listens to her story and offers her a place to crash for the night. The handsome stranger is Nathan, a silent and puzzling man who has a tendency to pick up strays from the street.

Marie Lee is a 23-year-old college dropout with terrible luck in romance. She spends her days working at a coffee shop, crushing on her boss and daydreaming about the future. Enter Anthony: he’s tall, confident, and absolutely stunning in heels. When he starts coming to her cafe, Marie finds that her world is quickly changing. Anthony may be different from other guys, but eh, screw gender roles.

Alec has the ability to see the marks that connect soulmates. With the help of a friend he sets out to help people meet the love of their life – while still learning about the various faces of love, relationships and people. All while trying to make sense of his own feelings.

A comic about getting yourself a boyfriend. Or multiple boyfriends.

In his first year of high school Jamie, a young hopeless romantic bumps into Aiden, a socially inept pretty boy who easily steals his heart. He decides to pursue a relationship with Aiden and in the process makes unforgettable friendships. However, his impact on the group dynamic creates a rippling effect that changes everything.

When a gentle giant meets a small ball of energy, only love can bloom. A sweet love story about the advantage and disadvantage of being tall and small.

Jasper meets Kai, a boy who doesn’t speak. Will they find a way to communicate the feelings they both have?

The Poem of Aster and Hana

High schooler Hana Kim channels her pain and angst by leading a secret life as Sparrow, the live streamer! In her vids, she shares her love of poetry yet never her own face, because — let’s be honest — people are the worst, especially on the internet. Her cherished anonymity is broken when her classmate Aster discovers her private life and wants to get closer to her. Will she keep her distance from him? Or will she let down the walls she built to protect her heart from life’s cruel realities?

To an outcast like Yeon Wu, her first crush was a mysterious man named Ming Gi Nyu who emotionally supported her when she was at her lowest. However, as Yeon Wu enters college, she wants to forget all about him. The only problem is Ming Gi Nyu is not ready to let her go…

The Lady with a Mask

By day Viola Lim is a secretary, but by night she’s secretly a children’s storybook author under the pen name Violet. Too talented to be just an office worker, she created The Child with A Mask to escape her terrible boss, Harrison Kwon. Sure, he’s attractive, intelligent, but he’s also super rude! And now, he wants to find the creator of the book. How long can she keep her identity secret? And why does her boss want to meet her…

There’s a crazy dog at Sungwoon Publishing Company. It has an expressionless face, a monotone voice, cold and dark eyes, and a difficult personality. Its name is Woojoon Seo. But is this man really crazy? Taeryung is exhausted from love, work, and even her her own family. To the tired Taeryung, Woojoon’s gentle and tender actions seem more like of a loveable pet than of a crazy dog. She doesn’t know what to make of him! At times, he seems like a loyal doberman and others, a cute maltese. What’s a girl to do?

Where Romance and Pop Culture Live Happily Ever After.
All Posts
PrevPreviousSeriously Fun Second Chance Romances
NextGet in the Halloween Spirit with these Paranormal Romance Titles by NJ WaltersNext