Like many narrators, I have a pseudonym.  Of the 300 titles in my portfolio, I’ve narrated about 50 audiobooks under another name.  Why? How do I know when a book falls into “her” territory? What’s the protocol regarding narrator pseudonyms, especially when it comes to “outing” them?

First, let’s just acknowledge that many of the authors in the world of romance write under pseudonyms. At author events I’ve attended, everyone agrees to call authors only by their pen names, and it’s all part of the fun. It’s also a way to claim artistic freedom, and to separate the author’s work from her personal life or her work in other professions.

Romance narrators use a pseudonym for many of those same reasons, plus one that is unique to what we do:  we are all independent freelancers who want to be free to work in many different literary genres for as many different publishers, producers and authors as we can.  I know narrators who have separate names for their work in children’s audiobooks, Amish romance, Christian fiction, etc simply to keep those portfolios consistent and focused on a particular audience.

My alter ego was born when I was offered a three-book series by a major publisher for whom I hadn’t worked yet.  I was sent an advance copy of the first book, and I did the Ctrl+F test as I do with all books I’m offered. I open the PDF, hit Ctrl+F, and search for certain telltale words that take me right to any intimate scenes.  I read through the scenes and make sure the sex is consensual (if it’s not, I turn down the project unless the author is exploring sexual trauma in a responsible way).  This series went right up to that line and was the first BDSM content I had ever encountered in my work. I asked the producer if it would be ok to use a pseudonym and he said sure, just let me know the name and we’ll inform the publisher.

Coming up with a name is fun but also something narrators should be intentional about, because once you create a pseudonym, you are actually creating another brand, with her own portfolio, marketing, and social media.  I looked up the name I was thinking of online, to make sure there wasn’t another narrator already using it. After doing my due diligence, I settled on a combination of my high school Spanish class name with a wild-animal-inspired last name, and wham-bam, I was an erotica narrator.

I’m proud of my avatar’s portfolio.  She’s won AudioFile Magazine’s Earphones Award on a couple of occasions, and even shared an Audie Award (often referred to as the Oscars of Audiobooks) for best Erotica narration in 2017, along with co-narrator Sebastian York, for Marriage Games by CD Reiss.  Before 2017, I was much more strict about keeping the two identities separate. After the awards, and since my kids aren’t little anymore, I relaxed about it, especially in closed, well-moderated facebook groups like Aural Fixation and Talk Dirty To Me.  These days it’s pretty easy to connect the dots if you’re even an amateur Googler. Still, I’m not mentioning her name in this article because I want to emphasize a really important point:

Narrators have pseudonyms for a reason.

It’s important to remember that whether or not to reveal the connection is the narrator’s prerogative.  Some are really open about it.  Others can be damaged personally or professionally if they are outed.

Well-meaning fans sometimes get so excited to discover a whole new list of titles by their favorite narrator that they want to share their discovery.  While completely understandable, outing a narrator’s pseudonym can have pretty serious consequences. Some guidelines:

Next month, I’m turning things over to my avatar, who’s going to tell you all about the challenges and the deliciousness of narrating explicit scenes.  Until then, happy listening! 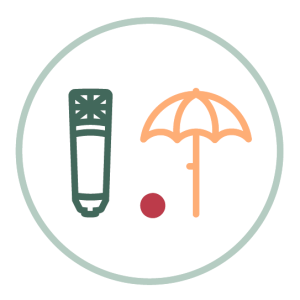 Andi Arndt is the narrator of hundreds of audiobooks in romance, bio/memoir, YA and literary fiction, and is a member of the Audible Narrator Hall of Fame.
All Posts
PrevPreviousSaved by the Page! Interview and Exclusive Excerpt
NextFour Fairy Tale Romances Available on Kindle UnlimitedNext