Office Ladies Podcast and the Enduring Popularity of The Office 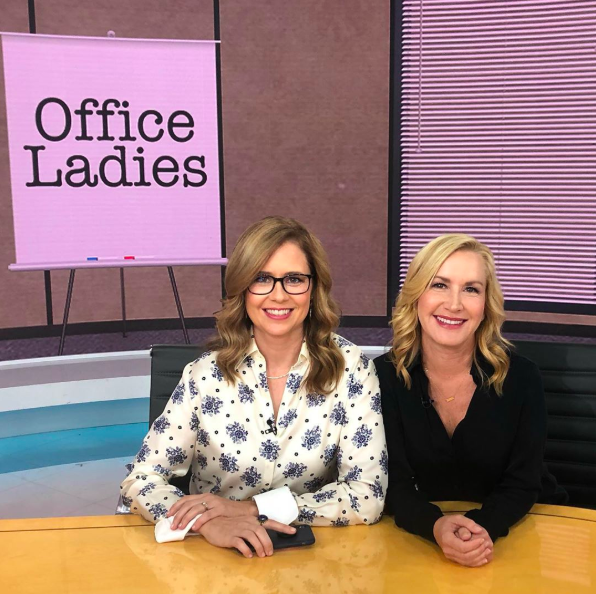 About a month ago, I was sitting in my local coffee shop, working on an article for Frolic. A nearby table was packed with high school kids meeting up for some sort of project or study group, and then I heard one of the teen boys above the others.

He clapped his hand on a friend’s shoulder, looked them in the eye, and with utmost seriousness said four words as though he were the first person ever to utter them. “Bears. Beets. Battlestar Galactica.”

Almost fifteen years after its premiere, The Office still has the power to make people laugh for the first time at its jokes, references and wacky characters. I remember having viewing parties for new episodes with friends when I was in high school, and it’s incredible to realize that high school kids and adults today are still appreciating and discovering this comedy.

Luckily for old and new fans of The Office, two of its stars have started a re-watch podcast! Office Ladies is a podcast run by Angela Martin (who played Angela) and Jenna Fischer (who played Pam). Each episode of the podcast covers an episode of The Office from the very beginning.

One cool thing about Office Ladies is that the hosts have a unique insider/outsider perspective. Obviously they’re “insiders,” because they were part of making every single one of the episodes they discuss. But they’re “outsiders,” because they’ve never really watched the show for entertainment like the rest of us have!

Angela and Jenna’s specific points of view make this re-watch extra fun, because they include tidbits about filming, office props, audition stories, and so much more.  It tickles me every time they say that they texted a former coworker to ask who wrote a joke or what they recall from filming specific episodes.

So, if you’re like me, and Office Ladies makes you want to revisit The Office, I figured it was worth examining some of the things that keep us coming back to Dunder Mifflin again and again!

First and Foremost: The Awesome Cast of Characters

The Office pulls of something fascinating: its characters seem to be both cartoonish and very, very real.

For example: Who among us hasn’t met an odd, intense person in a work or customer service environment who makes you think, “Wow, they are SUCH a Dwight?” Or perhaps you’ve sat in a conference meeting that goes on too long, and you wish there was a camera to look at sarcastically a la Jim Halpert?

The employees of The Office are far from perfect, but that’s what makes them feel like actual people. The cast isn’t populated with freakishly good-looking established superstars, but it’s full of people who are likely to remind us of the cast of characters in our own everyday lives. Everyone has their own quirks on The Office: from Stanley’s crosswords to Pam’s choice of Jellybeans to Dwight’s increasingly bizarre beet farm backstories, each character is so well-drawn that they feel like they could be viewers’ real friends and colleagues!

It Holds Up A Mirror To Everyday Life

During my latest binge through the middle seasons, I’ve come to realize that The Office is one of our culture’s top most-re-watched shows because it holds up a mirror to both the micro everyday occurrences and macro societal issues that we live through.

On the micro level, it makes those of us in average day-to-day jobs feel seen and appreciated.

Your cubicle neighbor won’t stop humming? Soothe your spirit by watching the clip of Jim hiding Andy’s phone with a Rockin’ Robin ringtone in the ceiling tiles!

However, The Office doesn’t get nearly enough credit (in my opinion) for the ways it holds up a mirror to bigger cultural issues. To be clear, I’m not talking about how the show handles sexual harassment or diversity issues—always do the opposite of whatever Michael Scott does in these cases!

Rather, it’s fascinating to witness how The Office included plotlines of company insolvency and mergers during the immediate aftermath of the 2009 housing market crisis and recession. It turns out The Office is a perfect comedy vehicle to explore personal and cultural issues!

Jim and Pam! Dwight and Angela! Michael and Holly!

There are so many great couples to watch and root for on The Office. Of course, as the Office Ladies mention in their early episodes, Jim and Pam are truly the heart of the show. Their will-they-or-won’t-they dynamic created romantic tension in early episodes, and a realistically lived-in love story in later seasons.

The Office doesn’t stop there, though! We get the secret love between Dwight and Angela and Michael Scott’s transition from an emotionally abusive relationship with Jan to a fulfilling perfect match with Holly.

For romance fans, there are PLENTY of episodes to return to whenever you need a lovey-dovey tv couple!

Whether you’re a long-term fan or someone new to the daily routine at the Scranton branch, I think we can all agree that The Office has a special cultural appeal. And now we have extra special Office Ladies to help us reflect on one of the most-loved comedies of the early 2000’s!

Erin Phelps is a lover of swoony romance novels, superb television and movies, and splendid comedic podcasts! In addition to writing for Frolic, Erin works at a fun customer service-oriented job at a salon. Sometimes, she can even be found teaching Women’s and Gender Studies at her local college! Her love language is well-constructed pop culture references and her favorite treat is a caramel latte.
All Posts
PrevPreviousDaily Frolic: The American Music Awards are this Weekend!
NextA Side-By-Side Comparison of Noah Centineo’s On-Screen RelationshipsNext