Perfect for a Full Moon: An Excerpt from For the Wolf by Hannah Whitten 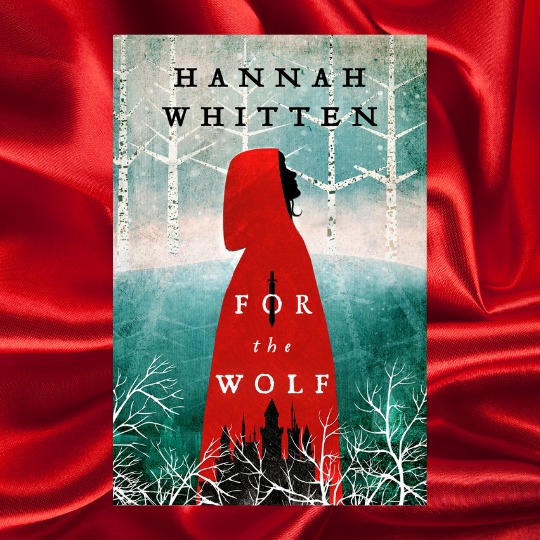 We’re so excited to bring you this exclusive excerpt from For the Wolf by Hannah Whitten! 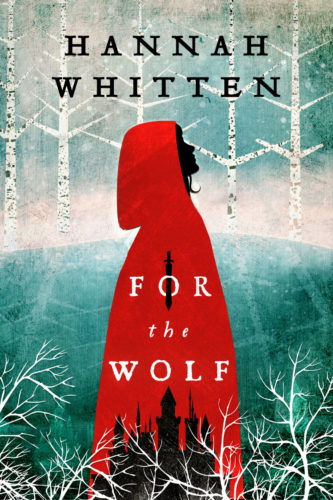 About For the Wolf:

For fans of Uprooted and The Bear and the Nightingale comes a dark, sweeping debut fantasy novel about a young woman who must be sacrificed to the legendary Wolf of the Wood to save her kingdom. But not all legends are true, and the Wolf isn’t the only danger lurking in the Wilderwood.

As the only Second Daughter born in centuries, Red has one purpose—to be sacrificed to the Wolf in the Wood in the hope he’ll return the world’s captured gods.

Red is almost relieved to go. Plagued by a dangerous power she can’t control, at least she knows that in the Wilderwood, she can’t hurt those she loves. Again.

But the legends lie. The Wolf is a man, not a monster. Her magic is a calling, not a curse. And if she doesn’t learn how to use it, the monsters the gods have become will swallow the Wilderwood—and her world—whole.

Red’s eyes flickered over the iron as she nervously wiped her hands on her torn skirt. If there was a latch, it was too small to see. No hinges, either—the gate was one unbroken piece of iron. It rose to two swirling points, as if to mark an entrance, but the bar down the center was as solid as the rest of it.

“Kings on shitting horses.” Teeth bared, Red slammed her hands against the metal. She’d made it through a fanged forest, she could find a way to open a damn gate.

A rustle. Red glanced over her shoulder. Only two of the white trees were visible in the gloom, but both of them looked closer than they had before.

Red tried to lift her hands to pound on the gate again, but they wouldn’t obey. Her palms refused to move, like they’d somehow grafted onto the iron. Sliding in the leaves, Red tried to wrench free, but the gate held her fast, the rasp of her breath loud in the silent fog.

She felt the trees’ regard, heavy on her shoulders, lifting the hair on the back of her neck. Watching. Waiting. Still hungry.

Something shifted under her hand, breaking the cycle of shapeless panic, crystallizing it into sharpened, focused fear.

The surface of the gate was moving, slithering like she’d cupped her hand over an anthill. Rough metal rippled against her skin, tracing the lines in her palms, her fingerprints.

As suddenly as it started, the crawling feeling stopped. The solid bar of iron split slowly down the middle, bottom to top, like a sapling growing from the ground. With a quiet hitch, the gate fell open.

A moment’s pause, then Red stumbled forward. As soon as she was through, the gate closed behind her. She didn’t have to look to know it was solid again. When she peered at her palm, it was unblemished but for a few spots of rust.

The ruined castle rose from fog and shadow, reaching almost as tall as the surrounding trees. Once, it might’ve been grand, but now the walls looked to be more moss than stone. A long corridor stretched to her left, ending in a jumble of broken rock. Directly ahead, a tower speared the sky, a weathered wooden door in its center. What looked like a large room was built onto its right side, in considerably better repair than the corridor. Crumbling piles of stone dotted the landscape—remnants of collapsed battlements, fallen turrets.

No white trees grew past the gate.

The tremble in her legs steadied. Red wasn’t sure what safety looked like here, but for now being away from the trees was enough.

The slice on her cheekbone still stung. Hissing, Red gingerly touched the cut. Her fingertips came away stained with watery blood. Ahead of her, the weathered door loomed.

He was somewhere in there. She could feel it, almost, an awareness that pricked at the back of her neck, plucked at the Mark on her arm. The Wolf, the keeper of the Wilderwood and alleged jailer of gods. She had no idea what he’d do with her now that she was here. Maybe she’d escaped his forest only to be thrown back in, the Wolf making sure the bloodthirsty trees finished whatever they’d started.

But the only other option was to stay out here, in a chilled, unnatural twilight, waiting to see if the iron gate would be enough to hold the Wilderwood back.

Well, damn the myths. She was just as much a part of those stories as he was, and if her destruction was imminent, she’d rather be the architect than a bystander. Hitching her bag on her shoulder, Red strode forward and shoved the door open.

She expected darkness and rot, for the inside of the castle to look as uninhabited as the outside. And it would have, were it not for the sconces.

No, not quite sconces—what she’d thought was a sconce was actually a woody vine, snaking around the nearly circular walls. Flames burned at equidistant points along its length, but the vine itself wasn’t consumed, and the flames didn’t spread farther. She couldn’t even see char marks, as if the flames were simply being held there, anchored to the wood through some invisible bond.

However strange the light was, it illuminated her surroundings. She stood in a cavernous foyer under a high, domed ceiling.  A cracked solarium window filtered twilight over her feet. Emerald moss carpeted the floor, clustered with toadstools. Before her, a staircase, moss covering the first few steps, leading up to a balcony ringing the top of the tower. She could barely make out the impression of vines through the shadows, twining over the railing, dripping toward the floor. The corridor she’d seen from outside stretched to the left of the staircase, and the sunken room to the right, its arched entrance broken at the top.

All of it was empty.

Red’s boots made soft shushing noises against the moss as she stepped forward. When she looked more closely, there were signs of occupancy—a dark cloak hung on the knob of the staircase, three pairs of scuffed boots sat by the broken archway into the other room. But nothing moved in the ruin, and everything was unnaturally silent. Red frowned.

Behind her, a light blinked out. Slowly, Red looked over her shoulder.

Another flame along the strange vine extinguished.

She almost tripped in her haste toward the staircase, noting as she put her foot on the bottom step that there was no light up there at all. Red backpedaled, changed direction, wheeling around the stairs. Light glimmered ahead of her, flames lining another staircase, this one leading down instead of up. Red ran toward it, the room around her plunging rapidly into twilight.

The last flame blinked out as she reached the stairs. She paused, breathing hard, waiting to see if the lights before her would do the same. But the flames remained upright and glowing, lit along another strange, unburnt vine.

The carpet of moss covered the first few steps here, too, but soon it gave way to thin roots, crisscrossing over the stone like veins. Red kept her eyes on her feet to keep from tripping, counting her steps as a mainstay against panic.

The stairs ended on a small landing, housing a wooden door and nothing else. Red pushed it open before she could talk herself out of it.

It didn’t creak. Warm, friendly light flooded the edges of the door, seeped onto the landing like a rising sun. Red stepped in as silently as she could. She froze, familiarity first a blade, then a balm.

Back—she stopped herself before she thought the word home; it would hurt too badly and didn’t feel wholly accurate, anyway— back in Valleyda, the library had been one of the places she spent the majority of her time. Neve had lessons most days, things beyond the simple writing and arithmetic Red had been taught, so Red was left largely to herself. She’d read most everything in the palace library, some things twice. It was one of the few ways to soothe her mind when it started churning and spilling over itself, connecting fears in spiderwebs she couldn’t disentangle. The scent of paper, the orderliness of printed words, the sensation of page edges beneath her fingers smoothed the waves of her thoughts to placidity.

Most of the time, anyway.

The presence of books was really the only similarity between the palace library and this one. Overstuffed shelves stood in straight rows. Books cluttered small tables, and a pile of them stood precariously by the door, topped with a half-full mug of what smelled like coffee. Candles with strangely unwavering flames gave the room a golden glow—wait, not candles. Shards of wood, curiously unburnt, same as the vine above.

Her bag fell to the floor with a muffled thunk. Red held her breath for half a second, but nothing stirred in the stacks. The sound she made might have been a laugh had there been more force and less fear behind it. A library, in the depths of the Wilderwood?

Cautiously, she stepped forward, trailing her hands over book spines. The scent of dust and old paper tickled her nose, but there was no trace of mildew, and all the books seemed cared for, even the ones that looked impossibly old. Someone was minding this library, then. Much better than they seemed to be minding the rest of the castle.

Most of the titles she recognized. The palace library carried a renowned collection, second only to the Great Library in Karsecka at the southernmost tip of the continent. Monuments of the Lost Age of Magic, A History of Ryltish Trade Routes, Treatises on Meducian Democracy.

Up and down the rows she wandered, letting the familiar sights and smells of a library seep the broken-glass feeling from her eyes. She was almost calm when she reached the end of the fifth row.

Then she saw him.

Red’s breath came in a quick, sharp gasp, ripping the quiet in two. She pushed her hand against her mouth, like she could force the sound back in.

The figure at the table didn’t seem to notice. His head bent over an open book, hand moving as a pen scratched over paper. The lines of his shoulders spoke of strength, but that of only a man rather than a monster; the fingers holding the pen were long and elegant, not clawed. Still, there was something otherworldly in the shape of him, something that hinted at humanity but didn’t quite arrive there.

“I don’t have horns, if that’s what you’re wondering.”

He’d turned while she was staring at his hands. The Wolf narrowed his eyes. “You must be the Second Daughter.”

Hannah Whitten has been writing to amuse herself since she could hold a pen, and sometime in high school, she figured out that what amused her might also amuse others. When she’s not writing, she’s reading, making music, or attempting to bake. She lives in Tennessee with her husband and children in a house ruled by a temperamental cat.

As an Amazon associate, we earn from qualifying purchases.

Where Romance and Pop Culture Live Happily Ever After.
All Posts
PrevPreviousTen Hot Reads for June
NextThe Top 10 Young Adult Reads for June 2021Next