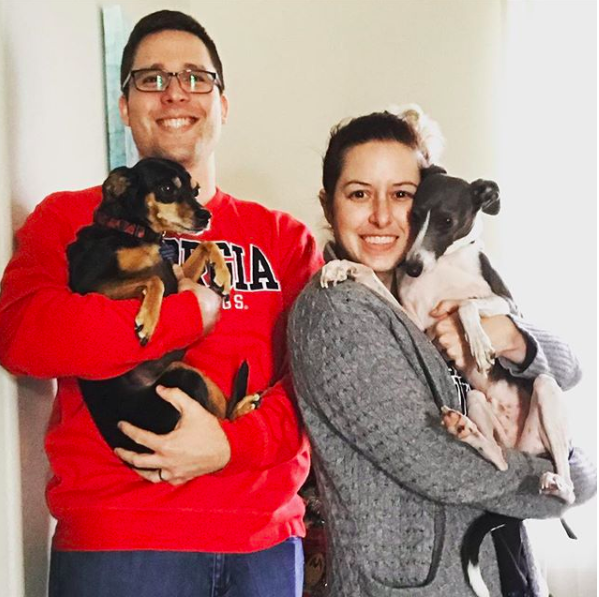 [Note from Frolic: In honor of Valentine’s Day we have 4 of your favorite author’s writing about their very own meet cutes! First up is K.A. Linde!]

Welcome to my favorite meet cute—my own! I’m so excited to write this short for you to introduce you to me and my husband when we first met as graduate students at the University of Georgia.

“What do you mean they’re only letting the male graduate students meet the prospective students?” I raged to my friend, Beth.

I saw red. I swear this society was going to be the death of me. How did they think it was acceptable to bring out new students for our program and then only introduce them to male students? That was just…insane.

“Well, fuck that,” I spat. “Not happening. Where are they going?”

Beth shrugged. “I think they’re at lunch or something.”

“I will wait it out. They did this last time too, and I’m still livid.”

So I waited. Because I knew the jerks would come back from lunch sans a single female student and act like it didn’t even matter. If I had to complain to faculty one more time, I was probably going to have a conniption fit.

Beth and I worked through our statistics homework as we waited. At some point, she stood and went to find her boyfriend who was there to pick her up to go out for lunch. I was glad that I’d eaten before coming onto campus.

A commotion drew me away from my statistics and I raised my head from the blur of numbers to find people entering the grad lounge. I recognized the first two people immediately—Henry and Cooper. They were laughing about who even knew what. Henry was a year ahead of me in the political science program. While Cooper was getting his Masters concurrently with his Bachelors.

I craned my neck, anxious to see the potential new student. I hadn’t heard anything about them. I didn’t even know if they were a guy or a girl.

But the person following them was definitely a guy.

He was tall with dark brown hair and square-rimmed glasses. He was dressed to impress for his trip in a button-up rolled to his elbows and khakis. His eyes flicked to mine, disinterest flipping on a dime. A half-smile curves his lips. I was stuck on that look as the rest of the room disappeared.

Then Henry and Cooper ushered him into a seat at the center table I was sitting in and bombarded him with more questions.

A split second later, I came back to myself, remembering my mission. I didn’t want the trip to seem like there were only dudes in our program. After all, I was here.

“So, were you guys going to introduce me or what?” I drawled.

Cooper laughed and stuck his hand out. “This is Kyla. Kyla this is Joel. He came in all the way from Nebraska.”

He shrugged one shoulder, glancing down at the table before answering. “Yeah.”

“Why did you apply to Georgia?”

“I know Monroe,” he said, mentioning one of our Congress scholars. I’d taken his class in undergrad and he was one of my favorite professors. “Plus, it beats the snow when I toured Champagne-Urbana.”

“That is a fact. I hate the cold.” I leaned forward, ignoring the looks from Henry and Cooper. “So does that mean you’re here to study Congress?”

He nodded. His eyes finally meeting mine again. Light honey brown with a tinge of gold that caught the light. There was something about him. I could tell he was introverted immediately, but when his lips turned up at a question, I could practically see the sarcasm waiting to burst forth.

“Me too,” I said. “Well, I love campaigns. But Congress has more data.”

But I wasn’t listening to them. I was stuck on the new guy. Joel. He was cute. Definitely cute. It probably shouldn’t have been my first thought when trying to convince him to come to the University of Georgia to complete is PhD, but hey, I wouldn’t mind it one bit.

“So…did you decide if you’re coming to Georgia?” I asked.

Henry and Cooper sent me a sharp look as if we weren’t supposed to ask that. Which I might have known if they’d actually included me in the plans for this event.

But I just waited for Joel’s answer.

He met my gaze again. And for a split second I swore those eyes said, ‘Keep looking at me like that and I’m definitely coming here.’

Then he looked away with that same half smile, the light reflecting off of his glasses. Clark Kent waiting to become Superman. And said, “I haven’t decided.”

Three years later, we were engaged.

Four years later, we were married.

And we lived happily ever after.

K.A. Linde is the USA Today bestselling author of the Avoiding Series, Wrights, and more than thirty other novels. She has a Masters degree in political science from the University of Georgia, was the head campaign worker for the 2012 presidential campaign at the University of North Carolina at Chapel Hill, and served as the head coach of the Duke University dance team. She loves reading fantasy novels, binge-watching Supernatural, traveling, and dancing in her spare time.

She currently lives in Lubbock, Texas, with her husband and two super-adorable puppies.

Where Romance and Pop Culture Live Happily Ever After.
All Posts
PrevPrevious#MerchMonday: Be Your Own Valentine With These Pampering Products
NextHere Are Your Valentine’s Date Night Ideas!Next