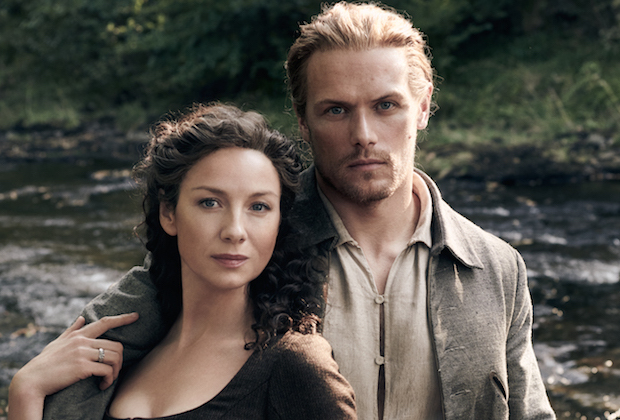 Those words went through my mind thinking about the closing shot of Outlander’s “The Ballad of Roger Mac.” I mean, seriously, Roger is hanging from a tree, a rope around his neck, his fingers jammed between his throat and the thick knot choking the life from his body. So, yeah, I was looking forward (odd way of putting it) to this new episode and how the producers were going to save him. Because–this was not the end of Roger MacKenzie. No freaking way!

With social distancing, isolation, ZOOM book launches, and posting my efforts at photo-op friendly meals (a failure, by the way), I was excited to watch the new episode of Outlander, knowing the worse thing possible would be corrected.

But damn those writers, they couldn’t just let Roger be all better. They had to muck it up with a recovery that resonated, making his close-call a painful journey back to sanity.

We begin in 1969 at Oxford University, where Roger is teaching a class about last words. Brianna slips into the back of the room, watching her man do his thing. He is admonishing the class for the poor results of a recent homework assignment on Famous Last Words. Roger is of a mind that last words outlive the dead.

The writers of this episode decided to have some fun (if that’s what you want to call it) and use the silent movie framing for flashback scenes of the hanging. The dialogue is written on the screen, the footage is black and white, and the sound of the old-time movie reel churns. In silence, Claire works to save Roger’s life, getting him breathing normally again. Brianna pleads tearfully for her husband to open his eyes. Roger lays silently on the ground staring at the sky.

Three months later (we know this because the screen tells us so), we’re no longer playing in the world of silent films. Claire is examining Roger’s throat. We learn Roger hasn’t tried to speak since the hanging. Brianna is teasing him about words she’ll teach Jemmy that won’t be to his liking. Her effort at minimizing the horror of Roger’s predicament fails.

Meanwhile, Roger is filmed through a hazy camera lens, the edges are blurry, and the flashbacks use the silent motion picture approach.

Brianna and Claire talk about the men they’ve known who survived the war with broken spirits and minds. Vietnam and World War II didn’t have the phrase PTSD, per se, but both women have seen men with what Brianna calls the thousand-yard stare. Roger is drowning in silence, she says, and she is afraid her husband is lost to her. Claire advises her to have faith, and she will find him.

There is quite a bit of singing in this episode. Jocasta sings while visiting the grave of Murtagh Fitzgibbons (he was killed last week in a heart-stopping, tragic scene). She and Jamie reminisce about the man they both loved dearly. (I must admit I am still in shock over the suddenness of Murtagh’s departure). They wish each other farewell, and Jocasta and Hercules depart, returning to River Run. Jamie settles himself on the porch and sheds more tears (I hear you, man!) for the deceased Murtagh.

Roger’s flashbacks continue in black and white and silent filmdom. These scenes are quite unsettling, and the choices made by the filmmakers ratchet up the discomfort, pain, and agony we can only imagine Roger is experiencing. He is caught in a cycle of hell he can’t escape or heal himself.

Lord John gives Bree a gift to help her tell time. The lesson he shares is for Bree to have patience, give Roger the time he needs to come back to her.

Jamie is drinking through his grief over Murtagh and seeks the solace of his wife’s wisdom. She tells him that time, they say, heals all wounds.

Many more weeks pass. Claire and Jamie visit Brianna and Roger, who has a new hobby, building things (and pounding on things, tormenting Jamie and his hangover). Roger still doesn’t speak, by the way.

The two couples settle down to enjoy some tea, but while the hot water heats on the stove, Jemmy comes too close and Roger, seeing the danger, shouts, making a croaking sound, to get the child’s attention. This stops the baby, but the others in the cabin are stunned as well.

The bottom line, however, Roger spoke. Brianna is ecstatic, but Roger is not ready to make this speaking thing a habit, and he physically retreats.

An aside: Richard Rankin performs beautifully in silence. His expressive eyes, brows, lips, nostrils, and body movements are brilliant.

Now, who knew that Sophie Skelton could sing? Clementine gets quite the run during this episode. Outside their cabin, Roger listens, and although he tries to finish the woodwork, the sound of her voice breaks him, and he weeps.

In the woods, Jamie and Claire are playing with Jemmy when there’s a rustling in the trees. Moments later, a wild boar attacks, and Jamie prepares to fight the creature with a stick, but an arrow from the bow of Young Ian saves him! Yes, Ian is back!

Back at Fraser’s Ridge, we witness the special bond between Roger and Ian (Ian’s sacrifice saved Roger). They embrace, but still, Roger can’t express himself with words. The reunion is heartfelt, but we also notice that Young Ian is not the same man he was before.

Marsali and Roger are playing cards, and somehow, she keeps drawing the ‘hangman’ card for Roger. This takes Roger immediately back to the hanging, and the silent film plays in his mind. Bree begs him to speak to him.

She acknowledges his voice is his gift and reminds him that the went through hell, too. But she keeps it together because of her love for him and Jemmy. He needs to snap out of it, but Roger won’t even look at her. She pleads with him, are you going to fight for us? He does not respond.

Later that evening, at dinner, the family gathers, minus Roger. During the meal, it becomes clear that Young Ian is suffering from something, but he is reticent. The subject changes to Roger’s land from Tyron, and whether Young Ian might accompany Roger to survey the land.

Alone, Roger is strumming his guitar and mumbling the lyrics to Clementine, but he can’t get past the flashbacks, the memories of the pain, and the fear of hanging from that tree.

We don’t know what’s going on inside Young Ian’s mind, but it’s clear he is suffering. Jamie comes across him lying on the wood planks on the floor instead of in the bed. He’s uncomfortable in Jamie Fraser’s grand house. Jamie asks him what happened to him with the Mohawk. Ian says he can’t tell him the truth of it yet. He doesn’t have the words. Jamie is “heartsick, seeing him troubled so.”

The actress who plays Marsali is so authentic in her portrayal. I adore her scenes. In the one with Ian, she admits to being so happy with her life, feeling that she belongs in the Carolinas, and doesn’t miss Scotland. Her words seem to speak for Ian and where he’s at after having embraced the Mohawk, and although he says he can’t return, something is bothering him, deeply.

As Roger prepares to depart for his survey of the land from Tryon with Ian, Brianna gives him a paper airplane. She uses this as a metaphor about their marriage and how it can continue to grow into something stronger. For a moment, I thought Roger would leave the paper airplane behind, but he puts it in his satchel. The survey commences, but Roger is still silent, and Ian still mournful.

At Fraser’s Ridge, Claire discovers some of the poisonous hemlock roots are missing from the jar. Warning: It will kill if taken without guidance, and as much as was stolen could be misused.

Ian and Roger are sitting beneath a tree, taking a break from surveying. Roger shows Ian the paper airplane. Ian equates it to a bird. They stare up into the sky, and the next thing we know is Roger is waking from another nightmare. Ian asks him about his dreams Roger still doesn’t speak.

Claire fears Roger took the hemlock and plans to do himself harm. She mentions this to Jamie, who is reminded of those many years ago when he didn’t want to live after Black Jack’s abuse.

Roger’s next flashback begins with the black and white motion picture, but this time it changes quickly to color, life-like footage. Roger then recalls the last image in his mind before the barrel is kicked from beneath his feet–it is Brianna’s face, her smile. She is his final thought.

Roger awakes to Rollo’s whimpering. The dog has been tied to a stake in the ground.

In a twist, we learn that Ian stole the hemlock. Roger finds him in the nick of time, kicks the poison tea away from the fire, and a fight ensues. Ian wants to know why Roger would stop him. He watched Roger standing on the edge of a cliff and knew what was on his mind. Ian wants him to explain why he’d take his life when he still had everything–a wife and a bairn. Ian demands that Roger tell him what he saw as he dangled from the noose. Roger confesses; it was Brianna.

This is where Ian finally admits that the love of his life is not dead, but she is lost to him (which means we will likely see her soon). The two men talk and ride back to Fraser’s Ridge together.

Roger returns to Brianna–and he’s talking! The joy is apparent in her eyes, and she smiles when he remarks that now she is the one lost for words.

Roger reminds her of the conversation they had in 1969 about the last words. He admits that last words don’t matter, it was the last face he saw that mattered the most, and it was her face. He then adds he will always sing for her.

The closing credits are a duet–Roger and Brianna (Richard and Sophie) singing Clementine.

See you next week for Episode 509, Monsters and Heroes.

Denny S. Bryce is an award-winning author and three-time RWA Golden Heart® finalist, including twice for WILD WOMEN AND THE BLUES, her debut historical fiction novel coming on March 30, 2021. @dennysbryce
All Posts
PrevPreviousLove YA: Top 3 Y.A. Reads for the Week of April 14th
NextIn Conversation with Ally JamesNext