Texts From A: 9 Ways They Indicated THIS IS THE FUTURE In Season 6 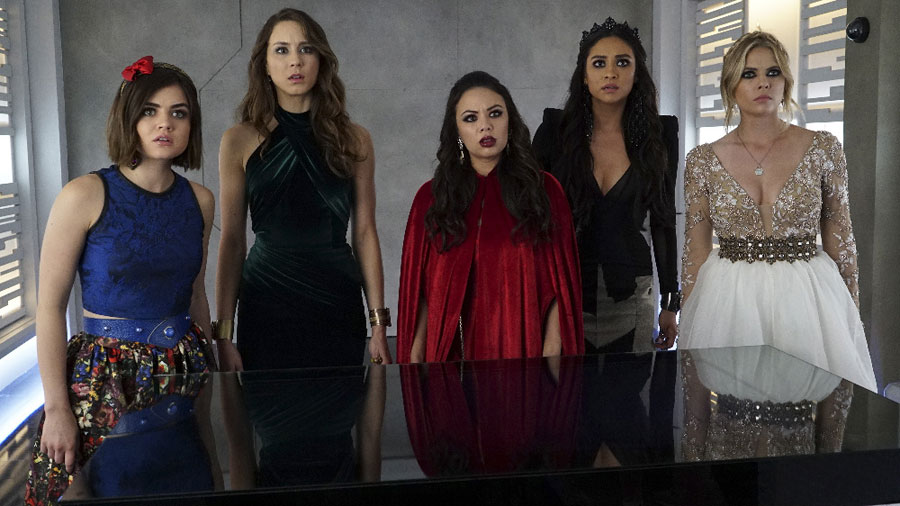 Hello, friends, and welcome to the penultimate post of Texts From A, where I’ve been binging Pretty Little Liars and telling you all about it. The show officially left Netflix the day after I finished it, and…well. Pretty Little Liars sure is a show that exists, huh?

I’m getting ahead of myself. This post is just about season six, which is a pretty big season! We discover the identity of the…second “A”? First “A”? I still don’t really understand the “A” timeline if I’m going to be honest. But if I do understand correctly, it’s revealed that CeCe Drake is actually Charlotte DeLaurentis and also she’s transgender and also she’s “A” – I think becoming “A” after meeting Mona in the mental institution and hearing her stories of being “A”?

…But that doesn’t make sense at all in terms of timeline. Was CeCe just visiting Mona? There’s a thing where Mona, while drugged up, thought CeCe was Alison.

Anyway, CeCe/Charlotte is some version of “A”, and is the version that kidnapped the girls and kept them held hostage for over a month in an underground maze-bunker. But she’s also Alison’s secret sister whose transphobic father got her locked in a mental institution until she and her mother faked her death so that she could both officially discard her dead name and become Charlotte, and to hide her from her father. Alison’s parents, naturally, decided to pretend their third child had never existed. Alison was a baby and so didn’t remember Charlotte anyway, and they told Jason that Charlotte had just been his imaginary friend.

So, yes, the stalking and kidnapping and mental torture, but she’s also got a pretty sympathetic story. Charlotte turned on the girls after Alison’s death. Charlotte actually believed herself responsible for the death-that-never-really-was, and when the girls didn’t seem to be properly mourning Alison, Charlotte turned all that rage and guilt onto them.

We find out she’s “A”, the girls hear her story and are very sympathetic to it, the show, uhm,

skips forward five years in the middle of the season,

and at the start of that five-year jump, Charlotte is murdered.

They introduced a trans character in one episode, and killed her in the next.

I can’t speak too much on the trans representation here and whether it’s good or bad. It does a few basic things right while also doing a lot wrong. As a cis person, I don’t feel qualified to say where it ultimately lands (though my guess is: not in a great place!) I suggest Googling for a trans perspective. Here’s a post on Reddit that seems to have come directly after CeCe/Charlotte’s trans and “A” reveal, to get you started.

After Charlotte’s death, the show becomes primarily about her murder and the new “A” in town. They’re called Uber A for awhile, but I hate that and they eventually become known as AD, so that’s what I’ll call them. AD believes the girls (uh – women, I guess, since the time jump?) know who killed Charlotte, and so the threats and blackmail begin anew.

As you can tell, there are many things I could talk about in a season six post. The beginning of the season is all about the girls in the underground maze-bunker. They deal with a lot of PTSD. We find out about (an) “A”.

But I can’t stop thinking about the five-year jump. Literally, at the end of episode 10, we suddenly get a “five years later” and then the rest of the season and season seven are in that time period – a time period that I’m pretty sure is technically a year or more in our future.

2. Everyone is broken up. As we all know, sequels and time jumps all require break ups because how else do you build character tension? [/sarcasm]

3. Emily’s dad is dead. Someone had to be dead for it to really be the future.

5. I doubt this was a purposeful choice or anything, but Alison gained some weight and she looks good.

6. AD uses emojis in their threatening texts. Nothing says ~ The Future ~ like emojis.

7. Also, the texts now show up on the screen floatation-text style because…why not?

8. Alison is now teaching at Rosewood High, because it’s very important always that someone remains tied to the school when a high-school-based show moves beyond it.

Sarah Hollowell is a fat Hoosier writer working to up the magic quotient of Indiana. She's been published on Huffington Post, Fireside Fiction, and Apex, among others. She spends most of her time binging podcasts and needle felting characters from Animal Crossing.
All Posts
PrevPreviousDaily Frolic: Color in Cute Guys for National Coloring Book Day!
NextPassion 101: My Go-To Stack of Sensual Reads By Lisa BarrNext